Then, in Through the Looking-Glass, Alice begins to become an adult in her own right. In this book, modeled after a game of chess, she eventually ascends to being a queen, i.e. adulthood, after a long journey, during which she learns to be a grown-up. Unlike in Wonderland, Alice isn’t so easily controlled in Looking-Glass World. In some cases, she sets the rules, and often finds herself asserting dominance over the characters who try to confuse and upset her. Many people mistakenly assume that the Alice of the novels is a blank slate, but she is actually undergoing a rather complex arc, albeit one which requires more attention to notice, since so much of it is based on her reactions to situations happening around her. 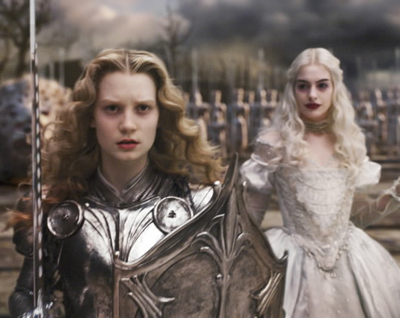 This mistaken assumption is most likely one of the main reasons Burton and Woolverton felt the need to change Alice for this film. Much as she did with Belle in her screenplay for Disney’s Beauty and the Beast, Woolverton takes a female character whose original portrayal she perceived as being weak and tries to change her into a feminist icon. While this worked for Beauty and the Beast, her attempts here fall short. The Alice of the novels has already learned to be an adult. Why, then, does this supposed sequel to the novels require Alice to return to Wonderland, ostensibly to learn how to become an adult? It is narratively redundant and seems to be preaching the message that Alice has to discover that she doesn’t have to allow society to dictate who she should be or who she should marry, if she marries at all. Yet, as soon as she arrives in Wonderland, these characters are also pressuring her to be someone she is not. Throughout the film, she repeatedly tells them that she is not the kind of person who could slay a monster. In the end, she finally gives in, puts on Joan-of-Arc-esque armor and performs the task because she feels she must. The change, however, isn’t the product of subtle or well-developed character growth but is instead an abrupt decision Alice makes because she feels she has no other choice. She goes into the fight as unprepared to be the warrior they need her to be as she is unprepared to be the future wife of a lord her mother needs her to be. Upon returning home from Wonderland, though, she suddenly decides to be her own, autonomous person, something which this specific journey hasn’t prepared her for at all. And what in the name of Reverend Charles Dodgson do swords and grim battle have to do with a whimsical tale Carroll dreamed up on a “happy summer day,” to entertain a young girl and her sisters?

The answer is “very little.” In attempting to assert order over Wonderland, Burton’s film turns the story into a bigger mess than he seems to have believed the original to be. Woolverton and he seem to want to create a neat, streamlined narrative, but in so doing, they open the story up to rather sizable plot holes that are both jarring and unnecessary. It leads one to raise questions such as why Alice, who has no training or skills, should be the one to defeat the Jabberwocky; why these people–who actually seem rather reasonable and not that mad at all–haven’t staged an uprising before now. Meanwhile, other details are over-explained. The Red and White Queens are given names, as are their palaces, which makes the world too grounded, logical, and specific. We even get a melodramatic flashback from the Mad Hatter, remembering his horror at the Red Queen’s invasion. Additionally, the Queen of Hearts from Wonderland and the Red Queen–a chess piece from Looking-Glass–have been clumsily conflated, leading one to wonder why a deck of cards is battling one half of a collection of chessmen on a chess board. 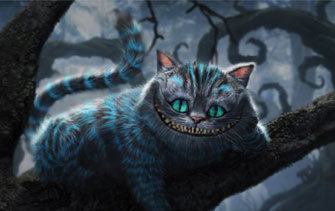 Lewis Carroll is a master of nonsense precisely because his nonsense is so nonsensical that it makes an ingenious sort of almost-sense, if you squint hard enough and in the right direction. Tim Burton’s story, on the other hand, isn’t nonsense. It just doesn’t make sense, which is a very different thing altogether. I’m usually firm in my belief that films should stand on their own and not be judged by their source material. If a director or writer wants to put a new spin on old material, I tend to applaud that attitude–novels are not sacred texts that should never be altered or changed. Tim Burton’s Alice in Wonderland, however, isn’t a fresh, innovative take on a classic that encourages the viewer to see an old story in a brand new light. Instead, Burton has taken a very special story, broken it down into jagged shards and sloppily reassembled it, making it infinitely less special and removing its heart, ingenuity, and depth in the process. It’s enough to make you as mad as a hatter.