Poor Gerald Dunwoody. A lowly Third Grade Wizard working as an inspector for the Department of Thaumaturgy who loses his job after inadvertently blowing up Stuttley’s Superior (Wizard) Staffs factory and thereby discovering he may be a far more powerful sorcerer than anybody previously realized, Gerald soon finds himself moving to the faraway tiny kingdom of New Ottosland, along with his talking bird, Reg (a former despotic queen who was cursed years ago to be trapped in this form, as punishment for her actions), in order to become Court Wizard to the possibly mad King Lional in Karen Miller, writing as K. E. Mill’s, highly entertaining fantasy novel, The Accidental Sorcerer, the first book in her Rogue Agent series.

At first glance, The Accidental Sorcerer seems like it will be a simple comedic romp of a book, as yummy as cotton candy and half as substantial. As the story progresses, though, it proves itself to be made of far stronger stuff. Miller’s world–think along the lines of Rowling crossed with Pratchett along with a pinch of steampunk–is solid and her characters even more so. The protagonists feel like real people, despite the sometimes (deliberately) silly world in which they live, and the reader comes to care for them. One of my issues with a great deal of comedic fantasy is that I often have trouble getting past the jokes and truly empathizing with the characters or taking them seriously. This book, though, balances its humor, characterizations, and drama deftly and sincerely.

Even more impressively, what begins as a silly yet enjoyable lark, soon evolves into a pointed and profound satire of bureaucracy and government, and then eventually into a rather heartstoppingly suspenseful (at times, grim) ride, without ever losing sight of its characters, its sense of humor, or its central themes. By the end, it has shifted into more of a dark fantasy adventure than a Discworld-esque burlesque, while also ultimately remaining optimistic. Miller puts Gerald through hell, more so than one would ever expect from the opening chapters, where the threats that he faces are more slapstick than sinister, but by the end, he has developed to the point that the reader is more than eager to follow his upcoming adventures. 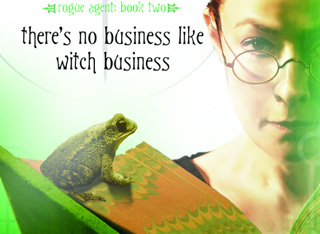 And they are richly rewarded in Witches Incorporated, its lengthy but brisk sequel, which is so phenomenally entertaining and artistically successful because instead of only delivering more of the same mix of hilarity, mystery, and surprising darkness as the first novel (though it does that, as well), it re-calibrates the magical formula, allowing us to see the characters we grew to love and the world we came to know in the first book from a completely different angle.

Whereas The Accidental Sorcerer is mainly set in faraway New Ottosland, Witches Incorporated returns the action to Ottosland. Furthermore, it abandons Gerald for vast stretches of time, allowing us to spend time with the decidedly ungirly and brilliant Princess Melissande from the first novel, who has now formed a witches’ detective agency with the eccentric but breathtaking Emmerabiblia Markham, sister to Gerald’s good friend, Monk, and Reg.  Over the course of the novel, Gerald’s first mission as a spy for a top-secret branch of the government (a position he gained at the close of the previous installment and the reason he is separated from Reg) comes to intersect with what seems the most frivolous of Witches Incorporated cases–namely, the wealthy proprietress of a prestigious airship company has hired them to discover who has been stealing biscuits and office supplies from her company. As one might expect, wackiness ensues.

But, much as in the first novel, what is perhaps most impressive about the Rogue Agent series is that, while it can be very silly (and purposefully so), it also has more complex aspirations.  Underneath the frivolity and fun, Mills weaves a serious examination of power and the evils that can occur from the misuse of such.  In the first novel, Gerald and Melissande, in particular, suffer a great deal of psychological trauma at the hands of Melissande’s brother, who attempts to compel Gerald to use his heretofore unsurpassed magical skills for dominance and destruction. While Witches Incorporated, much like the series’ first entry, is full of quick-witted, snappy dialogue, punnery, and campy capers, and Reg is always an absolute riot, the characters continue to experience the effects of the previous novel. Gerald is still haunted by what he was forced to do just as much as Melissande’s ability to trust has been all but shattered. These shades of darkness never overwhelm nor counteract the fun of the novel, but they do ground the characters and make them far more compelling and fully realized than those of the average comic fantasy.  These characters are products of their experiences, which never cease to shape, affect, and inform their current actions. Gerald also remains in the uncomfortable and often frustrating position of having to assume the identity of a failure, despite the fact that he is more powerful than most wizards combined.

Ottosland is also a fascinating and enchanting world to visit–an alternative universe that owes a debt to secondary world fantasy as much as it does to the Victorian era and steampunk. Imagine a magical post-Victorian society in which women’s lib has only just started to come into vogue recently and so chauvinism is still mostly ingrained, particularly in the older generation that believes that women cause spells to misfire, where people communicate via crystal balls, where dirigibles are just beginning to be replaced by magical transport systems not too dissimilar from Star Trek‘s transporters though run on magic rather than pseudo-science, and where the government employs undercover wizards and sorcerers to protect the world from power-hungry wizards and sorcerers. Mills impressively manages to satirize both old-fashioned and current society, while also weaving in themes of bureaucracy, morality, and faulty societal beliefs (such as the inferiority of women) that comment and reflect upon the series’ key question of power–who wields it and how.

At the same time, Witches Incorporated is also simply a delightful yarn, reuniting us with the outlandish but lovable characters from The Accidental Sorcerer, along with an enemy or two, and introducing us to a whole new cast of friends, allies, and enemies, ranging from the bewitching to the oddball to the ghastly.