Maurice Sendak’s seminal children’s book, Where the Wild Things Are, has endured so long as a classic work of literature for the very reason that many parents were so afraid of it when it was first released–it is a primal, at times frightening, tale of a young boy rebelling against the polite constraints that his mother enforces on him,and traveling to another world where he can embrace the impulses that tell him to run wild and misbehave. 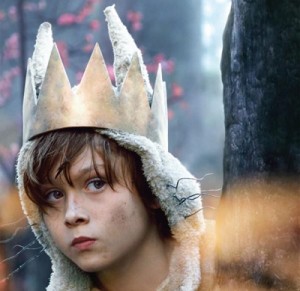 Unlike so many children’s stories that sugarcoat the world, the world of Sendak’s book is often dark and perilous, but it also gives his boy hero, Max, free reign to discover, to have adventures, and, yes, even to grow. In a mere ten sentences and a handful of pages full of gorgeous artwork, Sendak sends his be-wolf-outfitted Max on a quest to face down terrifying monsters, which he swiftly tames, and returns him home before his soup can get cold. Where the Wild Things Are argues for the importance of allowing children to explore their own imaginations, as scary as they may be, and to know that they can always return safely afterwards, with the encouragement and acceptance of the people who love them.

Spike Jonze’s film version captures the aura of Sendak’s novel perfectly. It is not an adaptation of the book but rather a reaction and rumination on its central themes by an adult filmmaker, looking back at one of his favorite childhood tales and attempting to externalize what it meant to him. Where the Wild Things Are is such a slim volume that there are an infinite amount of theoretical full-length feature films that could have been drawn from the source material, depending on the director. Therefore, this does not strive nor claim to be the definitive version of Where the Wild Things Are; it is, rather, Jonze’s Wild Things, i.e. the film that played in his head as he was a child, reading the book. The film, thus, dramatizes the psychological projections that he, as a boy, laid onto Max, in identifying with him. This is his story as much as Sendak’s.

In the afterword to the companion novel he wrote for the film, The Wild Things, co-screenwriter (and brilliant author, in his own right) Dave Eggers explains that the original Max is a representation of Maurice Sendak’s childhood and confirms that the Max of the film is a representation of Jonze’s childhood. All we know of the original Max is that one night, after he misbehaves and causes a ruckus, his mother sends him to bed without supper, leading him to dream up an escape from his existence, to somewhere he could roam free and play with creatures who understand him, albeit creatures who eventually turn on him when he announces his intentions to return home.

Jonze’s Max misbehaves for more specific reasons, centered around the fact that his divorced mother is currently dating a new man. Max is a young boy, confused and scared that his world is spiraling out of his control; things are changing and there is nothing he can do about it. Max Records, the wide-eyed young boy who plays Max, does so without a hint of the saccharinity that mars so many child actors. He is neither irritatingly lovable nor irritatingly bratty. He is just, simply, an authentic little boy, who has not yet lost his sense of awe or wonder and who still imagines and yearns and dreams. Everything that happens to him while away on his adventure is, in some way, a reflection of the issues that he is trying to work out–not only with his mother, but with the world at large. Similarly, the film reflects the novel. Images and references to the book appear at odd moments. In the most unexpected example, a key line from the book is reworked to surprising and stunning effect, thanks to gorgeous vocal work from Lauren Ambrose as one of the female Wild Things, KW. 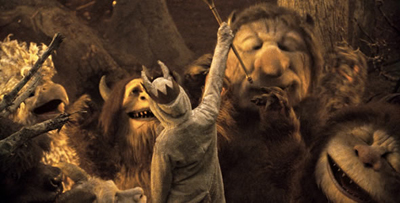 Where the Wild Things Are is filmed in a singular style that manages to keep the production grounded in reality, even when it is at its most whimsical. The colors remain golden and muted throughout, as if Jonze is trying to grasp the hazy period of childhood where one is on the cusp of understanding so many things but is still young and innocent enough to want nothing more than to play the day away. There is a starkness to the visuals and a darkness to the humor that makes everything seem simultaneously down-to-earth and slightly off-kilter. In the words of my partner, the film looks like the music of Belle and Sebastian sounds–both earthy and ethereal, straightforward and fanciful, stunningly beautiful and deceptively simple.

The production’s sense of reality is helped by the fact that the Wild Things are physical beings, rather than computer-generated creations. One can sense the weight to their steps and practically feel their heft bounding through the forest and smashing into trees and rocks. They are a perfect marriage of puppet and CGI. Their enormous bodies provide the sense of awe and danger that cannot be recreated by a child actor reacting to things that are not there, while their computer-animated faces provide a range of emotion reactions beyond the ability of most conventional puppetry to capture.

Where the Wild Things Are is a very funny film that manages to flawlessly capture the rhythms of a child’s mind. We are constantly viewing the world from Max’s perspective. More specifically, all of the Wild Things are external representations of Max. Although they are large and foreboding and truly dangerous, they speak like children. They talk about wanting to be a big family and to always sleep together in a “real pile”. Their conversations with one another sound like those between children on a playground, not between fearsome creatures in a forest. James Gandolfini was such an inspired choice to play the lead Wild Thing, Carroll, because, as with his renowned performance as Tony Soprano on The Sopranos, he is able to blend a tough guy exterior with a teddy bear sweetness. He is gentle and childlike but can also be terrifying. This film beautifully taps into children’s dreams and how easily they can tip from fantasy into nightmare and back again. 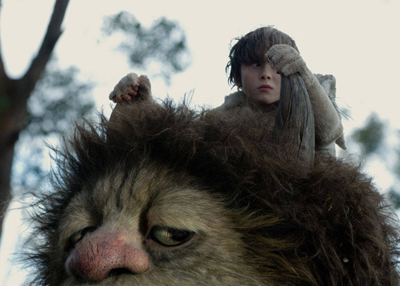 And as funny (and scary) as Where the Wild Things Are can be, there is a sadness that permeates it as well. The film Max has the book Max’s sense of free-spirited adventure, but he is also weighed down by a psychic burden. He knows, on some level–even if he isn’t quite yet mature enough to understand it–that this escape is not a permanent solution and that he must eventually travel home for his life to be better. It is as if some deep, subconscious part of himself can sense that his adulthood is somewhere around the corner. Change worries him, but what his voyage teaches him more than anything else is that he is not the center of the universe. His prolonged wild rumpus ultimately teaches him about responsibility and causality. He tries, and fails, to be a king–in other words, a parent–and in so doing, might come to understand his beleaguered and overworked mother (Catherine Keener) a bit better.

Where the Wild Things Are is not really a film for children. It wouldn’t seem right to show the film to a child, who might fill in the blanks Sendak left in the story, with Jonze’s vision, instead of his or her own. At the same time, neither is it an ultra-hip, cynical deconstruction of a children’s book by an adult who has aged past the ability to truly understand it anymore. Never before have I seen a film that so ably recreated the way a child’s mind works and was able to remind me how exciting it once was to, for example, build a fort of pillows and hide inside for hours. Spike Jonze’s Where the Wild Things Are isn’t a film for children but for parents. It seems to posit that a great deal of the time, parents and children have difficulty communicating, because the adults have forgotten what it’s like to be children. For a brief 90 minutes, it, therefore, returns them to a time when they also had difficulty expressing their thoughts and needs in words and had to create their own imaginative worlds inside their heads, to deal with their troubles–worlds into which their own parents just couldn’t be invited.