I know what you’re thinking: another vampire series? And, believe me, so was I. Except M. L. Brennan’s Fortitude Scott novels, Generation V and Iron Night are different. No, really.

Fortitude is a vampire. Or will be. But he’s not exactly like any vampire or almost-vampire you’ve seen before. In the world of Brennan’s books, vampires aren’t immortal, although they have dizzyingly long life spans, and creating one isn’t nearly as easy as a vampire draining someone of their own blood and replacing it with their own. It’s a complex process that rarely works, involving draining a host couple, replacing their blood with vampire blood, and then hoping that they both survive the process and that their eventual union will result in a baby–a baby who will start off mostly human, with the need to drink blood only rarely, but gradually becoming more vampiric as he or she ages. At the start of Generation V, Fortitude is in his early twenties and still mostly human, both physiologically and mentally.

In many ways, Fort is the anti-urban-fantasy hero. When we first meet him, he doesn’t have any particular powers of any sort. He isn’t suave or cool. He isn’t super handsome. He doesn’t have tons of contacts within a supernatural underworld. He’s actually kind of lame. He’s a college grad with a useless Film Studies degree who lives in a crappy apartment with a roommate who doesn’t respect him and rarely deigns to chip in with the rent. He has a dead-end barista job that pays next to nothing. He has a girlfriend who openly cheats on him (even with his roommate, no less!), repeatedly calling it an “open relationship,” even though he never agreed to the terms.

And he has a mostly terrible relationship with his family. There is a great deal of bad blood (post-pun apologies!) between them–particularly when it comes to his mom, Madeline, and older sister, Prudence–for reasons I hesitate to spoil, but what I can say is that their differences center on his humanity and their lack of such, from his perspective. To Madeline, Prudence, and to a far lesser extent, his older brother, Chivalry (the only family member with whom he has a fairly close relationship), humans are either a means of sustenance, disposable, or simply not their concern, and Fort stubbornly refuses to think like that and fears that when he eventually comes into his powers that he might began to behave as the other Scotts do.

The plot of the first novel is set into motion when a pedophiliac vampire from Europe visits their territory in Rhode Island and abducts two young girls. Fort refuses to stand idly by when children’s lives are at stake, but his family refuses to do anything to help. From Madeline’s perspective, while she may frown on this vampire’s proclivities, to interfere with his actions would be a violation of the laws of hospitality that she extended to him when he arrived, not to mention potential grounds for discord between the vampire clans, and again, human lives–even young ones–are inconsequential. 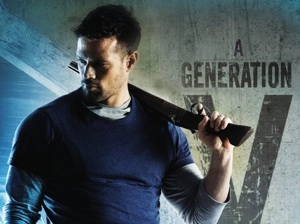 And so Fort goes forth, without the help of his terrifyingly powerful and influential family, but with the aid of Suzume, a fast-talking, flirtatious, mischievous kitsune–a shapeshifting human/fox from Japanese mythology. If Fort is the opposite of the typical urban fantasy hero, Suzume seems to be a deliberately pointed, almost-exaggerated amalgamation of every female urban fantasy heroine ever. She’s hot, funny, oozes confidence, has amazing powers, and is much better suited to this gig than Fort. The juxtaposition between his more mundane behavior and character and her infectious effervescence makes for great Odd Couple comedy that hints at potentially growing into something more.

Generation V deserves enormous credit for its excellent character writing and development, its imaginative, original mythology, and more, but what likely impressed me most about is its blending of tones–it can be very dark (I mean, the villain is a homicidal pedophile) but it also manages to not be mired in darkness; much of it is funny, although the characters are never disrespectful of the stakes–as well as its lack of a standard urban fantasy plot. Unlike most novels of its type, Generation V is not a mystery, which is a refreshing change. Fort knows exactly who the culprit is from the beginning. Any investigations done are in the service of tracking him down, not figuring out his identity.

And this is also probably why I like it a bit better than its sequel, Iron Night, which centers on a murder mystery of who killed Fort’s new roommate. Don’t get me wrong. Iron Night is still an excellent book: an engaging, page-turning read that delves deeper into the vampire world of Brennan’s novels as well as some other supernatural communities only seen briefly in Generation V, particularly the elves. Brennan’s spin on them is nearly as dark, compelling, and unusual as her take on vampires, and Fort’s gradually evolving relationship with his family, as well as his gradually evolving nature, period, makes for some fantastic drama. I particularly love Fort’s relationship with his brother, Chivalry, who truly does want the best for him and constantly looks out for him–Chivalry is a terrific character, a gentleman vampire from an earlier era of gentility and grace, whose very being is at odds with the modern world–but it’s also amazing to see Fort, for the first time, having to work with his apex predator sister, Prudence, rather than simply being fearful of her.

Brennan also does a fabulous job throughout of crafting strong A-plot stories while continuing to weave a larger arc in the background. Unlike some series, however, what I love about that B-plot is it isn’t (at least yet) part of an overly complex, world-spanning mythology involving apocalyptic forces and whatnot but is instead completely focused on Fort himself and his familial relationships. It’s refreshing to find a vampire story that’s so, well, down to Earth.