From the moment I saw a bunch of young campers fleeing in terror from a werewolf on my television screen, a huge, storybook full moon shimmering in the background while the strains of The Munsters theme song played, one thought ran through my head: Bryan Fuller is back, baby.

Ever since his masterpiece, Pushing Daisies–the single greatest series to ever grace the televisual medium, in my humble opinion–was struck down at the untimely age of one-and-a-half seasons, I have longed to return to his twistedly enchanting, candy-colored world, populated with eccentric characters, dazzling wit, matter-of-fact magic, and existential dilemmas, and suffused with underlying melancholy–a trait that unites all of the series Fuller created, including Dead Like Me and Wonderfalls. And, with NBC’s special airing of the Mockingbird Lane pilot, I finally had the chance.

Now, as a Bryan Fuller fan, I am more than accustomed to the feeling of loss that occurs when a beloved story is cut off before its natural end to the point that I’ve come to view being a Bryan Fuller fan as the ultimate example of the importance of living in the now. I appreciate every one of the man’s shows and love each new one with all of my heart, sometimes all the more fiercely due to knowing that tomorrow, it very well could be gone. My partner and I have actually joked in the past that Fuller must have made some sort of mystical deal that allows him to consistently generate the most awe-inspiring works of imagination in television history, with the catch that none be allowed to last longer than two seasons.

Mockingbird Lane, though, might be the most extreme case yet. After a long development process marred by numerous delays, the pilot was finally shot, but apparently NBC wasn’t thrilled with how much it cost and possibly its creative direction, and so they instead decided to air it as a one-off Halloween special with the possibility that good ratings could lead to a Season 1 pick-up. And so the episode that aired this past Friday night might potentially be the start to what could become one of the most gorgeously designed, freewheelingly imaginative series in television history…or it could be the only glimpse we’ll ever get of what The Munsters as re-imagined and filtered through the mind of Bryan Fuller looks like. I’m hoping for the former but, while watching the pilot, I prepared myself for the latter, experiencing every moment as fully as I could and appreciating that I was able to see it at all. 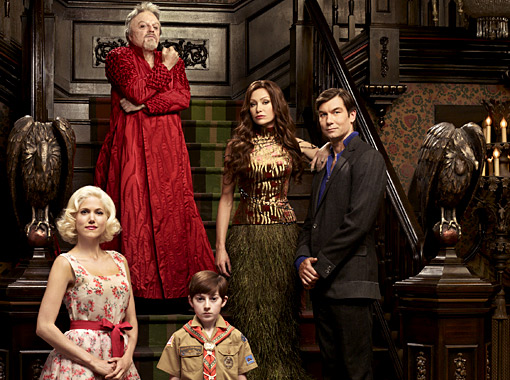 In any other case, if NBC or any other network decided to greenlight a reboot of The Munsters, I might have expected it to be a disaster, but the moment I heard the name “Bryan Fuller,” I knew that it was an absolutely perfect idea. I can’t remember the last time I encountered a more fitting marriage between creator and concept. Fuller’s dreamy fairy tale concoctions have always been about merging the mundane world with the fantastical and the supernatural; about viewing the seemingly familiar through kaleidoscope-tinted lenses; about using magic, along with a light approach to dark comedy, in order to shine a metaphorical light on human emotions, passions, hopes, and regrets. If anyone could take a short-lived, 1960s cult classic about a family of monsters from the classic Universal horror film catalogue who live in modern-day suburbia, oblivious to just how strange they actually are, and update it into something that feels both contemporary and relevant, it is Bryan Fuller, and that is largely due to his ability to flawlessly meld the modern-day with yesteryear, creating a world, as on Pushing Daisies, that feels current, nostalgic, and timeless, all at once, and to populate it with characters who are both archetypes and searingly three-dimensional beings at the same time.

And that’s really the key to why Mockingbird Lane works so well. Its cheerfully macabre tone calls the original series to mind, along with numerous references and in-jokes that specifically recall running gags from The Munsters, cleverly updated, and it also manages to get to even darker places but without ever for a moment losing its heart (literally). And the way it retains that heart is through the character development. The Munsters would not work today in its original form. The world is far too, well, worldly today to accept that the members of this family could live amongst average humans and not realize that they are different from them, nor to accept that they could manage to shock people every time they step outside. So, instead, Fuller decided to tone down their external monstrous appearances, while ironically making their behavior more monstrous. This is because we demand more from our genre show mythologies today. The joke in the original show was that, besides their bizarre exteriors and affection for the grim, all of the Munsters were actually quite normal, nice people. On Mockingbird Lane, however, the Munsters have to deal with their differing biologies. For example, Grandpa isn’t a lovable jokester who teasingly reaches for peoples’ arms to bite–he’s a full-on vampire who flat-out eats people, as does Lily.