If Sarah creates the Goblin King, however, she is also responsible for the aforementioned bulge in his crotch, which actually has a bit more to it than meets the eye. For a film that is steeped in the trappings of children’s literature, this is practically the lone adult or sexual element to be found, and if one follows the vaguely Freudian overtones of that bulge to their natural conclusion, it is that Sarah’s subconscious is telling her that it is time to grow up. She may not be quite emotionally ready to take on all that becoming an adult implies (sexually speaking–and although Toby is her brother, the fact that she is risking life and limb to rescue a baby also hints at her future motherhood), but Sarah can definitely recognize romance, as an abstract concept. There sometimes seem to be two Jareths: the menacing villain who kidnaps her brother, and the strangely intriguing man who captivates her in an entirely different way, particularly during the ballroom scene.

In her final scene with Jareth, he reveals how the two seemingly contradictory aspects of himself are entwined in Sarah.  He wants to both rule her and to be her slave. In other words, he wants her to remain trapped in her dreamworld forever, so that he can keep controlling her through the stories she invents. When she finally says, “You have no power over me,” she is realizing that she is the inventor and the master of her imagination, not the other way around. Jim Henson’s message seems to be that growing up isn’t about discarding fairy tales but continually revisiting them, throughout your entire life if necessary, retaining your sense of childlike wonder and imagination, but not to the detriment of embracing the adult world and the wonders it has to offer, as well, which, if you think about it, is a far more optimistic message than the one Dorothy receives–that she should learn to love dreary Kansas–or Alice receives–that she has to become an adult in order to blend into the incredibly curious and infinitely frustrating adult world surrounding her. Sarah is given license to remain a child at heart, which is one of the reasons the film remains a favorite of mine. 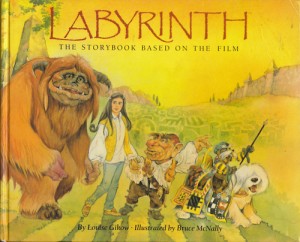 Before I sign off, I must mention two more things. The first is how the film rewards repeated viewings. The best example is perhaps when Sarah first finds Ludo chained up and being tortured by goblins. She wishes for something to throw at them and suddenly, a rock appears. And then another. The first time through, one might think that her wish makes it so. Later on in the film, we learn, however, that Ludo has the power to magically call rocks to him. Sarah never mentions this first meeting again, though, so it is up to the perceptive viewer on successive viewings to realize that Ludo is providing the tools by which she sets him free. The second thing I want to point out is the clever naming of the dogs. In the “real world” portion at the start of the film, we meet Sarah’s shaggy dog, Merlin. A very similar dog appears in the Goblin Kingdom, Sir Didymus’s steed, Ambrosius. The fact that he is the dream version of Sarah’s dog is implied in the name. In 1136, Geoffrey of Monmouth wrote Historia Regum Britannie, or The History of the Kings of Britain (despite the word, “history,” it was filled with myth and inaccuracies), which includes one of the earliest written accounts of the legend of King Arthur. The full name of his wizard, as written in that book? Merlin Ambrosius. A relatively minor detail but one that underlines just how special and fully realized a film and world Labyrinth is.

But, again, with creative minds such as Jim Henson and Brian Froud at the helm, what else could one expect? 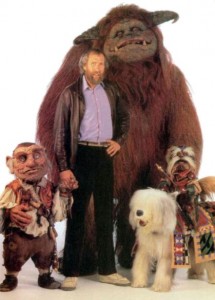 Many of the above images were found at Labyrinth Nook.

Check out our tribute to Jim Henson here.