Currently, I’ve been rewatching and blogging on The Adventures of Young Indiana Jones, continuing last week with the twentieth chapter, “Mystery of the Blues”. Before proceeding with the next chapter, here are a few things you should know, if you haven’t read the earlier post: 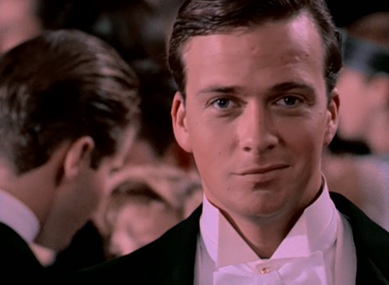 The penultimate episode of Young Indiana Jones seems to have been specifically designed for me, basically being a musical, or at least stuffed to the gills with classic, mostly Gershwin showtunes and big musical production numbers, and although no one just bursts into song without a narrative explanation–either being on stage, or, in the case of Gershwin, who naturally befriends Indy in this episode, composing at a piano–nearly all of the songs are thematically pertinent to what is going on in Indy’s life. The main thrust of the episode revolves around Indy getting a job as an assistant stage manager for the still-in-rehearsal musical revue, George White’s Scandals of 1920, which is the Ziegfeld Follies‘ main competition.

Well, actually, that’s not quite accurate. The main thrust is actually Indy working hellish hours at this show (and, in another example of the series’ fantastic sense of continuity, Indy brings up the time he spent working at the Russian Ballet in his interview), whilst also trying to juggle romances with three women at once: the first, Peggy Peabody, a sweet, young ingenue with dreams of Broadway glory; the second, Kate Rivers, a Bohemian, Greenwich Village-dwelling, world-wise poet and critic, Kate Rivers (played by a young Anne Heche); and the third, Gloria Schuyler, a drop-dead gorgeous, manipulative, blonde socialite, all three of whom Indy meets under different circumstances and can’t seem to figure out who he loves most. In addition to that, further complications set in. Peggy, who he meets first but loses track of and has no idea how to find, winds up in the very show he’s working for, a show that is now being funded by Gloria’s father, who might pull his backing were he to hurt her daughter. Meanwhile, Kate ends up as the reviewer for the show on opening night. Despite all three girls living in very different parts of the city and traveling with very different social circles, the fates, naturally, conspire to unite them at the worst time possible.

Basically, the plot has all of the makings of a classic, door-slamming musical comedy farce, and the episode has an absolute ball practically torturing Indy, as he’s forced into lie upon lie to cover his tracks, sometimes getting no sleep and having to eat multiple lunches or dinners in order to juggle each of the women, each of whom relates to him on a completely different level. Given how many times Indy sheds girlfriends in the original series, as well as the number of girlfriends he has over the course of Young Indy, it feels practically meta at times, with all of his worst tendencies when it comes to romance blowing up in his face at once. You just knew a kid who first fell in love at the age of 9 or so to Franz Ferdinand’s daughter would end up being trouble! I have to admit that at times I found myself getting incredibly tense during many of the near-misses, which actually negatively impacted my enjoyment of the episode to a degree. Having seen it now, I think I might enjoy this one a lot more on a second viewing, without having the suspense of when he’ll be caught.

And the aspects I enjoyed far outweighed my discomfort. The episode captures the pulse of 1920s New York City life beautifully, with the frenetic backstage hysteria and Indy’s bouncing uptown, downtown, and every place in between in an effort to maintain these three relationships, all while going ever-so-slightly insane, providing a perfect backdrop and amplification of the excitement of this post-WWI era. It’s also very funny, has a nice follow-up to the plot of the previous episode, when Indy reconnects with Sidney Bechet (Jeffrey Wright) from the previous episode, in Harlem, which leads to his meeting Gershwin and getting the stage managing gig, and furthermore features more historical appearances/cameos than possibly any previous episode to date, with the full list including the aforementioned Bechet, Gershwin, and George White, Ann Pennington (a musical theatre actress), critic Alexander Woollcott, novelist Edna Ferber, columnist Franklin Pierce Adams, playwright Robert E. Sherwood, humorist Robert Benchley, playwrights Beatrice and George Kaufman, legendary composer Irving Berlin, and an even an appearance from Indy’s old wartime pal/frenemy, Ernest Hemingway! Speaking of which, while the Hemingway-in-the-audience cameo is delightful, I was a bit disappointed that we never got to see him interact with Indy. It was perfectly fitting, though, given the plot of his previous episode, that he be there for an episode about Indy’s love-related woes.

I also have great affection for the running thread of Gershwin’s classic song, “The Man I Love,” which, throughout the episode, no one appreciates–the pianist keeps playing it too quickly, Ann Pennington refuses to sing it correctly or in its proper tempo, White cuts it from the show after giving it to Peggy–until the first act finale, when, due to disaster striking the turntable needed for the big planned wedding cake production number, Indy decides to break with Scandals tradition and just have Gershwin go on stage with a simple piano and have Peggy since his song simply and correctly, with no huge flourishes, knocking it out of the park, provoking a spontaneous standing ovation, and proving that a big Broadway finish doesn’t need huge, expensive spectacle. All you really need is a brilliant, powerful song married to a brilliant, powerful voice to knock ’em dead in the aisles.

Next week: the (I-can’t-quite-believe-it) final episode of The Adventures of Young Indiana Jones!

Previous: “Mystery of the Blues”