The Adventures of Young Indiana Jones 3.04: “Winds of Change”

Currently, I’ve been rewatching and blogging on The Adventures of Young Indiana Jones, continuing last week with the eighteenth chapter, “Treasure of the Peacock’s Eye”. Before proceeding with the next chapter, here are a few things you should know, if you haven’t read the earlier post: 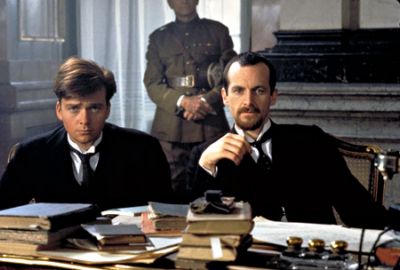 The first story of this set finds Indy in Paris, working at the peace conferences as a translator (another great use of his aptitude for languages), and while one may have some qualms about the fact that, at the end of the last episode, he was all ready to go home to Princeton and now he’s in France with this job, without any explanation as to how it happened, it works narratively because (a) as strong as his desire to go to the University of Chicago and become an archeologist may be, his fear of facing his dad about the issue and particularly of seeing him for the first time in three years since running away might be even stronger, or at least feel like it is in the moment, so taking this opportunity presented to him is completely understandable (and we knew he had to stop over in London before going back to America, so it’s likely that that’s where he found out about this gig) and (b) after Indy was present at so many key historical moments throughout the war, it feels right that he be there at the official close.

It’s also, of course, a good way to reemphasize the major theme of the war episodes, which is that, despite how noble the original intentions of a conflict, war is an ugly business in which poor people get caught in the crossfire of greedier, wealthier people profiting off of it. All the way back in Mexico, that old farmer had told Indy that war after war, the only thing that ever changes is who is in power. The people remain downtrodden. Indy references that scene again in this episode, in which he sees the leaders of the various nations succumb to their desire for petty revenge against Germany, without taking into consideration the repercussions of going back on their word regarding promises they’d made to the country. President Woodrow Wilson has some idealistic goals but he ends up conceding on each one. All France and England care about is humiliating the Germans, dragging down their country and restoring the world to exactly as it was before the Great War, and English historian/philosopher Alfred Toynbee says to Indy, “Those who forget the lessons of history are doomed to repeat it.” And, of course, the League of Nations’ actions here will sow the very seeds that will later grow into the next, even worse World War, not so very long after. People are so sure that another war will occur, in fact, that one little French boy on Indy’s train excitedly talks about fighting the Germans when he grows up.

And as the episode shows us, even the seeds of what will even later than that become the Vietnam War are sown here. Indy attempts to help a Vietnamese man petition the League to aid his country, but they ignore him, just as they also go back on their promise to give the Arab countries back to the Arabs–which infuriates but does not surprise T. E. Lawrence. For Indy, it’s yet another lesson in how corrupt the adult world is, as well as riddled with lies. Interestingly, however, despite all he has been through, he never relinquishes his optimism or overall innocence, and my theory is that the future course his life will take is in many ways his attempt to distance himself from the way the world too often is. He decides to engage in a life of adventure in exotic locales, pursuing what to him is a truly noble purpose–educating the world about the treasures of history, protecting priceless artifacts from baddies who would squander and use them for their own evil purposes. It’s also a simpler, black-and-white world where the morality is much more clear-cut good vs. evil without the troublesome moral complexities that the war forced him to face on a regular basis. And I think that’s exactly how Indy will come to prefer it.

That isn’t to say that the world won’t let him down in the future, that he won’t have upcoming losses and betrayals, but despite growing up and attaining some level of cynicism, he will manage to always, above all else, retain his boyish sense of wonder at the thrill of exploration and discovery, which is probably why film audiences became so enamored of him. Beneath a layer of stereotypical manliness, he has the beating heart of an adventurous kid. 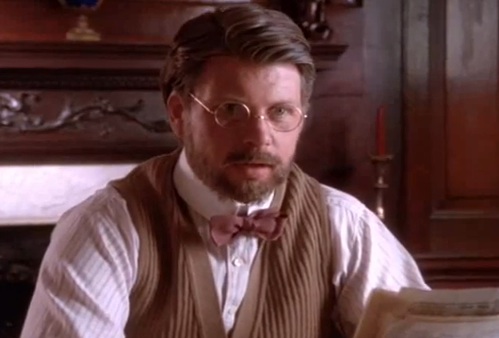 The next story in the set is an interesting one in that, rather than being plot-driven, it instead focuses on a number of relationships in Indy’s life–two of which are formed over the course of the 45 minutes–however all of these threads circle around the idea of a bustling world on the brink of change versus the old world, embodied by Indy’s father.

Indy’s reunion with Henry, Sr., has been a long time in the making. I was a bit worried we wouldn’t actually see the two of them together again, because, what with the non-chronological structure with which the story was originally presented and the fact that the show was prematurely canceled, I didn’t know if they’d ever gotten a chance to tell that story, and I’m so glad they did, as the narrative really required it in order to come full circle. Now, of course, I knew that the two couldn’t actually reconcile and that, in some ways, they might have to end up in a worse place by the end of it, given that by the time of Last Crusade, Father and Son have barely spoken, if at all, in nearly 20 years, but at least an attempt to reconnect is important, as in many ways, their relationship or lack thereof has been one of the most important threads, quietly running throughout the series. It is in large part what inspired Indy to run away in the first place.