The Adventures of Young Indiana Jones 3.03: “Treasure of the Peacock’s Eye”

Home » Rewatch » The Adventures of Young Indiana Jones 3.03: “Treasure of the Peacock’s Eye”

Currently, I’ve been rewatching and blogging on The Adventures of Young Indiana Jones, continuing last week with the seventeenth chapter, “Masks of Evil”. Before proceeding with the next chapter, here are a few things you should know, if you haven’t read the earlier post:

Original airdate: Unaired in the original run; later aired on the Family Channel 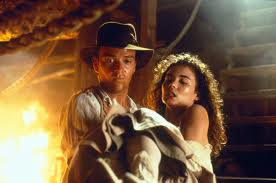 “Treasure of the Peacock’s Eye”

[Note: Although this episode was originally composed of two unaired episodes, “London/Egypt, November 1918” and “South Pacific, January 1919,” they are so closely related as to effectively be one story, and, in this case, I found it much easier to discuss it as a whole, rather than dividing it, particularly given that its composite parts never aired separately.]

While previous Young Indy episodes have featured elements that foreshadow the sorts of adventures Indy will later have in his films, “Treasure of the Peacock’s Eye” goes the furthest of any of them to date, being almost a full-on, classic Indiana Jones story in its own right, centered on Indy and Remy teaming up once more, this time trekking across multiple countries and following clues and codes secretly embedded in ancient maps and such in order to chase down a priceless artifact from Alexander the Great, which is also being hunted by a rival group of thugs, headed by an intimidating, EVIL German (naturally) with one eye and a perpetual sneer on his face.

This episode has everything: derring do; knock-down, drag out fights amidst fiery backdrops; a sexy woman performing a period musical number a la the opening of Temple of Doom; that woman later revealing herself to be a villain a la Last Crusade; another badass female adventurer reminiscent of Marian (though she doesn’t survive long); ancient tombs with secret doors hidden inside hieroglyphs and such; Indy repeatedly getting and losing the treasure he’s after to a variety of villains and/or other people out for it; and it even has a nifty, more culturally sensitive twist on the sort of native tribe that hunts Indy down after the classic opening sequence of Raiders. Here, a violent group of pirates is chased down and killed by a tribe. Indy and Remy, on the other hand, peacefully surrender and befriend the tribesmen, learning about their culture both through exposure to them, as well as from Bronislaw Malinowski, an anthropologist who spent years studying tribes such as these.

Actually, although I said, “Indy and Remy,” I should have just said “Indy,” because Remy spends the entire time complaining, worrying about the natives harming them, and growing increasingly combative. He isn’t as used to this sort of situation as Indy is, from his childhood adventures, not to mention his spy experiences. Furthermore, Remy is so singleminded when it comes to finding the treasure that anything that gets in his way angers him. Although Indy is mostly here to back up his friend and for the thrill of the adventure, all Remy cares about is tracking down the Peacock’s Eye and becoming filthy rich from it. And each time they seem to have the treasure only for it to slip away increases his resolve further and further, and so when they finally get the box and open it up, he is absolutely crushed when there’s nothing inside it but a stone. Whereas he throws a tantrum, Indy on the other hand, patiently brings it to Malinowski, who helps him translate it, discovering further clues for where the actual Peacock’s Eye must be.

In the process, Indy also realizes however that he isn’t interested in going on a worldwide goose chase for this item, mainly because he doesn’t care about striking it rich. Much like the rival archeologists in the Indiana Jones films, Remy isn’t interested in the history of the object nor in preserving it for future generations in a museum. His intentions aren’t pure. He just wants to sell it for an ungodly amount of cash. And that is why Indy ultimately decides to part ways with him and instead return home to America, to attend the University of Chicago. He wants to finally pursue his dream of being an archeologist.

Sure, he wants to go on adventures one day not too unlike this one with Remy, but he wants to do so in the pursuit of knowledge and for the betterment of mankind, and he wants to do it having been properly educated beforehand, following in the footsteps of mentors of his such as T. E. Lawrence and Howard Carter (the archeologist who discovered King Tut’s tomb and who headed the excavation Indy took part in as a young boy in Egypt), and even, despite himself, in those of his father. And it takes the guidance of Malinowski for him to realize just why his current path with Remy hadn’t felt quite right to him from the beginning.

I also have to mention two powerful moments from the start of the episode: the first being the end of World War I. When the episode first started and I saw a battlefield scene, I have to admit that I nearly rolled my eyes. I have gotten so tired of World War I episodes. Which is why it was such a wonderful relief when the scene actually turned out to be a depiction of the end of the war, from the soldiers’ perspective. Suddenly, the gunfire stops and the battlefield becomes shockingly quiet. And the disbelieving look on Indy and Remy’s faces at that silence speaks a thousand words. It’s a beautiful moment.

From the uplifting to the heartbreaking, I have to admit that when Indy returned to London to discover that Miss Seymour had passed away of fever only a week before, it truly tugged at my heart strings, and when he read her letter, in which she begged him to make his peace with his father, the tears began to flow. Miss Seymour was never an overly emotional woman, but you can hear in each line of dialogue just how dearly she loved Indy, and from his reactions reading it, just how much he loved her. If anyone had ever doubted that Indy’s world would never be the same after the war, Helen’s death seals it. Because he has no family left now but his dad, and he doesn’t really have him, either. He has no loving, safe place to return to now, nor the war asserting a sort of purpose on him. Now, he finally has to follow his own path, fully decided by him. And, again, after following Remy for a while, he realizes that it’s time for them to part ways and for him to finally become who he is supposed to be.

Next: “Winds of Change”