The Adventures of Young Indiana Jones 3.01: “Tales of Innocence”

Currently, I’ve been rewatching and blogging on The Adventures of Young Indiana Jones, continuing last week with the fifteenth chapter, “Daredevils of the Desert”. Before proceeding with the next chapter, here are a few things you should know, if you haven’t read the earlier post: 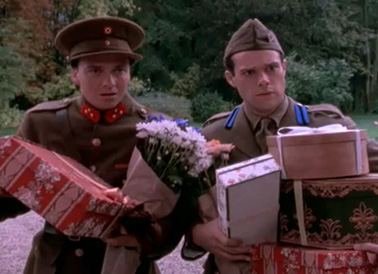 After I was a bit worried that I’d grown completely tired of World War I stories in the previous episode, I’m happy to report that it was, indeed, just the one episode, because I found myself absolutely loving this one. Granted, it didn’t focus on the war to the extent of the last one, which helped a great deal, but even before that became apparent, I was completely wrapped up in this one, which was light on its feet from the start, compared to the more sluggish, dour tone of the previous one.

It takes a while to realize what this episode is actually going to be about, but I love that it starts off by throwing the viewer off guard. The first time we see Indy, he is wearing an eyepatch, is missing an arm, and seems to be leading a German regiment. Which, of course, is a cover, but is unique to date in that we start off in media res, with Indy already embedded in his mission and, furthermore, being trusted with such an extremely dangerous and seemingly prominent espionage gig, which implies that the higher-ups have certainly begun to trust his skills by this point. The series furthermore reemphasizes a running theme of all of the soldiers–no matter what army or side they fight for–being fundamentally similar and human. None of the German soldiers we see here are cartoon villains. They are regular young men, fighting for their country, and eager to hear Indy’s stories about the girl that he’s fallen in love with.

The episode maintains that lighter tone in subsequent scenes in which we see Indy sing contemporary popular songs while bathing, and then use his skill for speaking multiple languages and in convincing dialects for the purpose of conning a rude, hickish American soldier into thinking he’s Belgian, to the amusement of another soldier, who just so happens to be a young Ernest Hemingway! Naturally, the two become fast friends, and their scenes together are full of wonderful Hemingway easter egg moments, including Indy getting roaringly drunk with him, telling him about his travels to Spain and the bullfighting that happens there (Spain would become a sort of second home to Hemingway, and he was furthermore fascinated by bullfighting), and at one point quoting a poem to him whose title Hemingway would later borrow for that of one of his most famous works, A Farewell to Arms! There’s also a great bit in which Hemingway helps Indy write a love poem to Guilietta, the young lady with whom he Indy is smitten, after insisting to Indy that he’s simply a reporter, not a writer–a subtle intimation being that Indy is one of the reasons that Hemingway becomes newly inspired to once again pursue writing for creative endeavors.

Now, this whole time, Indy has been wooing Guilietta whilst also growing bitterly jealous of another man who has also been giving her flowers and gifts, and Hemingway has been helping his new friend out in order to win her heart. Little do either of them know–since Indy never tells “Hem” her name–that they have both been chasing after the same girl this whole time, something which becomes immediately apparent to them when they both show up to her birthday party (a kitchen scene, spoken entirely in Italian, in which Guilietta’s father and mother curse each other for each having invited the other boy, while she cries and her grandmother admonishes her father for having married his foolish wife in the first place is a true highlight, being an over-the-top satire of Italian melodrama-verging-on-opera), which naturally sets off a war between them for her heart that grows increasingly comedic as it goes along, each one upping the ante further and further, sabotaging one another’s gifts and dates with her. The scene in which they have a musical duel of sorts, Hemingway on the cello and Indy on the sax, is a particular standout. While the identity of “the other one” might not be too surprising, it’s still very entertainingly played.