The Adventures of Young Indiana Jones 2.08: “Daredevils of the Desert”

Home » Rewatch » The Adventures of Young Indiana Jones 2.08: “Daredevils of the Desert”

Currently, I’ve been rewatching and blogging on The Adventures of Young Indiana Jones, continuing last week with the fourteenth chapter, “Espionage Escapades”. Before proceeding with the next chapter, here are a few things you should know, if you haven’t read the earlier post: 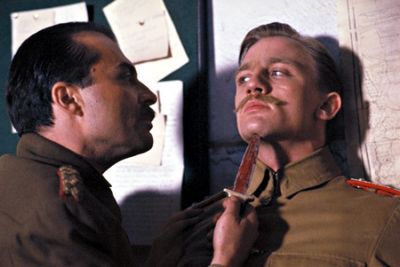 [Note: This is a unique episode of Young Indiana Jones up to this point, in that it is the first 90-minute-episode (well, actually, closer to 85 minutes) that isn’t compiled of two episodes but is instead an expanded version of a single episode that never made it to air but first saw the light of day in this format, on home video. Therefore, this will be the rare Young Indiana Jones post that won’t be divided into two sections, the only previous one being “Phantom Train of Doom,” which was different due to (a) having aired on the Family Channel and (b) being composed of two distinct unaired episodes, rather than a single expanded one.]

I really wanted to like this one. I really, really did, and yet, for some reason, it never quite connected for me. Maybe I wasn’t in the right mood. Maybe I’m just getting a bit tired of the war stories, and since this one featured more prominent battlefield-type scenes than any in quite a few now, I mentally tuned out. It probably also didn’t help that Indy didn’t show up for a while in this one, and I never found myself really engaging with any of the plans to fool the Germans from discovering the actual target.

It isn’t a bad episode. I don’t have a subsequent bullet-pointed list of dislikes, because there aren’t really any in particular. It mostly just has to do with slow pacing, not finding myself as interested in the events of this one as I was with others, and–as previously mentioned–growing a bit tired of World War I by this point. Given that there are still a few more episodes set during the war, I hope that this is just a one-episode blip and I haven’t fallen out of the mood all together. The previous two stories managed to be more removed from the more direct military aspects of the war, so I’m hoping that the same holds true for the next bunch.

Next: “Tales of Innocence”