Currently, I’ve been rewatching and blogging on The Adventures of Young Indiana Jones, continuing last week with the thirteenth chapter, “Adventures in the Secret Service”. Before proceeding with the next chapter, here are a few things you should know, if you haven’t read the earlier post: 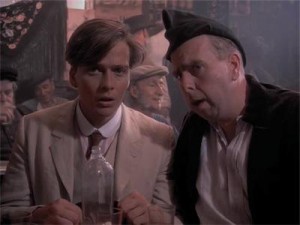 This is the most purely delightful episode of Young Indiana Jones in what seems like ages. Gone–at least for this installment–are any fears about genuine life-or-death danger, despite the fact that Indy is still doing the espionage thing. Instead, we have a wacky romp that includes a return visit from the bonkers Picasso, a bungling gang of international spies (including Timothy Spall and Monty Python‘s Terry Jones, who also directed the episode), and Indy going undercover as an extra in a performance of the infamous Ballets Russes! The comedic highlight of this first story involves Indy, while on stage, trying to send a message to his compatriots by shaking his crotch in Morse code–you see, he has a very reflective “jewel” directly in the center of it.

In short, the story centers on Indy and this bunch of completely batty spies working on a scheme to convince the Count of Toledo to remain neutral in the war and not side with Germany by making it seem that his wife is having an affair with a German colonel, Schmidt, who is actually sleeping with one of the ballet company’s head dancers, Nadia…but not really, because they are both actually American spies, and so Indy and the other guys have seriously bungled things up, when the Count of Toledo challenges Schmidt to a duel to the death.

There’s wacky comedy, last-minute scrambles, and a running gag with an ancient, mostly deaf costume attendant. As I said, it’s just fun and broadly played, and after some pretty heavy-going this season, it is a terrific relief and great example of how successfully diverse in tone the show could be. 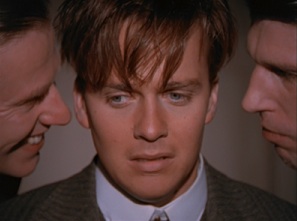 The second story is just as comedic as the first, albeit in a completely different way. Whereas the Barcelona half is a lighthearted trifle, the Prague one delves into dark, absurdist humor that is blisteringly brilliant while also being increasingly, deliberately uncomfortable at times. Featuring Indy meeting Franz Kafka, the entire story mirrors that author’s writing style.

It is what should be a simple story of Indy trying to get a phone installed. His current mission was to be stationed in a specific flat in order to receive an extremely important phone call, except when he arrives there, he discovers that the phone has been taken away. This sets him on a journey to the ridiculously named Ministry of Telephones. And while one might think this to be a relatively simple task, it proceeds with him being shunted from office to office, each one with a different form for him to fill out. The bureaucratic requirements for him to get this phone reach preposterously exaggerated levels. At one point, he’s even arrested and jailed, while never actually being told–no matter how many times he asks–what exactly he did wrong in the first place. He eventually gets out by telling one guard that he was incarcerated wrongfully, filling out another form, and snap! they free him, with no explanation as to why it was so easy after being so difficult for so long or why any of this has happened.

And that’s only about halfway through his travails, during which he is continually faced with rude bureaucrats practically speaking gibberish–I commented in an earlier episode that Indy’s initial spy training reached almost Carrollian levels of nonsense, but that was nothing compared to this–and each time relief seems in sight, it’s pulled away from him. The direction also features numerous surreal touches, such as forms that look standard-sized but which fold out into practically endless reams of paper that each bureaucrat is able to perfectly fold up to their original sizes with a simple flick of the wrist thanks to trick photography, and at one point, a chest that manages to slide down multiple flights of stairs by seeming to effortlessly glide across the floor of each landing before turning onto the next set of stairs.

It’s a dark satire on bureaucracy brought to nightmarishly comedic levels, featuring poor Indy being driven further and further past the point of insanity due to an insane system. His utter meltdown is probably my favorite moment of acting Sean Patrick Flanery has had on the series, particularly when he responds to Kafka by saying, “No, I’m not upset. I’m INCANDESCENT WITH RAGE.”

It’s a true shame that this stylized slice of absurdist hell never made it to air. It feels strange and perhaps even unfair on some level to say that it’s my favorite Young Indiana Jones story yet, because it transcends the general confines of the show so much in so many ways that it practically feels like a different show all together, but it is an absolutely masterful piece of filmmaking that I’d put up there with Terry Gilliam’s Brazil as among the best sheer dystopic, bureaucratic, darkly comedic nightmares I’ve seen on screen.

Previous: “Adventures in the Secret Service”

Next: “Daredevils of the Desert”