The Adventures of Young Indiana Jones 2.05: “Attack of the Hawkmen”

Home » Rewatch » The Adventures of Young Indiana Jones 2.05: “Attack of the Hawkmen”

Currently, I’ve been rewatching and blogging on The Adventures of Young Indiana Jones, continuing last week with the eleventh chapter, “Oganga, the Giver and Taker of Life”. Before proceeding with the next chapter, here are a few things you should know, if you haven’t read the earlier post: 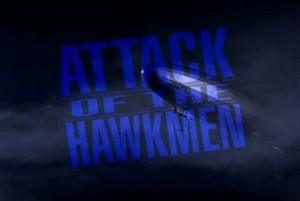 After the overall extremely dark run of World War I episodes up to this point (other than the temporary reprieve of “Phantom Train of Doom”), the show once again starts to find the light again in “Attack of the Hawkmen,” which pleasingly occurs as a direct outgrowth of Indy’s recent experiences. Their time with Albert Schweitzer deeply affected both Remy and him. After experiencing that great man’s selflessness and humane philosophy, they no longer want to continue killing people on the front but instead want to now save lives by helping contribute more directly to the end of the war, and so they decide to join the French Secret Service, where they are trained in espionage and code-breaking. Amusingly, Indy first gets them in by forging documents, and the man who calls them into the office immediately realizes it, but instead of punishing them, sees it as evidence of their talent and ambition.

Also amusingly, the rotund Remy is instantly placed in a spying position, whereas they don’t immediately know what to do with Indy and so send him to the Lafayette Escadrille (a famous flying unit of Americans who volunteered to fight for the French army, before the US joined the war) for two weeks to be a photographer–a notoriously deadly job, since he’s essentially being sent into battle weaponless. Before getting on to that, however, I’d just like to touch on Remy and Indy’s farewell to each other, which, as far as they know, could be their last scene together.

I haven’t discussed Remy much in these posts, but he has been a fantastic foil for Indy throughout this entire time, so great because he’s so not the sort of sidekick one ever would have expected for our young hero: older, Belgian, obese, and yet the two are a great odd couple, often sniping at each other a bit but also as close as brothers. And while neither of the two are particularly sentimental–they don’t embrace or gush here–you can feel a real sense of loss and worry on both of their parts. They’ve been separated before in the heat of battle but this is the first time they are truly, consciously parting from one another since they met and joined the war together, making at least Indy feel initially more intensely alone than he has before.

This isn’t helped by him reaching his post and discovering that he won’t be simply analyzing photos, as he had expected, but–as previously mentioned–going up in fighter planes (which he hates, as we know from the films…and certainly more so after this experience, which likely increases his dislike of them later) and taking photos, while enemy fire is shooting at him, a position that has killed most previous people in 8 days or less. As it so happens, this turns out to be only the first of many times he will be thrown into a situation that wasn’t fully explained to him over the course of this episode.

And as it proceeds, it proves to be one of the most thrilling so far. Shortly after taking to the sky, we are treated to one of the best action sequences in the series up to this point, with Indy dangling from the side of the plane’s wing and having to hang on for dear life, while the plane does upside down loops, Germans shooting at them all the while. The sequence is extremely tense, and looks shockingly real and high-budget, especially compared to some of the obviously green-screened stunt work in some earlier episodes, such as when Henry Sr. and Indy were stuck in the box going down the mountain. What makes it particularly frightening is how fragile and awkward these WWI planes look to us now, especially when they land, seeming as if they can’t quite keep their balance. It puts in perspective just how relatively new the technology was when it was being used in war, which is both scary and incredible.