The Adventures of Young Indiana Jones 2.04: “Oganga, the Giver and Taker of Life”

Home » Rewatch » The Adventures of Young Indiana Jones 2.04: “Oganga, the Giver and Taker of Life”

Currently, I’ve been rewatching and blogging on The Adventures of Young Indiana Jones, continuing last week with the tenth chapter, “Phantom Train of Doom”. Before proceeding with the next chapter, here are a few things you should know, if you haven’t read the earlier post: 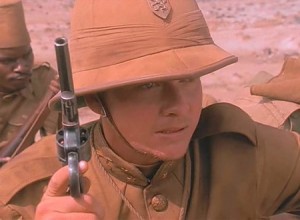 “Oganga, the Giver and Taker of Life” is another episode whose two halves aren’t just paired due to chronological proximity or thematic similarities but rather actually do tell a complete story from start to finish. In some ways, this might actually be the most cohesive episode yet. Even the previous “Phantom Train of Doom,” which originally aired as a 90-minute TV movie, has less of a natural build from sequence to sequence as this one does, adding up to one of the most emotionally brutal yet heartbreakingly beautiful episodes of the series up to this point.

The main thrust of the episode revolves around Indy, shortly after getting a military promotion, helping to lead an expedition of African men across the Congo in order to reach a weapons cache that they are then meant to bring back to a certain battlefield. Over the course of this first half, this arduous journey takes a deadly toll. Out of a fairly large battalion, only 5 ultimately survive, due to the pernicious spread of disease combined with enemy fire. By about 45 minutes in, even Indy is all but completely emotionally broken, at his lowest point, and delirious with illness, a sad and very troubling thing to watch.

The episode isn’t devoid of hope, however. In fact, it is ultimately an extremely humane story that shows how, even in the bleakest of circumstances, one can find or create light in the darkness. That sense of hope appears first in the form of a little African boy, although our first image of him is contrasted by an entire village of dead people surrounding the child. Indy’s troop stumbles upon this settlement full of corpses, all of whom but this little boy had fallen victim to a disease, possibly smallpox. Indy’s superior officer, a stern, humorless man who considers him an impetuous, foolhardy upstart, orders the men to leave the boy there, as the child might be a carrier of disease. And despite his conscience rebelling against the notion, Indy swallows his objections and transmits the orders to the rest of the men.

One of them, a sergeant called Barthélèmy, however, ignores this command and smuggles the child along with them, which Remy discovers and of which he informs Indy. And it is through his subsequent interactions with Barthélèmy and this child that Indy comes to learn all over again that he is not fighting the war he thought he was. While he had grown disillusioned with the war in regards to the European fighting, Indy still seemed to think that in regards to Africa, he was helping to free these downtrodden people from German rule and allow them to run their own country. Barthélèmy tells him, though, that the Belgians and French don’t care about the African people at all. The only reason they are fighting the Germans is in order to take control of the country themselves. He even tells Indy that he and all of the other Africans in this troop are only there because they were either conscripted or threatened into doing so. And the proof lies in the major’s order regarding the little boy. Would he have ever ordered his men to leave behind a white child to die alone, surrounded by his deceased loved ones?

At this point, however, Indy is still trying to follow orders. While he was able to secretly blow up his motorbike to destroy the other general’s orders in the previous episode, disobeying this man would require full mutiny, which he isn’t prepared to do. And so he does report that the boy is with them, although he doesn’t implicate Barthélèmy, instead saying that the child had simply followed them and that, given that he still seems alive and well, he isn’t likely to have the disease. The major grows more and more irrational, however, and when Barthélèmy later outwardly defies his next order, to tie the boy to a tree, he points a gun to Barthélèmy’s head, which inspires all of the other African men to refuse to go without the boy. Soon, the man–who seems himself to be ironically growing delirious with the illness he was worried that the boy had–is threatening to kill all of them, which finally leads Indy to take his stand, turning his gun on the major, as well, and refusing to allow him to hurt any of the men, let alone this little boy. In that moment, he sees the major’s madness, as well as the truth that the Belgians don’t care about the Africans for whom they are ostensibly meant to be fighting, drawn into sharp relief.