The Adventures of Young Indiana Jones 2.03: “Phantom Train of Doom”

Currently, I’ve been rewatching and blogging on The Adventures of Young Indiana Jones, continuing last week with the ninth chapter, “Demons of Deception”. Before proceeding with the next chapter, here are a few things you should know, if you haven’t read the earlier post: 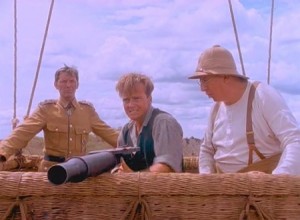 Unlike all preceding installments of The Adventures of Young Indiana Jones, this 90-minute episode is, for all intents and purposes, identical to the version that originally aired as part of The Young Indiana Jones Chronicles. In every other case, each 45-minute half has been its own distinct story, whereas “Phantom Train of Doom” is basically a single piece. It goes through different focuses and movements over the course of its run, but in many ways, it’s the closest any Young Indiana Jones story has come to being a full-on spiritual predecessor to the Indiana Jones films, from start to finish.

To wit, this African-set episode is loaded from top to bottom with increasingly imaginative action sequences that include suspense and comedy in equal measure, and in which Indy and the other good guys get the upper hand, then lose it, then gain it again, then lose it, and so on and so forth within moments of each other, due to a mixture of luck, quick thinking, and twists of fate. Still being a virtual kid at this point, Indy isn’t yet as suave or competent at this whole adventure thing as he will be, but he’s getting there. The situations range from the ridiculous to the sublime and back again, and most importantly, involve fighting German baddies. There are punches thrown and explosions and fights on moving trains and crazy stunts. In short: Indiana Jones.

While it would be difficult to remember all of the many wonderfully bonkers things that happen in this episode, they include:

After a number of episodes that focus on the grim realities of the World War I battlefield, this one is an immense relief and feels truly earned. As viewers, we need some comic relief at this point and while it may ultimately amount to a string of silly capers, it is an immensely fun 90 minutes of television, with expertly conceived and directed action sequences that can easily take their place among the best of the Indiana Jones films. While I understand why every episode couldn’t be like this–and I actually admire the show for that, for not simply trying to do a mini-Indiana Jones film each week, which might have been entertaining but would likely have lacked the genuine depth the series demonstrated on a regular basis–it’s appreciated, particularly at this particularly dark juncture in the storytelling. In its original run, however, this was one of the last stories to air, and I kind of wonder whether they might have been wiser to have done it earlier, as it really does feel like a nice intermission from the bleakness of the immediately preceding episodes that, at the same time, never makes light of the war or the situation.

As with a number of the previous “older” Young Indy adventures, this one also nicely links to his earlier adventures, in that one of the old men is Selous, one of the master hunters who Indy met as a young boy when he was on the expedition with Teddy Roosevelt. And although at first, Indy scoffs at the idea of men their age being able to fight and have any sort of impact, over the course of their adventures, he comes to learn that they are just as tough and competent as ever–that this old guy is still just as strong a marksman as he was when Indy was a boy–a lesson that he will surely take to heart himself in the future. One can’t imagine that Indy would ever settle down himself. One can picture him still chasing down historical treasures when he’s old and gray.

Indy even learns from his elders in the form of Paul Von Lettow-Vorbeck, the German colonel who he captures and who treats him like a child throughout that entire misadventure, criticizing his technique and showing him up throughout, repeatedly, even though Indy, as his captor, should theoretically have the upper-hand. Indy comments that he might as well be holding his dad as a prisoner, and it’s funny how accurate this is. Von Lettow-Vorbeck is like a comedically exaggerated Henry, Sr., constantly giving Indy unwanted advice and being condescending to him. Although he remains off-screen, Henry Sr.’s shadow continues to loom large over his son’s life.

Interestingly, however, the colonel and he start to strike up a strange sort of…not quite friendship, but at least mutual respect for one another, and in the end, Indy frees him, in exchange for Von Lettow-Vorbeck letting him leave with his life. The older man even gives Indy his compass, so he can find his way back–a nice little acknowledgment that, despite their vastly different backgrounds and technically being enemies, the two are both people who have been through a great deal of mayhem together in a short amount of time. Indy seems to remind the man of the son he might have had, just as he reminds Indy of his dad, and for a few brief moments, there’s something rather sweet about this brief shared moment of understanding, regardless of what side each fights on.

There is also a great, kickass female character in the form of another historical figure, Margaret Trappe, known for being a fantastic hunter and pilot, who, despite being temporarily captured by the group of old men, never loses her defiance for a moment, and in the end, is the one to nearly bring down Indy and Remy. Although women aren’t always as prominent on Young Indiana Jones as they could have been, the series has a history of showcasing strong female characters, particularly some historical ones who otherwise are not well-remembered today, and this is a great example of that.

Next: “Oganga, the Giver and Taker of Life”