Visually magnificent and emotionally stunning, The Fall is a cinematic opus not only difficult to categorize but even to summarize.  A simple synopsis fails to do justice to the sprawling, staggering genius of this deceptively straightforward, lushly imagined work.

The brainchild of writer-director Tarsem, The Fall features Pushing Daisies‘ Lee Pace as Roy, a suicidal Hollywood stuntman in the days of silent cinema, paralyzed below the waist (perhaps temporarily, perhaps permanently) after a disastrous fall, who forms a unique friendship with a young immigrant girl, Alexandria, convalescing in the same hospital after breaking her arm in a similar fashion, falling from a tree while picking fruit. Over the course of the film, he makes up a complex, fantastical story for her, about a band of roving buccaneers, including an unnamed Bandit, an unnamed Indian, an unnamed Mystic, a slave named Otta Benga, a portly explosives specialist named Luigi, and Charles Darwin (yes, that Charles Darwin), traveling across the world to vanquish the evil Governor Odious. The film continuously cuts from the Los Angeles-based hospital to the resplendent fantasy world of Roy and Alexandria’s imagination in a manner reminiscent of The Princess Bride and The Adventures of Baron Munchausen, both of which, like The Fall, are films about storytelling. 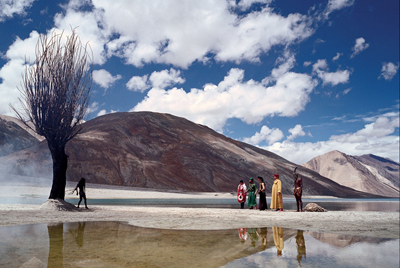 The Fantasy World of "The Fall"

Upon hearing of the film and its plot, I had a number of assumptions. One was that it would be an aesthetically beautiful but mostly lighthearted romp full of flights of fancy and wonder. Another was that it would be a rather sentimental piece about how the power of storytelling and the friendship of a little girl help inspire a depressed, lonely man into reaffirming his love of life. I was prepared for the calculated upliftingness of a Hollywood film. The Fall, however, is something very different. Yes, its fantasy sequences are, in many ways, a broad and funny satire of old adventure serials (Zorro, in particular) and fairy tales, with all of the quasi-operatic emotions that they entail, but more interesting is how the occurrences in the “real world” of the film interact with Roy’s story, and how Roy and Alexandria’s perceptions clash. And, yes, Roy and Alexandria are most likely forever changed by their relationship, but at the same time, their friendship is depicted without a hint of sentimentality or saccharinity. On one level, Roy does genuinely like the little girl and does seem to initially tell the story for the purpose of delighting her, but he has an ulterior motive, as well–not one at all of a sexual nature but one that does nonetheless constitute a betrayal of Alexandria. In short, he dangles the story before her like Scheherazade, exchanging new chapters in the story for her cooperation in procuring morphine for him. He wants to kill himself and is manipulating this little girl to unknowingly provide him with the tools.

This dark undercurrent acts as a masterful and deliberately jarring counterpoint to the swashbuckling tale he invents for the girl. Lee Pace again proves what a brilliant actor he is, and one who should have far more work than he does. There isn’t a trace of Ned the Piemaker from Pushing Daisies here. Instead, Pace fully embodies the role of a man at the end of his rope who has a cruel streak and can be a bastard but who also has a kind, creative soul buried underneath his anger and pain–a kind, creative soul which the little girl is drawn to and entranced by, and which the little girl also brings out in him. There is a warmth and tenderness to his relationship with Alexandria (Cantinca Untaru), that is moving and searingly honest, even as he fights with his demons in front of her. Meanwhile, Untaru is a remarkable young actress whose performance is never anything short of completely authentic. Tarsem accomplished this by hiring this young Rumanian girl, who didn’t speak a word of English, so that as the film progresses, her English improves and her relationship with Roy develops naturally. 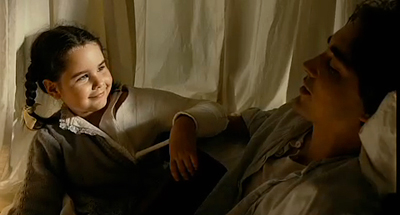 Roy and the girl

Indeed, The Fall is among only a handful of films that really seem to grok the mind of a child. Significantly, the other two that come to mind–Where the Wild Things Are and Pan’s Labyrinth–are also rather dark fantasies that accurately depict the day-to-day life of a young person, internally and externally. It isn’t as bleak as the latter, but it taps into a similar sense of darkness and danger, of a little girl on a personal quest. Alexandria is an inquisitive, young girl, bored by her long stay in the hospital as her arm recovers, who spends the day exploring the building and its environs, always carrying a small box of her most cherished possessions, which never leaves her side. As in Where the Wild Things Are, we as audience members only know as much as Alexandria picks up on here and there from listening in on conversations, so we are never given a full picture of Roy outside of the hospital. We know he hurt himself doing a dangerous stunt, and that his girlfriend has dumped him, leaving him broken and suicidal, but details such as whether she left him after he hurt himself or if he perhaps had been deliberately trying to kill himself on set because she left him, are left ambiguous.

As mentioned before, what makes Roy’s story of the Bandit particularly fascinating is how it is shaped by outside events, as well as by Roy and Alexandria themselves, and also how Alexandria translates Roy’s words through her own glossary. The best example is perhaps the character of the Indian. Roy describes him using stereotypical traits of a Native American, particularly as depicted in the Hollywood films in which he works, so he uses words like “wigwam” and “squaw.” Alexandria, on the other hand, has never seen a film before and knows nothing of cowboys and Indians. What she imagines is a person from the country, India, like a friend she once had, dressed in appropriate Indian garb. Like The Wizard of Oz (which Tarsem had, remarkably, never seen when he made the film), Alexandria assigns each character in the story with the face, as well as the traits, of someone she knows from the hospital, and these traits sometimes change. At the start of the story, she envisions the hero as being played by her deceased father, but as it progresses, she recasts the role in her head with Roy, indicating how he is becoming a father figure to her. (For another indication of Pace’s brilliant acting, as the Bandit, he yet again manages to embody a completely different person and in the same film.) There are also, of course, other factors which affect the outcome of the story–Roy’s mood at any given time being a major one, as well as Alexandria’s shifting desires at various points. The Fall asks a number of compelling questions as to who has the power in a story–the teller/author or the listener/audience, and what obligation the former has to the latter, in spinning his or her tale. 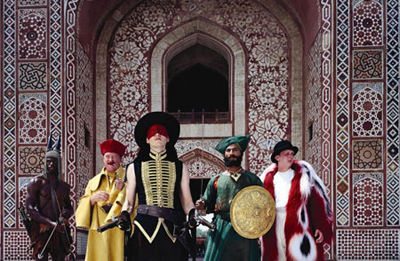 The characters in Roy and Alexandria's story

And what a gorgeous tale it is! The fantasy portions of the film are filmed in an endlessly inventive, visually extravagant style that is nothing short of breathtaking. Using no CGI and filming in locations in 24 different countries, Tarsem was able to create some of the most awe-inspiring effects I have ever seen on film, each frame riotous with thousands of verdant, oversaturated colors (not unlike Pushing Daisies) that are a sight to behold. The lavish costumes, sumptuous vistas and abundant spectacle that draw inspiration from classic, epic films, Bollywood, and more make The Fall a unique beauty both inside and out.

It is rare to find a film that looks this magnificent that is also so magnificently complex, both from a plot-based and character perspective.  It is difficult to define, resists any easy interpretation of its themes or motives, and has an open ending, but also remains approachable from start to finish, thanks to its achingly human characters, its dazzling (at times, dark) sense of humor, and the marvelous universe it creates. The Fall is rich in more ways than one.