After two years rotting in a cell in Faerie due to supposed treason, the former captain of the guard of the Seelie Army, Mauritaine, receives an offer from the Seelie Queen, Titania, that he can either remain imprisoned for life or embark on a dangerous mission for her and, in exchange, earn his freedom and that of four other inmates he is allowed to take with him. He chooses Raieve, a gorgeous half-Fae warrior woman from Avalon with whom he has reluctantly fallen in love, Lord Silverdun, a formerly powerful nobleman who may not be fully trustworthy, Honeywell, a faithful soldier who served under him, and Brian Satterly, a human scientist who became trapped in Faerie years before while trying to rescue his niece, who had been abducted and replaced with a Fetch. Along the way, he also takes Gray Mave, a prison guard at the end of his rope. 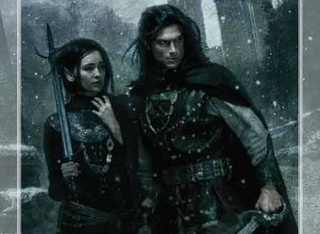 The main plot of comics writer, Matthew Sturges’, first novel, Midwinter, is in some ways reminiscent of a standard quest novel, with its protagonist, Mauritaine, leading a group of fellow travelers through the Contested Lands, the dangerous boundary between Regina Titania’s country and that of the malevolent Queen Mab (a delightfully, viciously scenery-chewing villain), and at the same time, is very different. One way it distinguishes itself is in the goal of the quest, which remains obscured for the majority of the novel. Mauritaine doesn’t know what he is meant to find and bring to his Queen, nor why she has sent him to procure it. All he knows is that he is loyal to Her Majesty and that he has made a promise that he is honor bound to fulfill. The other people in his gang similarly follow along because they have pledged to do so, despite not understanding the full picture. The desires of the Queen are not to be questioned but simply to be carried out. Sturges, in fact, allows us to meet Mab numerous times throughout the novel but withholds Titania from us until almost the very end, so it is nearly impossible to tell throughout whether Mauritaine is fighting for a just cause or not.

Fittingly for a novel set in Faerie, Midwinter unfolds like a dream, set in the year of winter that occurs only once every 100 years in Titania’s otherwise summer kingdom. At first, the characters, situations, and even the setting are a bit hazy (and deliberately so, I think), which made it a little difficult to embrace at the outset. Some of the stylistic choices may seem a bit odd at first, for example Sturges’ decision to sometimes include breaks in the middle of a chapter when the scene or character viewpoint changes, but sometimes to not do so. Frequently, a scene or point-of-view will shift, or a time lapse will occur without any warning, and though I originally thought these instances might be typos, I came to realize that it is all part of the constantly shifting, dreamlike atmosphere Sturges is creating. And as the story proceeded, I found myself increasingly bewitched by its potent spell. I started to fall for the characters, who may seem distant at first but who eventually reveal themselves to only have seemed so due to their years of imprisonment and the betrayal they suffered at the hands of those who imprisoned them. As the story opens up, so do they. The interactions between the Fae characters and the human, Satterly, make for some of the novel’s most clever and fascinating conversations and juxtapositions.

The novel also contains moments of dazzling enchantment the likes of which I have not encountered in a long time. Sturges’ vision of Faerie is sublime, with rapturous uses of magic, such as Mab’s floating city, and breathtaking asides, such as a brief sojourn with a group of traveling mestina–similar to a troupe of actors in a caravan, but instead spinners of glamours and illusion. Equally absorbing is the backstory and history he has crafted regarding the cold war between the Seelie and the Unseelie, which unexpectedly invokes Judaeo-Christian overtones in the form of a creative force referred to as Aba (Hebrew for “father”) whose existence is the cause of both great debate and slaughter. Midwinter is the sort of complex tale in which many characters’ alliances are not fully clear, and in which the higher-ups in the nobility have agendas within agendas within agendas, while those caught betwixt and between their machinations don’t know if the ground they are standing on is solid or only enchanted to seem so. Not all dangling threads are tied up for the reader.  Some connections one has to make oneself.

The novel closes on a series of revelations that are as stunning as they are ingenious.  Midwinter accomplishes the formidable feat of seeming, at the same time, both as elusive as a dream and as solid as a stone, and it casts a spell that is sure to long outlast its relatively brief page span.  I cannot recommend it highly enough. 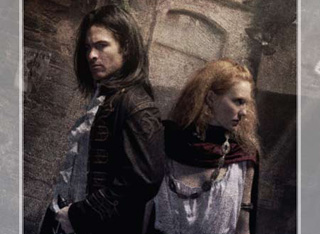 The Office of Shadow Cover

Its sequel, The Office of Shadow is even better–darker, richer, and even funnier. Whereas Midwinter is a twist on the quest novel, The Office of Shadow is the fantasy equivalent of cold-war-set spy-fi, detailing espionage occurring in Titania’s Seelie kingdom as a means of protecting her people and lands from the wrath of the Unseelie Queen, Mab, and her weapon of mass destruction, the Einswrath. Silverdun, the sidekick to Midwinter‘s protagonist, Mauritaine, becomes the hero of this novel, finding himself enlisted into the ranks of the Shadows, an extremely Black Ops division of Her Majesty’s spy network whose existence is all but completely publicly disavowed by the monarchy and the government, his main mission being to undermine Mab and her goals of world domination.

Through The Office of Shadow‘s fantasy construct, Sturges manages to examine a number of issues that affect our world, including nuclear weapons, the concept of mutually assured destruction, terrorism, and a needless war inspired by greed, not to mention a number of philosophical questions about such things as what defines a person. What is most impressive about it, however, is how he manages to never allow the parallels to seem heavy-handed or overwrought, through a combination of dazzling invention and meticulous, layered character development that keeps these fascinating people–or Fae, rather–from ever feeling flat or merely symbolic. His Faerie–each different place and culture within it–is such a fully realized, magical dimension that it consistently transcends being a simple parallel for our world. It comments on our world–on our wars, on our religion, on our mythology–but it is very much its own place.

Even as this novel places Silverdun and his fellow Shadows in a much grimmer position than in Midwinter, Sturges weaves even more humor through the piece than the previous novel, particularly through his delightful (and delightfully warped) message sprites. Overall, the humor most often tends towards that of the black variety, yet it manages to lighten what otherwise might have been an even darker work. He also adds even further complexity to the series mythology, building upon the revelations and character threads of the first novel to make for an even more rewarding second installment, with some genuinely shocking twists and turns, Chthonic gods, shadows of the past, and unexpected resurrections. And after the open-ended events of the tumultuous finale, which uncovers a new potential threat to the entirety of Faerie, I’m extremely eager for a third entry to the series.  Here’s hoping that will be sooner rather than later.

Purchase The Office of Shadow