Tales of One City: Pandemonium’s “Stories of the Smoke”

Home » Books » Tales of One City: Pandemonium’s “Stories of the Smoke”

In honor of Charles Dickens’ 200th birthday, the fantastic Pandemonium Fiction (from the people who brought you Pornokitsch) recently released one of the most innovative and original tributes to the man that I’ve seen, an anthology entitled Stories of the Smoke: Tales of Dickens’ London. Rather than being yet another biography or analysis of his work, Smoke seeks to explore Dickens by way of an assortment of sci-fi and fantasy stories (many of which are by some of today’s hottest, freshest sci-fi/fantasy writers) that delve into London, as it was seen through his eyes. Some of the entries retell classic stories of his or interpret his characters from new perspectives, while others conjure up the aura of his London directly or thematically.

More often than not, steampunk tends to focus on the shiny, technological dreams of the Victorian Era. By contrast, Smoke, like Dickens, shines a light on its dark underbelly on the one hand–the poverty, the corruption, the social injustice, the degradation–while still managing to capture the awe the man held for the city, as well: a true, passionate romance built of equal parts love and hate.

Charles Dickens lived and breathed London in a way few authors ever have, before or since. In his fiction, his non-fiction, and even his own life, Dickens cast an extraordinary shadow over the city he so loved – so much so, indeed, that his name has become synonymous with a certain image of London. A London of terrible social inequality and matchless belief in the human potential; a London filled with the comic and the repulsive, the industrious and the feckless, the faithful and the faithless, the selfish and the selfless…This London is at once an historical artifact and a living, breathing creature: the steaming, heaving, weeping, stinking, everlasting Smoke.

Over the course of its nineteen works–including an excellent, mood-setting introduction by Christopher Fowler and a piece on London written by Dickens himself from own anthology, The Uncommercial Traveller—Smoke takes us on a tour of London-As-It-Was, London-As-It-Is, London-As-It-Never-Quite-Was, and everything in between. With beautiful, surreal illustrations by Gary Northfield and stories that range from out-and-out sci-fi and fantasy to magical realist pieces with just a touch of the supernatural, the cumulative effect of the book as a whole is to not necessarily depict the “real” London but the London that lived in the mind of Charles Dickens, as well as through the minds of countless others who inhabited it and continue to inhabit it–its thesis seeming to be that a city isn’t just the sum of its physical parts nor is it truly composed of the buildings a tourist might sight-see but rather the feelings, hopes, dreams, grievances, heartbreaks, frustrations which the city evokes in the people who know it best. Whether or not it can be literally seen or touched, that London is the real London, after all. 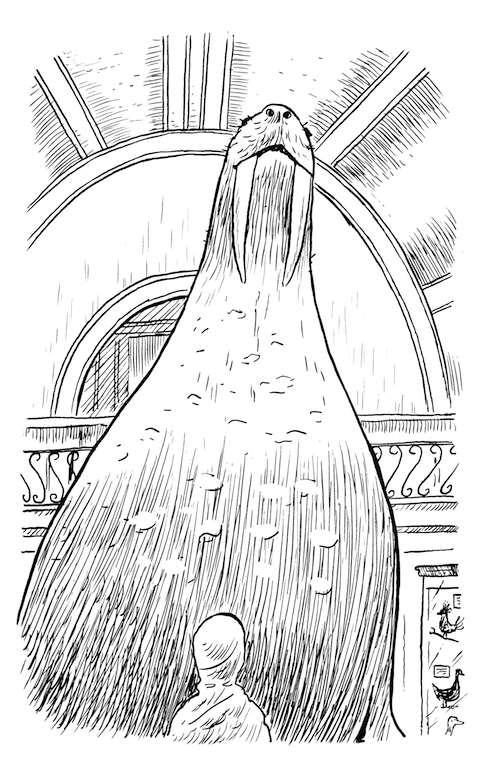 "The Collection" Illustration by Gary Northfield

In a manner of speaking, Smoke takes us on a tour of various Londons, as each story is set in its own fictional universe (while simultaneously occupying Dickens’ creative space, in some way). At the same time, what might be the anthology’s most impressive achievement is how editors Anne C. Perry and Jared Shurin have selected and assembled these diverse stories in such a way that a central, overarching thematic meta-story does manage to emerge. Like London itself, to each person who encounters it, it is a slightly different place and the same place, at once. Each author here–whether their story is literally set in the smoggy, gas-lit streets of Dickens’ London, the modern-day, or a fantasy version that blends aspects of each–reveals what London means to them as well as what it meant to Dickens. In other words, while they speak to his experiences, there is an immediacy, legitimacy, and personal touch to each story that refutes the concept that this is ever mere pastiche. Instead, the various writers are using the book’s main prompt as a jumping-off point in order to grapple with the London that they know, much as Dickens himself did, examining the city’s past and connecting it to its present.

For fear of giving away some very clever and unexpected plot twists, I hesitate to say too much about the specifics of the various stories. Particular standouts, however, include Sarah Lotz’s “Inspector Bucket Investigates,” a noir-infused detective puzzle that recreates Dickensian London under a surprisingly science-fiction framework and manages to be as suspenseful as it is often bitingly satirical; Archie Black’s “Uncle Smoke: A Brief Guide to the City of London, including Her History and Environs With a few Discursive Elements To better aid the traveler,” a sort of historical/mythological travel guide to London past and present, as presented by a narrator who certainly knows what he’s talking about; Esther Saxey’s “The Collection,” in which strange occurrences may or may not be happening at at National History Gallery exhibit; David Thomas Moore’s “An Unburdening of the Soul,” a tale of Spiritualism being used as a method to push for social change; Jonathan Green’s “Necropolis,” in which a man named Marley is haunted by the ghost of a man he accidentally (?) murdered; Kaaron Warren’s “The Pickwick Syndrome,” a dreampunk story in which the true purpose of pigeons is revealed; Michelle Goldsmith’s “The Hound of Henry Hortinger,” about a Scroogely man being stalked by a Baskervillian demon dog made of his own cruelty; and Lavie Tidhar’s “A Brief History of the Great Pubs of London,” which is as it sounds, or so it initially seems.

Stories of the Smoke truly is a literary feast–a fantastic sampler of cutting-edge storytelling, yes, but also a solid work that is both a unified vision of London and a swirling, kaleidoscopic voyage through and across a multiverse of Londons. Fans of Dickens, science-fiction and fantasy, London and/or all of the above might be the target audience, but even people who only fit into one or none of these categories might find themselves equally impressed by the scope and breadth of what brilliant modern-day fantasy such as this can say not only about one specific city or time in the past or present but about us, today and tomorrow.

Purchase Stories of the Smoke (US/Int’l)

Purchase Stories of the Smoke (UK)