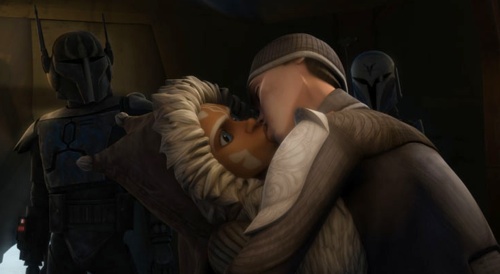 Ahsoka and her “betrothed” kiss.

One thing that never ceases to impress me about Clone Wars is how much plot and character development they manage to pack into each 22-minute episode. The epic three-part slavery arc is immediately followed by a standalone, but one that is written and directed so tightly that it seems to have nearly as many twists and reversals and as much character development as the episodes that came right before it, and without ever feeling rushed or underdeveloped.

It feels fitting, then, that this episodes picks up on a story thread that itself was presented for only a handful of minutes in an earlier episode but which managed to be so resonant that it seemed to have gone on longer than it did, and that is namely Ahsoka’s friendship with Lux Bonteri, the daughter of Padme’s Separatist friend who was soon thereafter killed by Dooku. It stood out so vividly both because it was the first time that Ahsoka was confronted with the idea that Sith or Dark Side users might not be the only ones who don’t like the Jedi–that, in fact, a completely reasonable person could have reasons to take issue with them, as well as the first time that Ahsoka interacted with a boy her age for whom she could develop romantic feelings.

In this episode, the two are thrown together again when Lux derails the first-ever officially sanctioned talks between the Republic and the Separatists by standing up to speak and accusing Dooku of his mother’s murder. After Ahsoka saves his life and they flee, however, he double-crosses her and takes her to a planet where he is meeting people who have promised to help him avenge his mother. Unfortunately, these people are actually Death Watch, the Mandalorian terrorist organization, whose wicked deeds he isn’t fully aware of. Lux is such an understandable, likable character, however, that although we know he is being incredibly stupid, it’s easy to forgive his actions in a way that one would have trouble doing for Boba Fett, who similarly got in over his head while trying to avenge a parent, and that’s because a) Lux’s mom was someone we liked and respected and b) not only do we know Ahsoka likes Lux and he likes Ahsoka and that he is sorry for having dragged her into the situation, but once he realizes his mistake, that Death Watch had simply used him (not unlike either the aforementioned Boba, or the Zygerrian Queen learning the truth about Dooku in the previous episode), he takes action against them. He learns of their actual nature in yet another shockingly uncompromising scene, in which the Mandalorian terrorists agree to return the women they have stolen from a nearby tribe only to stab one of the girls in the back right in front of her horrified grandfather.

I also love that, even after all they’ve been through, Lux remains true to himself. Just because Dooku proved himself to be evil doesn’t mean that Lux magically comes to embrace the Republic’s ideals. In not going with Ahoska, he might be making the wisest decision we’ve seen on the series to date, given our knowledge of the future. And while he can’t return with her due to his own philosophy, another unspoken layer is that even if he did, they couldn’t be together as they’d want to be (and as they pretended to be, in front of Death Watch), due to her status as a Jedi.

As with the previous arc, I also have to again praise the show for its use of Artoo, here repairing droids that Death Watch had used as target practice and then mobilizing them against Death Watch, to aid Ahsoka and Lux in their fight. Mighty, mighty nifty.