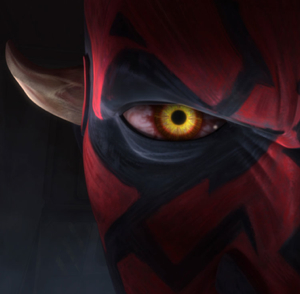 From the very first moment that the final two episodes of the fourth season begin, you know that something very bad is going to happen, when the usually-yellow Clone Wars title card instead appears in an ominous blood red. And here, after the last two Ventress episodes, I was assuming we wouldn’t be having more Dark Side episodes for a while.

Immediately thereafter, we’re reunited with Savage Opress, who is continuing his quest to find his long-lost “brother,” only now it seems that he is on the cusp of succeeding, as evidenced by Mother Talzin, who is still very much alive after the other Nightsisters were slaughtered on Dathomir (as it turns out, her appearance at the end of “Massacre” wasn’t as a sort of Dark Force ghost as I had initially assumed but evidence that she is powerful enough to dissipate into a fog), continuing to guide him. Meanwhile, other Force users across the galaxy, including Anakin, Yoda, Obi-Wan, and, most intriguingly, Ventress–who I had never expected to see again so soon but whose character evolution continues to proceed in this arc–sense a disturbance approaching. And from their reactions, if there was any doubt in anyone’s minds that Savage’s brother would be revealed to be Darth Maul, that is immediately cast out.

Although his identity is guessable (and deliberately so), what is genuinely surprising is the state in which Savage ultimately finds Maul, broken not only in body but mind, as well. Rather than the arrogant, powerful, former Sith Lord that Savage and we might have been expecting, Maul is a weak, shattered remnant of his former self, driven completely mad by the horrific pain of having survived being cut in half by Obi-Wan’s lightsaber, originally kept alive on his overwhelming rage and thirst for vengeance alone (before now, we might have expected that the most physical and psychological pain Obi-Wan will ever have inflict upon someone is when he will leave Anakin burning alive on Mustafar after their climactic duel in Revenge of the Sith, though in the case of Maul, it is completely unintentional; in both cases, however, a left-for-dead enemy will later resurface, even more terrifying than before) and now on the living creatures that his sole ally up to this point, a snake-like creature, Morley, can bring to him in his underground cave on an Outer Rim planet used solely as a garbage dump. 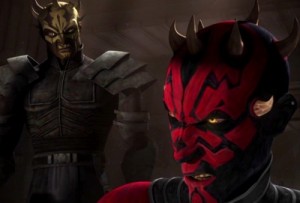 Even more horrifyingly, Maul’s upper half is now merged with a scorpion-like assemblage of mechanical parts, making him seem like a giant, prehistoric insect, scuttling around in his cavern, completely deranged. He is a perfect representation of both the power and downside of the Dark Side–yes, it can keep you alive and nourish you but it will also drain you of every remnant of what makes you you, instead leaving a primal husk of raw fury. Once again, we see how Anakin’s inability to let go is reflected in the Dark Side. All that is left of Maul is his anger at Kenobi for what he took from him.

Completely devoted to restoring his brother to his former self, Savage takes the fearful Maul back to Dathomir–still littered with the corpses of the fallen Nightsisters–where Mother Talzin weaves a dark spell that both eradicates the madness from Maul’s mind and fashions a new pair of legs for him out of the pieces of the very droids who destroyed her sisterhood, yet another metaphor for the Dark Side’s inability to move on, as well as its insatiable hunger for revenge. She clearly plans on eventually using Maul and Opress to exact her vengeance upon Dooku. Savage alone is formidable enough, but two Zabrakian brothers, fueled by not only their own inner strength but Talzin’s Dark Side magic truly are potentially capable of challenging Dooku. As a first step, however, she encourages him to go after his old enemy, Obi-Wan, presumably to appease him before then getting him to face the very Sith Lord that his former master, Sidious, has replaced him with, something which will clearly bring him great anger and resentment, as well.

The show then establishes just how heartless and cruel Maul and Opress are that, once Maul’s power and mind are restored to him, the first thing they do is land on a peaceful planet and slaughter its inhabitants, including women and children, in order to lure Obi-Wan over to them. For Obi-Wan, this is truly a nightmare made flesh. These innocent people aren’t only suffering at the hands of the very creature who slaughtered his Master but this monster has randomly selected them in order to punish Obi-Wan for his own actions. It is so typically Dark Side that Maul believes Obi-Wan owes him for having mutilated him, even though Obi-Wan had been defending himself against the attack of Maul, someone who would have killed him in a heartbeat and had only just before killed the person who was closest in the world to him, the difference being that, as a Jedi, Obi-Wan doesn’t seek revenge.

Just as when Qui-Gon was originally murdered by Maul, however, this scene is arguably the only time in the entire on-screen saga that we ever see Obi-Wan completely lose his Jedi calm. In response to Maul taunting him, Obi-Wan finally attacks with anger not unlike that of Luke when fighting Vader in Return of the Jedi or Anakin on numerous occasions. Even that first time around, when Obi-Wan was of course more emotional than usual, with his Master just having been killed in front of him, it wasn’t quite as scary to behold as this. 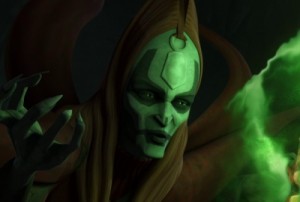 Which makes it even more supremely, wonderfully ironic that the person who comes to Obi-Wan’s rescue is Asajj Ventress of all potential possibilities, which is fitting for many reasons: because having herself been betrayed by Savage, she knows all too well how potentially world-dominatingly dangerous he could become with a powerful, former Sith brother on his side; because she is also a Dark Side apprentice who had been disowned by her Master (although, of course, for drastically different reasons) and spent a long time similarly drifting, deprived of the anchor and position she used to define herself by; because she is the former apprentice of the very Sith Lord who replaced Maul in the first place; because she knows what it’s like to be driven by a need for vengeance; because she and Kenobi’s sparring had always involved a very dark form of humorous flirtation between them.

After her first chronological appearance in “Cat and Mouse,” I never would have expected in a million years that the two would ever find themselves allied, and it is to the enormous credit of the writers that they manage it here without ever diluting Ventress’ character. Just as with her last appearance, her heart didn’t suddenly “grow three sizes that day”. Rather than being “good” now, she’s simply no longer aligned to the cause she once was. She’s now operating in her own self-interest, and in this case, trying to keep Opress and Maul’s power in check (and getting back at the former for what he did to her) is certainly in her own best interest. At the same time, however, she doesn’t have to rescue Obi-Wan and yet still does, implying that she has grown and changed, but in a way that doesn’t compromise her integrity.

And although she and Obi-Wan manage to escape by a hair, they are unable to defeat the two brothers, who, it seems, are now going to cause quite a bit of trouble not only for them but potentially even for Chancellor Palpatine himself.