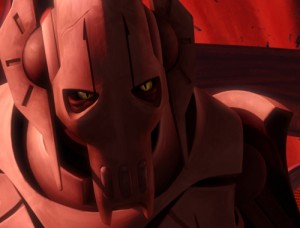 After three episodes away from Anakin and Ahsoka, these characters return to prominence in a big way in these next three episodes, 1.02-1.04 (“Rising Malevolence,” “Shadow of Malevolence,” “Destroy Malevolence”), which form a trilogy surrounding a new, deadly battleship that the Separatists, headed by the cyborg General Grievous, use to wipe out scores of Republic ships and troops. Because these episodes are so tightly linked, I’ve decided to discuss them together, rather than separating them into their various components, as I did for the last post.

What makes the Malevolence particularly interesting is how this ion cannon that discharges a pulse wave capable of disabling all other electronics in the area (and how much do I love the irony that droids are using a weapon that breaks machinery?) both foreshadows and seems related to the Death Star. Technology-wise, it looks very similar and it has a related, though not identical, function. They both seem to either utilize similar tech or to have been designed by the same people. It’s possible that Malevolence was created in part to prepare for what would be needed to make a space station capable of wiping out an entire planet with a single shot.

Ultimately, what the two have most in common is that they are both merciless weapons, in the hands of a merciless enemy. The Death Star annihilates a planet instantaneously, while the Malevolence leaves Republic ships dead in their tracks, making it easy for the droids to come in and wipe out the survivors one by one, not only via firepower but the seemingly mundane and all-the-crueler-for-it act of dismantling the ship’s windows, leaving the helpless soldiers to asphyxiate in space. 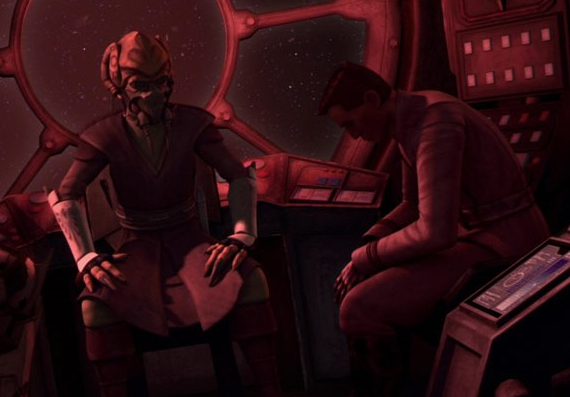 Plo and a Clone

In the second episode, this complete lack of human compassion on the part of Grievous and his droids, as well as on the part of Dooku–which is even more shocking to observe, given that he is human–is demonstrated by their plan to demonstrate their weapon’s might by attacking a medical base in which clones wounded in battle are recovering. Right before giving these orders, Dooku admonishes Grievous for breaking a droid that had annoyed him, not out of any sense of morality but because each droid is expensive. It says a great deal about Grievous’ evil that he will so cavalierly destroy one of his own. And, yes, since it has been carefully established both in the film universe and on Clone Wars that droids in the Star Wars universe are sentient–capable of thought, pain, and fear–what Grievous does is akin to murder. As Dooku points out, the Jedi do not treat their clones this way–which we have already seen numerous times in this series, even in this very trilogy of episodes, in which the last few surviving clones on the ship with Jedi Master Plo repeatedly tell him that they are expendable and not worth saving, and he answers each time that they are wrong and that he would give his life to defend them–although, ironically, Palpatine, who ordered their creation in the first place in order to eventually destroy the Jedi, certainly does.

But, of course, Dooku’s saying this only underlines just how malicious he is. He knows that the Jedi consider the clones as people, as well as just how much it will hurt them to lose a hospital’s worth of soldiers they were trying to heal. If the Jedi truly considered the clones as tools, they wouldn’t feel to need to rehabilitate them in the first place but just let the “broken” ones die and order a new batch to replace them. As a strong counterpoint to Dooku, we are also shown a Kaminoan physician, who refuses to leave the severely wounded clones to die, even if it means sacrificing her own life in the process–just like the Toydarians in the previous episodes, we are shown that not all creatures of the same species are of the same mind in the Star Wars universe. The Kaminoans we saw in the past might have seemed cold, aloof, and practically heartless when it came to the clones, but this one certainly isn’t. 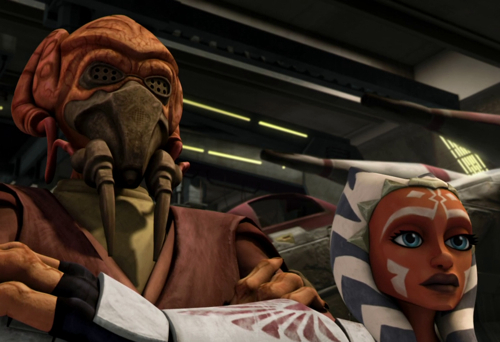 And speaking of compassion, we also have Ahsoka, who wants to rush in to examine the battlefield where Plo very well might have died, despite the danger to herself and the odds that no one survived. Just as importantly, she speaks to Anakin’s sense of compassion, too. What she doesn’t yet know how to do, which Anakin is trying to teach her, is how to deal with the Jedi Council. When Yoda, Obi-Wan, and Mace Windu give Anakin and Ahsoka their orders to give up the victims of that battle as lost, Ahsoka speaks out of turn, voicing her desire to investigate, for which Anakin admonishes her before his Masters. Only after they’re gone does he reveal the truth, that he was always planning to go there but that when handling the Council, one must act deferentially and obediently and only break their rules afterwards. On the one hand, of course, this is highly problematic, as Anakin is teaching his Padawan to disobey her superiors, which is a fairly big no-no, while on the other hand, it springs from Anakin’s immense sense of compassion, which is both his greatest strength and his greatest weakness. It’s difficult to fault him for being so brave and for valuing life to such a degree that he refuses to leave people to die if there is any chance that they could be saved. At the same time, he is being reckless and taking an enormous risk.

And, furthermore, his behavior is indicative of his inability to “let go,” as I referenced in my first post and as is examined in much further depth in this essay. It’s a difficult situation, because the Jedi at times seem callous themselves in how they preach against having attachments–on the surface, it seems counterintuitive that the compassionate Jedi knights can be so pragmatic about love and death–and yet Anakin also misinterprets their reasoning. Rather than being heartless, the Jedi are actually instead admonishing against allowing yourself to give in to emotion and hold too tightly to your own ideas of what the world should be. Yes, people die, and that is tragic, but from the Jedi perspective, life and the material world as we know it is but one step in a much greater journey. That isn’t to say that the Jedi think that the hereafter is better than being alive but rather that one should do the absolute best that one can but also accept when things don’t turn out as planned or predicted. Anakin’s problem is that he can’t let go of the past or his grief, which is a fascinating double-edged lightsaber.