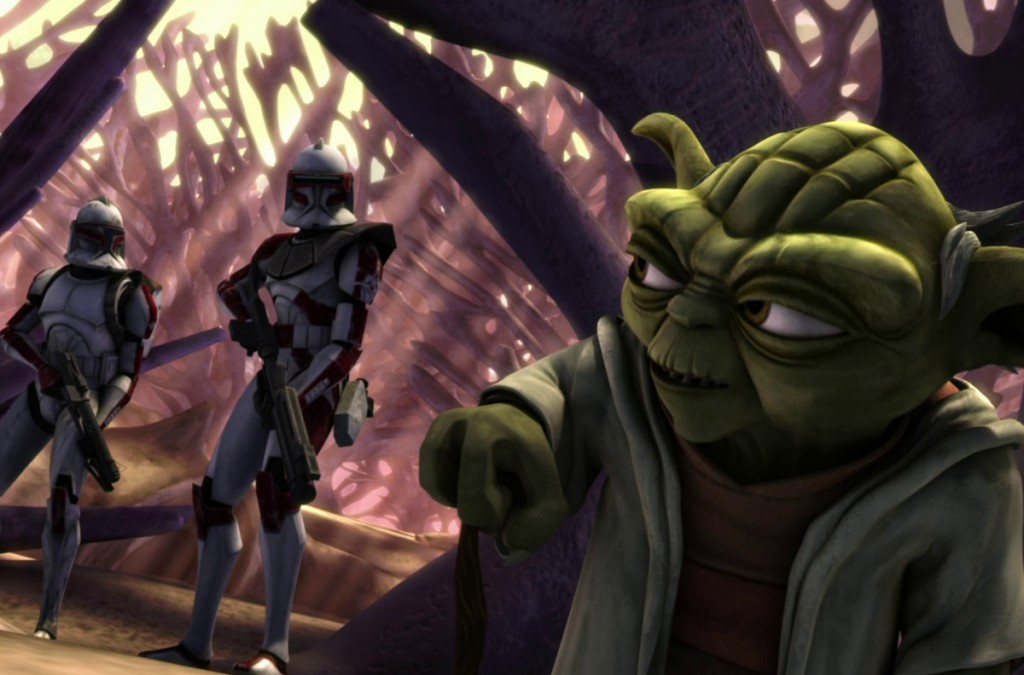 And then we come to my favorite episode thus far, which interestingly was also the first episode to air. Following immediately on the events of “Supply Lines,” the good king, Katuunko, is meeting with Yoda to discuss allowing the Republic to form a base on a Toydarian planet, and thus officially aligning with the Republic in the war. Before Yoda can arrive, however, Dooku’s assassin, Ventress arrives to interrupt, presenting a challenge: if Yoda, whose has landed elsewhere on the planet in an escape pod after her droids destroyed his ship, can make it to the meeting without being killed by her mechanical army, Katuunko will join the Republic, and if not, he will join the Separatists, a deal to which both he and Yoda agree.

In many ways the most straightforward episode so far, in that it is basically composed of a series of encounters between Yoda and his small group of clones versus the battle droids, it is also the most purely entertaining. For the first time arguably since The Empire Strikes Back, we get to see the fun, mischievous side to Yoda. In that film, it seems that his initially silly exterior might be a result of either slight madness after years of being alone on that swampy planet in the Dagobah system, or simply a persona he put on to test Luke, particularly since Yoda has always been nothing less than utterly serious in the prequel films. On the other hand, the prequels mainly presented Yoda either in the council room or in fierce battle under dire circumstances, and didn’t really have the time to show him on his “downtime,” so to speak. Not that this is particularly downtime, since it’s still a fight for his life, but here he isn’t fighting against a Sith Lord but against things that there is no real question in his mind that he can best, battle droids, and so he feels more free to partake in that aforementioned kooky, tricksterish side, which this episode finally confirms is, indeed, a true and significant part of his overall makeup. Not since Empire have we seen such a joyful, playful Yoda–he defeats the droids with such ingenuity and humor–and it is thrilling to behold. Again, this fits into the mythic tradition of the wise man playing the fool.

How Yoda relates to the clones is also fascinating, because while some of the other Jedi might just see them as tools, one of the wisest of them all, Yoda, actually wants to help foster their individuality–thus again echoing the thematic arc that has been building since “The Hidden Enemy”. He encourages them to think of themselves as separate people, to relish their distinctiveness, to realize that they aren’t just scientifically-grown copies but that the Force flows through each of them, just as it does for all living beings. This is a beautiful moment that reasserts Yoda’s greatness, wisdom, and kindness, even as it is again redolent with dramatic irony for the impending tragedy of Order 66. At the same time, this reiteration of the fact that the Force flows through living beings is also indicative of how Yoda and the clones will come to defeat the battle droids, namely by thinking of them not as an enemy army but as machines that can be taken apart like any object.

The episode also ends on that great moment in which Yoda disarms the supremely arrogant, hubristic Ventress without so much of a droplet of sweat forming on his little, green brow–which is extremely satisfying, to say the least.