[Note: The following review contains spoilers for all aired episodes of Penny Dreadful, including the most recent, “Demimonde”.] 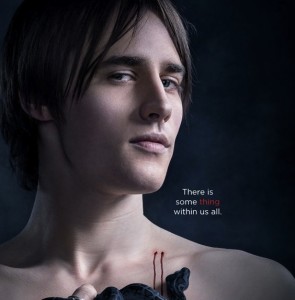 1. I continue to be fascinated by Penny Dreadful‘s narrative structure. Halfway through the season now, and we still don’t know what the overarching plot actually is. We have plenty of atmosphere, lots of character set-ups, and mythology hints, but no traditional plot per se, and for now, as long as it continues to remain this mesmerizing, I am fine with that. A lot of shows are described as “novels-for-television” but few mimic the structure of an actual novel–which could theoretically take many chapters to reveal its ultimate shape–to the extent that this one does.

2. This episode is primarily linked by themes, the major one likely being various emerging, potentially monstrous species that seem as if they might be set to supplant humanity. While this is made most overt through Caliban’s dialogue to Frankenstein, ironically turning the tables by calling him “demon,” and commenting on how easy it would be to snuff out his life, contrasted with the new race of immortals of which he seems to be the first, this is also echoed in the form of the vampires that Frankenstein is studying with Sir Murray and now Van Helsing, Dorian Gray, and the werewolf killer, who we learn in this episode is indeed Ethan Chandler, or at least seems to be. Whereas most steampunk focuses on an emerging new world in terms of technological progress, Penny Dreadful intriguingly goes in the opposite direction, with a potentially nightmarish world emerging as a result of man’s primal urges, buried beneath the veneer of polite society, resurfacing.

3. Related to that, the title, “Demimonde,” works on numerous levels. While it is probably most often used as a synonym for “prostitute,” thus describing Bronna, its broader definition–most often used in the 18th and 19th centuries–applies to people living ostentatiously hedonistic lifestyles. In French, the term literally translates to “half-world”. And so the title also refers specifically to Dorian Gray, of whom we learn more in this episode, as well as the the other various characters of the series who live in a liminal space between humanity and the supernatural world. Even Bronna fits this description. She’s dying and in some ways sees herself as already no longer being a part of humanity. Referring to herself, she tells Ethan that he’s been “fucking a skeleton”.

4. As with his previous appearance, the handling of Dorian Gray is brilliant. Reeve Carney does a superb job of conjuring up the character’s hedonism and simultaneous disaffected boredom with such, his callousness, his alienness, his fascination with the new–which is, of course, ironic given that we now know that he is indeed much older than he looks. As I’d guessed in his first appearance, Dorian already has the infamous portrait that ages and grows increasingly hideous as his soul continues to darken, so that he doesn’t have to–which is revealed in a truly stunning opening sequence in which he stares off at the walls during his own orgy, completely ignoring the writhing bodies around him and the hot young guy kissing him, until later when he descends into a secret chamber alone, to stare at the picture, as opera plays in the background. What I really like about the depiction is that while he’s certainly a bit “emo,” he’s also not humorless. It’s not that he’s given up on life. He simply craves newness, which he so rarely gets a chance to experience. In his first episode, he was temporarily diverted by getting the chance to have sex with a “dying thing” but found himself far more taken with the mystery of Vanessa Ives, who continues to occupy him in this one. Fascinatingly, she and Ethan are the two characters who spark his curiosity, Vanessa due to her enigmatic air and Ethan likely due to his rugged Americanness, as well as submerged kinship. As it turns out, they are both monsters, in different ways.

5. The blistering final sequence, in which Dorian and Ethan get wasted together on absinthe, provoking not only a major revelation but sex between the two of them, is one of the best of the series to date. The two men actually have a great deal in common. They both have dark secrets–of the natural and supernatural varieties–they have both used copious amounts of sex and alcohol in attempts to numb their pain and cope with living, and they both have animalistic natures. While I can’t say with 100% certainty, my interpretation of the final scene is that, although Ethan knows he is a werewolf, he doesn’t actually retain memories of his actions when he is taken over by the wolf, and that somehow the absinthe has managed to break down those mental barriers and reveal the truth to him: that he is the killer. The imagery comes together beautifully, as he makes all of those connections between peoples’ various reactions to the killings, his own waking up in odd places seemingly sans memory, and even the grisly play he and Bronna had seen that night. As to why he crosses the room and kisses Dorian, removing his shirt (and while I wasn’t fully surprised with how the scene culminated, I wasn’t expecting him to initiate that aspect of the encounter), it’s either because he’s bisexual and has always known it or that, in this state, he senses that strange, supernatural kinship with him that overrides traditional Victorian societal boundaries. He senses the primal transgression within him, and both he and the wolf inside him want to taste it. Or it could be some combination of the two.

6. I’m also really fascinated by the father-son/sibling rivalry relationship forming between the trio of Sir Malcolm, Frankenstein, and Chandler, with Frankenstein growing jealous of Chandler for seeming to be the more traditionally rugged man that someone like Malcolm would be proud to call a son–he even wants to bring him along on an African adventure rather than the smaller, seemingly weaker Victor. Malcolm, however, tells him later in the episode that that’s no reflection on preference. He actually cares a great deal more for Victor, viewing Chandler simply as brawn and a hand on the trigger. This is interesting, because Victor is craving a father figure, just as his own creation who he spurned, does or did. Furthermore, given the fan theory that Bronna is going to become the Bride of Frankenstein, this could get very interesting because it would put another, even more pressing conflict between the two of them, if/when Chandler found out that Victor has turned the woman he loves into a mate for his creature.

7. Speaking of Bronna, the Grand Guignol sequence is superb. I love her elation at getting to go to the theatre, as well as her surprising timidness at the show’s gory elements. There’s also a dark undercurrent not only to the fact that we later discover that her current paramour is himself secretly a monster (which she doesn’t know), but that she herself similarly spews blood due to her illness. Piper does a fantastic job contrasting Bronna’s worldliness with her awe at getting to see a show, and then experiencing the dazzling effects, and is heartbreaking in the scene in the lobby, where she feels out of place amongst the society people such as Dorian and Vanessa, with whom he speaks. She rushes out and pushes him away, angry at him for giving her the illusion, for even a short amount of time, that she could escape her lot in life. I almost wonder if she has already died now, after having crawled into the corner, coughing up blood, and if Victor or Caliban will discover her there.

8. The Vanessa Ives stuff continues to be intriguing. I’m very eager to learn more about her relationships with Malcolm and Mina, particularly given the additional clues dropped in this episode. It’s particularly interesting how she maintains this aura of aloof mystery, yet at the same time isn’t as unflappable as her facade would suggest. The eerie conversation with the girl about people not staying buried does get to her, as does Dorian Gray, particularly in that gorgeous scene in the greenhouse. In many ways, she is as intrigued by him as vice versa, and it’s interesting that, in their scenes together, he seems to be the one more in control of the situation, and she a bit disarmed, when nearly the reverse occurs whenever they are apart.