[Note: The following review contains spoilers for all aired episodes of Penny Dreadful, including the most recent, “Resurrection”.] 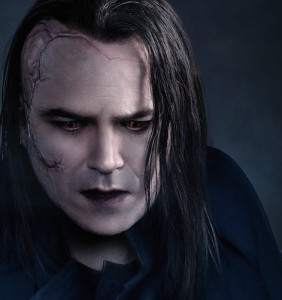 After the shocking twist that brought last week’s episode of Penny Dreadful to a grisly halt, the third picks up exactly where we left off, with the murder of Frankenstein’s second creation, Proteus, at the hands of his first “child”. The monstrous prodigal son returns–or rather tracks him down to London–with nothing but contempt for the father who birthed, then abandoned him.

Well, to be precise, the episode actually opens on a flashback that explains Victor’s lifelong, morbid fascination with death and his desire to resurrect what has been lost. This brief peek at two childhood traumas of his, which follow in quick succession, has the feel of a dark Victorian storybook gone horribly wrong or something out of either the life or work of Edgar Allan Poe, the stark, haunting image of the corpse of Victor’s childhood dog, with mealworms pouring out of the eyes and mouth, soon afterwards giving way to his mother–just as she is reassuring him about the possibility of death being simply a transition to another, possibly better place–coughing blood in his face (a disturbing, deliberate echo of Bronna and the effectively immortal Dorian Gray in the previous episode) and soon afterwards succumbing to disease, likely consumption. The young Victor had just been speaking to his mother about how poetry always paints death as serene, and yet as he watches her painfully expire, her dignity completely lost, you can see his young face solidify with the resolve of cracking the mystery of that which takes that which he loves away from him.

Which leads us back to the present day and the extreme irony that Victor’s latest successful attempt to bring back the dead in the form of a man who he has come to love very deeply has just been violently taken away from him by the vengeful creature who was his first attempt to do so. And because Penny Dreadful loves subverting our expectations in surprising yet ultimately disarmingly understandable ways, moments after witnessing the Creature’s vicious, fatal attack on his “younger brother,” we actually come to see his perspective. The first thing that might strike us is how literate and lucid he is, speaking in the tones and words of a gentleman poet–a sharp contrast to the horrific act of violence he just perpetrated, and a remarkable paradigm shift between him and his father, who is cowering on the floor and crying like a child, while he stands above him, confident and powerful.

By contrast, their first moments together were even more horrifying than Proteus’ murder. After seeing the flashback to the Creature’s birth, one can truly see why Victor was so awed by Proteus’ peaceful awakening into our world. The Creature’s, by contrast, is gory and terrifying, the “newborn baby”, covered in blood rather than amniotic fluid, screaming and howling in fear and confusion, not knowing who, what, or where he is, and receiving only fear and revulsion from Frankenstein. This is yet another of those brilliant, electrifying Penny Dreadful moments that are impossible to look away from, no matter how uncomfortable they might be to witness. As the Creature, Rory Kinnear expresses such primal, feral anguish in the flashback, and such almost calm civility in the present, despite the fact that he had literally just torn a man in two with his bare hands, which speaks to the conflict at the heart of this character, who has basically become a monster as a form of lashing out at a society that defined him as such before he had a choice in the matter.

As the episode unfolds, he continues telling his tale of rejection to Victor, of being reviled and often beaten where ever he went, due to his monstrous, scarred visage. The only person who shows him any compassion is a man called Vincent Brand (played by English character actor, Alun Armstrong, probably best known internationally for creating the role of Thenardier in the original cast of Les Miserables on the London stage), and even he seems primarily interested in him due to his external ugliness. Brand runs a theatre, fittingly called the Grand Guignol, which puts on gory productions based on penny dreadfuls, such as the famous tale of Sweeney Todd, the demon barber of Fleet Street (although I had hoped for Sweeney Todd to appear as a character on the show, I was very excited for him to show up in some form here, particularly given it’s the first story I thought of while watching the pilot), and he offers him a job there. It seems that he might have wanted to eventually work up to putting him on stage, but at first, he contents himself with hiring him to operate the backstage effects. Fascinatingly, it seems that this man became the Creature’s adoptive father of sorts, even dubbing him with a Shakespearean name, just as his “actual” father later did for his “younger brother”. However, whereas Frankenstein gave his second creation the name of a Greek god, the Creature is given the name of a monster, Caliban from The Tempest. He, however, at least at the start, isn’t aware of its negative connotations, instead responding to the aesthetic sound of the name, which delights him.