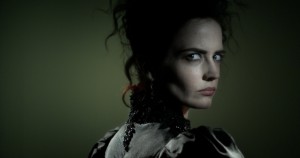 As much as I adore the Frankenstein material, easily the most riveting sequence of the entire episode is the séance for which it is named, and not only because I’ve always found the Victorian fascination with spiritualism…fascinating. It’s mainly due to Eva Green’s absolutely magnificent performance. One of the things that has surprised and struck me most about Penny Dreadful is what an actors’ show it is. Quite unusually for horror (although not unheard of, as Hannibal does it, too), it relies on actors performing wonders with their own natural abilities to mesmerize an audience, rather than allowing special effects and music to carry the scenes for them. That isn’t to say that there isn’t some beautiful camera and effects work in the scene, but all of it simply supports Green’s stunning work, as Ives is possessed by at least one spirit who manages to get under Murray’s skin.

Delivering essentially one very long monologue, Green is completely captivating. In this ADD era of quick cuts and short scenes, it’s remarkable just how much time is devoted to this moment, and how impossible it is to tear your eyes away from it. If it had gone on for an entire episode, I don’t think I would’ve minded. Time and space seemed to fall away. Also interestingly, it’s very hard to tell yet exactly what is happening in it, except just seeing the look on Murray/Timothy Dalton’s face throughout speaks volumes as to what might being implied. I wasn’t exactly sure if this was supposed to be his daughter, Mina, talking. At first, it seemed like it was a child of Murray’s who had been dying. Is this meant to imply that Mina was dying? Perhaps this was when she was slowly being fed on by Dracula, assuming they’re following the novel? Or perhaps this is a sibling of hers?

Also, after the spirit seems to “die,” Vanessa awakens again, still possessed, and it’s not clear whether this is another being or not, but suddenly, it gets very coarse and vulgar, climbs the table, and starts to imply–I think–that Murray had a sexual relationship with his daughter. Though it’s not clear if it was Mina or another daughter or whether it’s the truth, although from the look of Murray’s face, it seems to be. His look seems to have a glare of horrified recognition in it. If so, this shines a whole new, much darker light on his intentions in getting her back. Is he in love with her? Does he simply blame himself and want forgiveness? Either way, Dalton’s performance is just as masterful as Green’s, as the viewer’s perceptions of his heartbroken, fatherly love suddenly turn to anger and fear.

I also love that, afterwards, Vanessa is disinvited from returning to Lyle’s home, even though it was clear that she wasn’t in control of herself at the time. How very Victorian–welcome supernatural forces into your home, as a form of party entertainment, but god forbid they start being vulgar! And then blame the possessed person for what happened as a result of your idea. Speaking of which, I also absolutely love Simon Russell Beale’s Ferdinand Lyle. In an otherwise incredibly dark show, he is currently the sole source of comic relief, and it is a breath of fresh air, and often a deliberately jarring one. He manages to make him ever so slightly cartoonish but never in such a way that it takes you out of the show. Instead, it’s off-kilter quality somehow manages to fit perfectly, not unlike Raul Esparza’s Frederick Chilton and Michael Pitt’s Mason Verger on Hannibal.

Back to Vanessa, we still don’t know what’s up with the strange prayer scenes in the pilot, however a quick shot of her bedroom in this one seems to be the same room that the woman was praying in last week, so I’m assuming now that that was Vanessa. In the pilot, I had thought it might have been a twin sister, due to how different her characteristics seemed to be. Now, I’m very curious as to what sort of secret she’s harboring. Her public face versus her private face seem very different. 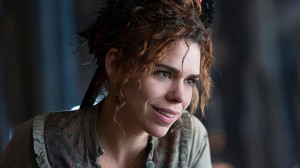 I have the least to say about these characters, because we haven’t really gotten a chance to know the former much yet, and the latter is surprisingly less prominent, particularly given it seemed last week that he might be the main character. Which is also interesting, as it goes hand-in-hand with the mysterious nature of the show, regarding its central arc. Although Chandler was our introduction to Ives and Murray’s supernatural world, being an outsider both to the country and their knowledge, now it’s already unclear what part he will play in the story. And I like that. I also find it interesting that he seems to be pursuing Bronna, at least to some degree, even with the knowledge that she’s sick. For someone who seems to be a bit of a player and an alcoholic, I wonder what his endgame is. I can’t imagine he wants to sleep with her. Perhaps she just intrigues him.

And she is indeed very intriguing. Even without giving a great deal of information about her other than her Irish background and a few hints of what she’s been doing in London, Piper plays her in such a way that she seems full of interesting secrets. The only qualm I have about her performance is that her Irish accent is so thick, I had to rewind some of her lines numerous times and practically squint my eyes to follow what she was saying (and I actually usually have a pretty good ear when it comes to understanding thick accents), and although that might be accurate, I would have preferred her softening it a bit or enunciating more clearly to make it more understandable. However, she plays the character’s alluring qualities well enough that you can often get a sense of what she’s saying, even if you don’t pick up every word.

And that’s all for now! Hope you’ll be back to continue this Penny Dreadful journey with me next week.