And then, in the final, shocking moments of the episode, all of that is ripped away when hands suddenly shove their way through Proteus’ abdomen from behind and tear him in two, to the horror of Victor. And then who should step out from the split, now-lifeless corpse but Victor’s earlier “son,” who is presumably the actual Frankenstein monster of legend? Which is a brilliant twist. Heartbreaking on the one hand, as the optimistic and kind Proteus is torn asunder by his jealous, older brother, like a resurrected Abel and Cain, while on the other, part of me is glad that Proteus doesn’t turn into a monster himself. Of course, there’s also a chance that John Logan–the creator of the series/sole writer of every episode of the entire season, remarkably–is tricking us again and Victor will be able to sew Proteus up and bring him back, and that he will still eventually become corrupted, as well. But for now, my assumption is that Proteus’ creation was always a misdirection and that he wasn’t ever the Frankenstein creation of legend.

Which, only two episodes in, is a rather ingenious twist that makes us have to instantly reevaluate all that came before it. For example, it places Victor’s tear at the end of episode 1 into an entirely new context. The first time through, we thought that he was crying due to the awe of discovering his theories had been correct and that he could create life from something already dead. Now, however, we realize that he was so initially afraid due to how his last “monster” had gone wrong, and that it was actually a tear of relief, since this one immediately seemed so gentle and different than the last. Now, we realize the caution he has taken with Proteus since that point has all been due to worry of things going wrong as they had in the past.

Speaking of which, the name “Proteus” was such a fantastic choice for numerous reasons. Firstly, Proteus was a Greek god of the sea, which is relevant because we learn, as the episode unfolds, that Proteus has memories of having been a sailor, and furthermore because the god, Proteus, has long been associated with the ever-changing, mercurial nature of the sea. He could change shape, like water itself. The original Proteus was known for being versatile, flexible, and adaptable. Like the original Proteus, this Proteus changed from one form to another–a corpse to a living thing. He also does a fairly good job of blending in when Victor takes him out in public (Proteus’ hand loving draped through his arm). As for the irony I mentioned earlier, the name, “Proteus” also derives from the ancient Greek word for “first” or “firstborn” (he was Poseidon’s firstborn). At the start of the episode, this seems very apropos. By the end, we learn that it isn’t true, after all, although Victor likely wishes it were. 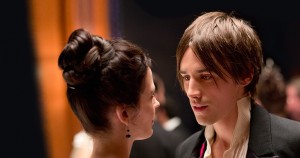 I was very excited when I first heard that Dorian Gray would be appearing on Penny Dreadful, and so far, I’m delighted with the depiction. Reeve Carney captures the young hedonist to a tee. The youthful, nearly porcelain, otherworldly beauty of his facial features are perfect, and Carney brings just the right amount of alluring, magnetic sexuality, along with a debauched, nasty undercurrent. The edges of this Dorian are not even slightly smoothed over.

I saw some people complaining that he is not depicted as being exclusively gay, however in Oscar Wilde’s original novel, Dorian Gray isn’t gay, either. He is a libertine, who would sleep with anyone or anything in his exploration of carnal pleasures. Now, Basil Hallward, the man who paints his infamous portrait, certainly falls in love with Dorian, and Dorian uses it to his advantage but doesn’t reciprocate the feelings. I would be disappointed if Dorian didn’t have sex with men over the course of the show because his no-holds-barred sexuality is crucial to his make-up, but to think that his sleeping with women is at all out-of-character to him is just plain wrong. He even falls in love with a woman, Sibyl Vane, in the book.

And even if the episode didn’t give us any overt gay behavior from him yet, we certainly get a taste of his extremely kinky side in the jawdropping scene in which he elects to have sex with Bronna (while their photographs are being taken) only after realizing that she has consumption. The moment in which she coughs blood on him is gross but also feels strangely artistic. The sense of triumph on his face is a brilliant and disturbing encapsulation of his character. The fact that he seems obsessed with having “sex with a dying creature” and that he isn’t concerned about getting sick leads me to believe that he already has his magic portrait at this point in the story–and that perhaps he has for some time and is already much older than he looks.

Also, interestingly, last week, I spoke about how the show manages to avoid the heterosexual male gaze, which is particularly rare for horror, let alone Victorian horror. If anything, the show has a gay male gaze, with the only full frontal nudity in the premiere being reserved for the male characters. That gay male gaze continues here. Although we do temporarily see Bronna’s breasts, the camera neither highlights nor leers at them. Instead, Dorian soon blocks her with his body, and the camera gazes intently, even hungrily, on Dorian’s muscular back and buttocks throughout their sexual encounter. It was only after watching this episode that I looked up John Logan and was unsurprised to learn that he is openly gay.

Later on, Dorian becomes the first person to truly get under the skin of the previously seemingly unflappable Vanessa Ives, and becomes entranced with her himself upon following her outside after the séance and seeing her fuck a random man on the street, she completely in power and control. They might be a perfect match.