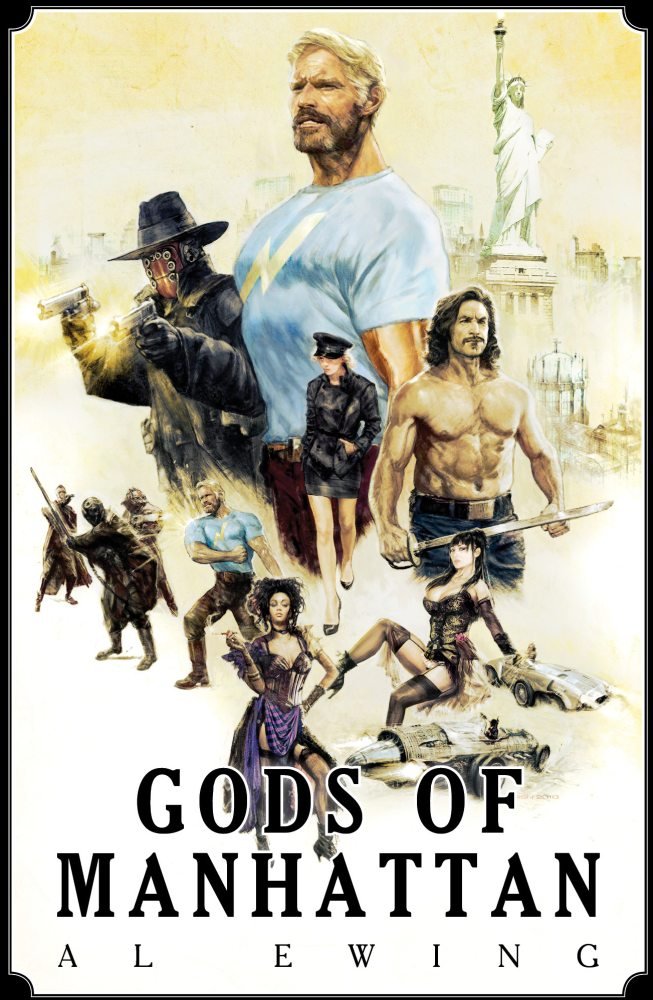 After carving his path of gory revenge through his Mexican hometown, El Sombra sets his sights on taking down the head of the beast, Adolf Hitler himself–who, in a neat parallel to the robotically-enhanced Victoria of Jonathan Green’s books, is himself now a brain inside a enormous and terrifying robot body–and in the second book in the series, Gods of Manhattan, he stops in the City That Never Sleeps while on his journey eastwards. Although his character links the series together, however, Gods of Manhattan could just as easily stand on its own as a breathtaking pastiche and deconstruction of practically every classic superhero trope. Although El Sombra appears, the book is arguably more the story of Doc Thunder, aka America’s Greatest Hero, a dashing man’s man and superhero who can leap tall buildings in a single bound, has flesh impenetrable to bullets, packs a mighty punch, has X-ray vision, and so on and so forth–you get the drill–locked in perpetual battle with supervillains such as the evil genius Lars Lomax. In a neat twist on the norm, Thunder is also bisexual, living in a polyamorous relationship with Maya, the Goddess of the Leopard Men (yes, really), and a super-intelligent, half-man, half ape named Monk.

Thunder isn’t New York City’s only superhero, however. Just as the righteous, law-upholding Superman has his dark mirror, Batman, a creature of the night who doles out his own brand of justice, so does Doc Thunder have the Blood-Spider, who, like Bruce Wayne, divides his time between being a vigilante and upholding the facade of a mindless, millionaire playboy. The Blood-Spider’s even more dangerous than Batman, however, because he sees anyone who gets in his way, including Doc Thunder, as not another hero with a divergent philosophy to his own but as an enemy. The Blood-Spider is Batman taken to his greatest extreme, defining justice on his own terms and considering anyone who doesn’t abide by his exact standards and who takes the law into their own hands (such as El Sombra, whose methods really aren’t different from his at all) as being just as much an enemy, ripe for killing, as the criminals he targets. Gods of Manhattan alone might be the best superhero story and simultaneous analysis of/response to superhero stories I’ve ever read.

And then we have Pax Omega, in which the series takes another completely-out-of-left-field turn–this time on a cosmic scale. Beginning before the creation of the world and structured as a series of vignettes that gradually jump in time all the way from the Big Bang to One Million A.D. and back again, Pax Omega is basically about everything. There’s really no other way to describe it. It wraps up the fate of several characters from the Pax Britannia world, even following up on some of the threads laid down in Jonathan Green’s books, and can be seen as a sort of complete history of this alternative universe, from start to finish–it’s certainly a masterpiece of pulp, often feeling like an homage sampler of basically every permutation of sci-fi and all of its sub-genres–but it’s also a philosophical rumination on the cyclical nature of history and progress; a dizzying riff on multiverse theory (which is amusingly tied into an art/philosophy movement dubbed “dreampunk”!); an examination of the entire alternate history genre; a complex conclusion to the series’ dissertation on heroism, with yesterday’s heroes and villains sometimes swapping places in the future, and vice versa, even later on. Is there even such a thing as a hero or a villain or are good and evil all just meaningless, irrelevant distractions that blind us to the fact that we are all tiny specks in a vast cosmic game? Pax Omega can be quite heady stuff. But it’s also extremely entertaining, pulp-infused fun. Can a book be a thoughtful sci-fi masterpiece and a wild, insanely fun ride through space and time simultaneously? Pax Omega proves that yes, yes, it can.

Picking a personal favorite between Ewing’s El Sombra and Green’s Ulysses Quicksilver books is quite difficult. They’re both so very, very different. I prefer the flamboyant Ulysses Quicksilver as a character. El Sombra, by his nature, is far more closed-off, reticent to speak, and, well, bugnuts, making him a hard protagonist to have warm feelings towards. And I think Green’s books are more purely enjoyable and their Victoriana world more richly detailed. On the other hand, Ewing’s are, in some ways, often meatier and utterly, practically indescribably unique. In many ways, the stunning prose and the seemingly chaotic yet actually fully, meticulously controlled narrative pyrotechnics are the true protagonist of Ewing’s books. I’ve never read anything quite like them. In the end, however, I don’t think the two series necessarily should be compared. They both may be in the same universe but in actuality, they’re worlds apart. But suffice it so say that I will definitely be seeking out further Al Ewing books in the future, because the man is frankly some kind of mad genius.