I opened Al Ewing’s El Sombra trilogy, expecting pulp–given that it was from Abaddon Books, I was expecting extremely well-written, layered pulp, but pulp nonetheless. What I wasn’t prepared for was how ingenious it is. I hate throwing around an elitist term like “literature” to describe a particularly brilliant sci-fi book, because I feel it’s a term that snobs often use to justify reading something that they otherwise would deem beneath their oh-so-refined literary palates, but for lack of a better term, if any pulp fiction I’ve ever read could be described as being literature, it is certainly this series.

It’s not just that the prose is often surprisingly, searingly poetic, and the characters and plotting multi-layered and complex, but also the manner in which it feels like Ewing is engaging in a dialogue with pulp, with the superhero genre, with the concept of heroism itself in a series that often feels like what might happen if a beat poet tripping the light fantastic wrote a comic book that incorporated and riffed on everything from Nazis to steampunk robots to time-traveling aliens. This isn’t the first story to take a darker, deconstructed look at comic books but, unlike say the arguably most prominent example, Alan Moore’s Watchmen, Ewing does so without sacrificing one bit of the whizbang joy of the genre. It’s brilliant and, yes, even thinky, but it’s also fun, and fun in that breathless sense of a brilliant author constantly subverting your expectations, pulling not only the rug but the floor itself out from under you in a world where anything can happen–where superheroes, gods, and devils both literal and metaphorical coexist. 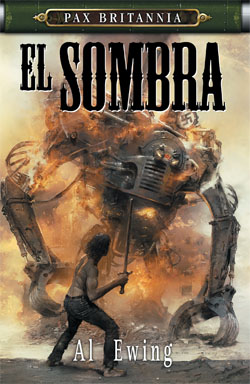 Technically, the El Sombra novels are set in Abaddon’s Pax Britannia universe, created by Jonathan Green for his Ulysses Quicksilver adventures, and there are definitely direct overlaps between the two–particularly in the supremely mindblowing third installment–but the El Sombra books exist on their own unique, all-but-impossible-to-describe wavelength that makes them feel all but completely divorced from those other Pax Britannia series, and not only because they’re set in America–the USSA, or United Socialist States of America, to be exact–although the fact that we never see the lovingly recreated Victoriana sci-fi of Green’s series does help it forge its own voice. Whereas the Ulysses Quicksilver books spring from the stories of Jules Verne, Mary Shelley, Arthur Conan Doyle, H. G. Wells, Robert Louis Stevenson, and so on and so forth, the El Sombra books are written more in the language of American cultural mythology, with influences and references such as Spaghetti westerns, 1940s adventure serials, DC characters such as Superman, Batman, and Lex Luthor, 1960s postmodern art by Andy Warhol, and even historical figures who have become folk heroes of sorts, such as Ben Franklin.

And just as the El Sombra books are markedly distinct from the Ulysses Quicksilver books, so are they markedly distinct from one another. It’s rare that a single series written by the same author contains such vastly divergent entries. The first, simply titled El Sombra is basically a spaghetti Western/revenge fantasy detailing the origin story of El Sombra, who began his life as a weak-willed poet named Djego who wasn’t even very good at poetry, until his village was attacked by the Nazis during his brother’s wedding, leading to the slaughter of the woman he loved (his brother’s bride), his brother, and countless people who he grew up with. Those who survived were subjugated by the Nazis, who were attempting to perfect an experimental program of breaking peoples’ spirits and sense of individuality until they became the equivalent of human robots. Djego, however, somehow escaped and spent 9 years alone in the desert, during which time some unexplained mystical process turned him into El Sombra, a masked vigilante who, like a caterpillar in a chrysalis, emerges after almost a decade in the form of a heartless, righteous force of fury with near supernatural strength and agility, able to singlehandedly take on the Nazi hordes and win, slaughtering each one in jawdroppingly inventive ways. He’s basically Zorro crossed with Kill Bill‘s The Bride, riding on passion and hatred and bloody, bloody vengeance.

And one of the most distinctive aspects of this book is that these characters aren’t the watered-down archetypes that Nazis often become in pop culture. Ewing doesn’t pussyfoot around their monstrous actions. In a movie like Raiders of the Lost Ark, for example, we know the Nazis are the baddies but they’re also baddies in a very comic-book sense. We don’t ever see them doing anything nearly as reprehensible as the historical Nazis, because it would have made the Indiana Jones series far too grim. In El Sombra, however, despite the pulpy, steampunk trappings, these Nazis are Nazis, with all of the sociopathy and inhumanity that that implies, such as concentration camps, grisly scientific experimentation on people, and the like.

This makes El Sombra’s revenge all the more satisfying, because he isn’t fighting against evil as an abstract concept but against flesh-and-blood people who have nonetheless become twisted into monsters, whether or not they are those who actually revel in their actions or are simply following orders. At the same time, Ewing inspires us to question whether we should be feeling satisfied. He gives us flashes of the lives of each of the men that El Sombra kills before he kills them, so we can see them as people–many of them everyday people with families and loved ones; some of whom might behave the way they do due to the poisonous society in which they were raised. That isn’t meant to excuse them, but it does allow for a more complex view of the issue. And with his bloodlust and refusal to suffer a Nazi to live or to show any compassion or mercy when dealing with them, has El Sombra not become a monster, as well?