These events are particularly interesting and ironic, given that when Helen had faked insanity, along with the murder of her beloved friend, the Big Guy, in “Veritas,” one of the pieces of “false” information that she had leaked in order to trap the traitorous psychic (played by Eureka‘s Erica Cerra) was that Big Bertha was still alive. Helen was playing a very dangerous game there, not only in lying to all of the rest of the network but in doing so by using another lie that she had told them earlier, thus reasserting that falsehood as the truth. Her hubris, however, assures her that everything will be all right and go according to her plans, and in the case of “Veritas,” it does. 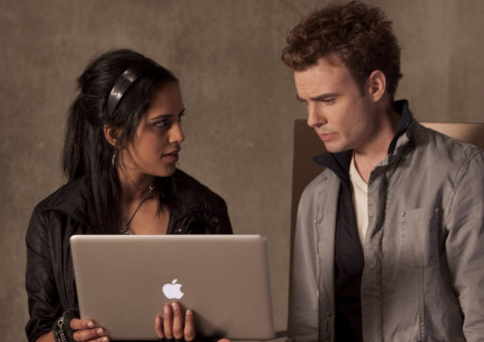 Kate Freelander (Agam Darshi) and Will

However, it does make the revelation that Bertha was actually alive come across as all the worse to the other heads of houses, and furthermore, whether or not her feigned mental illness was necessary to uncovering the villainous psychic, it certainly contributed to the overall feelings of unease with how Magnus runs things that sets the stage for the events of “Kali”. It’s not clear if she’s partially off her game due to her grief (and we see Magnus making more mistakes than ever before this season, one of which–ironically her attempt at removing her longevity–could have potentially destroyed the entire world, in “Pavor Nocturnus”), but I wouldn’t be surprised if there was a direct correlation between Magnus behaving more autocratically (for lack of a better word) towards the rest of the Sanctuary network and her daughter’s death.

This season also welcomes a new character, Kate Freelander (Agam Darshi), who I wasn’t surprised to learn was not well-liked when she first joined the show. And I completely understand why: she’s loud-mouthed, initially abrasive, neither warm nor cuddly, and, oh yeah, starts out working for the other team, not to mention the fact that she was replacing the departing Emilie Ullerup, and fans are always slow to embrace new actors who are taking the place of old ones. I’ll admit that I wasn’t her biggest fan at the start, but here’s the thing: we aren’t supposed to be big fans of hers at the start. The other characters certainly aren’t. But over the course of the season, I warmed to her a great deal, just as the other characters did. Ironically, Kate isn’t so different from Magnus in some ways. She plays her cards close to her chest and tends to deflect questions about her past with humor.

In the excellent “Penance,” guest-starring Tapping’s much loved co-star, Michael Shanks, from Stargate SG-1, we are finally allowed a glimpse into what makes Kate tick, and it really helped me understand her as a person and care for her. Darshi’s fantastic performance helped enormously too, of course, proving that she can play drama as well as comedy. And it’s to the show’s credit that they didn’t reveal this information until late into the season, because it wouldn’t have been organic to try to get us to like her too soon. We had to acclimate ourselves to Ashley’s absence, and trying to force Kate into “likability” wouldn’t have worked. This way, we gradually start to lose our initial dislike for her and then, just as we’re getting used to her, learn a bit more about her, making her more interesting and relatable than before. And to be honest, I’m glad they replaced Ashley with a person who, by definition, could never have the exact same dynamics with the other characters as Ashley did. She has her own identity and relationships. And it’s also just great to see an Indian woman play a regular character on a TV show, because this happens all too rarely, and the fact that her character is so refreshingly non-stereotypical (and this actually becomes a key character point in “Kali”) makes her all the more awesome. 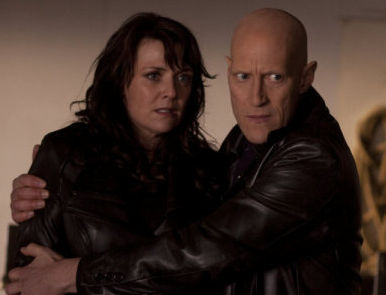 Other season highlights include the fantastic, comic-book-inspired, “Hero,” in which a chubby guy, played by Chris Gauthier (Eureka‘s Vincent) becomes a superhero, thanks to a most unusual Abnormal; “Next Tuesday,” another two-person play in which Magnus and Will are trapped alone, this time after their helicopter crashes; and “Haunted,” in which we finally learn the truth behind how John Druitt became Jack the Ripper. And after being dissatisfied with the lack of information surrounding his transformation in the first season, I was ecstatic to finally get an explanation and one that actually made a great deal of sense, namely that the Ripper side of him was actually under the influence of some sort of energy demon that latched onto Druitt when he first began to teleport–which explains why electroshock therapy can temporarily keep his dark side at bay and also acts as a metaphor for this sort of mental disorder, like the Dark Passenger that the serial killer Dexter Morgan describes as being the bloodthirsty part of himself in the Dexter novels and TV show. I also just adore that Sanctuary provides a steampunk explanation for the emergence of the Victorian era’s most notorious killer, as well as the irony that it is grief over Ashley’s death that inspires Druitt to fall victim to the influence of the Ripper again.

And this all culminates in the truly sublime season finale, “Kali,” in which we get the wonderful Callum Blue (Mason in Dead Like Me) as a villain trying to control the world’s most powerful Abnormal, literally earthshaking events, and an unexpected Bollywood number that, even more unexpectedly, isn’t only brilliantly depicted but shows more respect for Indian culture (along with the rest of the depiction of Mumbai) than I might have ever seen in an American production. It manages to present elements of Indian mythology and culture into its plot without a whiff of acculturation or Otherness, which is highly impressive, to say the least. And it ends on a cliffhanger so nailbitingly intense, it’s a minor miracle I was able to stop myself long enough to write up this post before plunging into the next season. See ya on the other side of Season 3, folks!