[Note: The following review contains major spoilers for Sanctuary, Season 2. You might want to not read, if you haven’t seen the series.]

Sanctuary‘s second season picks up six weeks after the first season left off and hits the ground running with “End of Nights,” a genuinely epic two-parter that, when taken together with the two episodes that made up the previous season finale, creates a stunning arc. And given that the very next episode, the heartbreaking “Eulogy” follows up immediately on “End of Nights”‘ powerful and effectively abrupt conclusion, the show has never before this point felt as densely, breathlessly serialized as it does there. 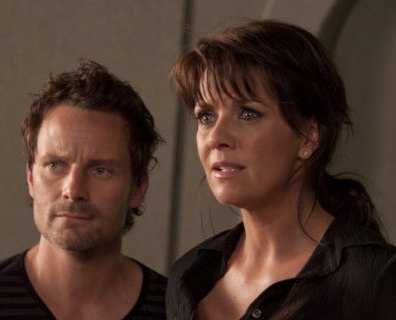 Interestingly, though, I am of two minds about this second season as a whole. On the one hand, the character writing is stronger in many ways and most of the standalones even better than the best of the first season, particularly because most of them either spring directly from character, have significant things to say about the characters, or follow up on character arcs from the previous season, often providing illuminating revelations that bring further depth to these people. On the other hand, after the non-stop, runaway train that is the climax and culmination of the Cabal arc, the show doesn’t introduce another central serialized arc until the end of the season. And while I do find the fact that the writers decided to definitively wrap up the Cabal as a villain rather than have them remain a looming threat for the entirety of the show exceedingly praiseworthy, I did spend a great deal of the rest of the season missing the forward driving motion that the Cabal provided the show. To return to standalone episodes after such a stunning serialized run did feel a bit of a letdown. I also wish that Tesla had shown up a bit more often (even while appreciating that the show doesn’t overuse him).

Overall, however, yes, Sanctuary‘s second season is absolutely fantastic. I’ve read that, among the fandom, the writers’ decision to kill Ashley was a highly controversial one for which some people still haven’t forgiven the show, and I definitely missed her throughout the rest of the season (as was intended), but, at the same time, I don’t think I would change a thing in that regard, even though my heart breaks for Magnus whenever I think about it. This was an incredibly ballsy move and forever changes the rules of the show. Because we always expect that, when characters in sci-fi shows–particularly daughters of the protagonist–are brainwashed by villains into becoming evil themselves, they will be saved (When Dana Whitcomb told Ashley in “Revelations, Part II” that she would die, I never in a million years thought that it would actually happen. In retrospect, that scene is terribly sad, because it’s the last time Ashley is ever fully herself.). 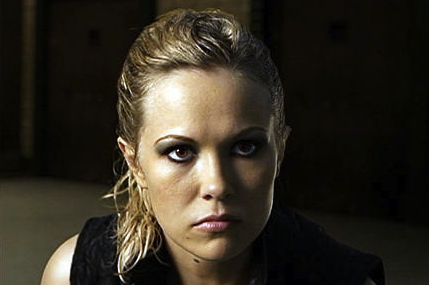 But the Sanctuary writers commendably refused to back down. It seems that the genetic experiments the Cabal performed on Ashley using the source blood were irreversible. And if these terrifying modifications weren’t technically irreversible, it would still have been impossible for Magnus to actually capture her in order to attempt to reverse them. The modified Ashley was simply too powerful to be contained. To begin with, the body horror of what the Cabal do to Ashley is truly horrifying (and the seemingly maternal but sociopathic doctor who “cares” for her deeply disturbing, given how warped her humanity has become), but when you then factor in its effect on Helen–the irony that the Cabal have converted Helen’s own daughter not only into an enemy but into an Abnormal (exactly what Helen has spent her life trying to save, not harm), using the same tool that Helen herself used in order to lengthen her life in the first place–it’s just devastating.

The writers do, however, allow Ashley the dignity of choosing the terms of her death at the end. Her own personality does resurface temporarily–not long enough to truly win against what has been done to her physically and psychologically, but long enough to sacrifice herself by forcing herself along with another hybrid into the EM Shield, thus saving her mother and likely thousands of others in the future who could have fallen victim to her and the other super soldiers. This theme of a character asserting their own humanity, even after having done horrible things, through self-sacrifice (or through attempted self-sacrifice) is a theme that recurs, in the episodes “Penance” and “Haunted”.