[Note: The following review contains spoilers for all aired episodes of Once Upon a Time, including the most recent, “Ariel”.] 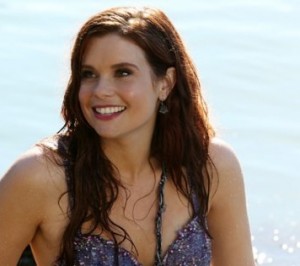 I had been anticipating this episode for an incredibly long time–ever since season 1, in fact, when Regina entered Rumple’s castle in “Skin Deep” and said to him, “I have a deal to discuss. A certain…mermaid.” And now, just under two years later, we finally get to learn the details of how Regina came to cross paths with Hans Christian Andersen’s famous tragic heroine, who also happens to be one of the most popular triumphant heroines in the Disney canon, and it was by no means a disappointment. It was actually my favorite episode of the season to date and could potentially eventually make its way to my all-time favorites of the series list, when all is said and done.

This episode delighted me for numerous reasons. For one, it dovetails smoothly with the continuity of that previous Ariel reference, explaining why Regina comes to assume the role of Ursula–which was significantly established in the first episode where we learned that Rumple was also the Beast. She clearly procured the magic bracelet from Rumple shortly after mocking him about Belle’s “death”. In the scene in this episode where she first spots the mermaid in her mirror, she’s even dressed in a similar costume, hair, and makeup to her get-up in that season 1 episode. (You have to fudge the details a little, since the timeframe established in this episode is that Regina hatched her plan the same night, and in the earlier episode, Regina meets with Rumple in daylight, and he refuses to do any deals that day out of mourning for Belle, but it’s not too difficult to handwave these sorts of minor issues, by imagining the earlier scene was set at a different time of day, and imagining that Regina came back a few moments later, in a more demanding stance, or possibly even snagged the bracelet while he was too distracted by his grief to realize.)

Furthermore, while we have learned elements of certain character backstories as part of other characters’ journeys, it has been a long time–perhaps since season 1–that a complete fairy tale has been given a full, from-the-ground-up Once Upon a Time rewrite. Now, in some ways, this is also clearly part of another character backstory, namely Snow and Regina’s, but Ariel and her goals are given central focus in a way that makes Snow feel more a player in her story, rather than the other way around. It occurs to me that this is also perhaps the best way to handle Snow-and-Regina-facing-off-against-each-other flashbacks from now on, given that there was a sameyness to the last episode to focus on their past struggles, “Lost Girl,” whereas this one feels fresh and exciting.

The Once writing staff also deserve a great deal of credit for crafting such an intelligent spin on the tale, paying honor to the Disney happy-ending version, the one which most people know today, while also weaving in crucial elements from Andersen’s sad original, ending up with a hybrid that holds surprises both for those viewers only aware of one version along with those who know both. For example, the concept of Ursula as not a villainous figure but a goddess prayed to by everyone in both the sea and local human kingdoms might throw many Disney fans for a loop, but it actually is more in line with Andersen’s story, where the “sea witch” wasn’t malicious but a completely morally neutral sorceress who granted the Little Mermaid’s wish, with no specific nefarious purposes of her own. The mermaid’s voice was simply the price she demanded of the girl, because it was the most valuable thing she could offer her, being the most beautiful in the world. And so she isn’t good per se, but neither is she evil.

Once cleverly conflates both the Disney and Andersen characters by having Regina masquerade as Ursula in order to trick Ariel, thus making the Ursula that Ariel meets a villain. (Speaking of which, has Lana Parrilla ever seemed to be having more fun on screen than when she got to sink her teeth into the Ursula role? No one seems to love playing deliciously camp evil like she does, and I love her fort it.) At the same time, when we finally meet the actual Ursula (voiced by Community‘s Yvette Nicole Brown), she is a terrifying, ineffable goddess who threatens Regina for having had the gall to impersonate her but at the same time does nothing to help Ariel’s plight. She’s not necessarily an evil figure. The fact that she is real implies that she is the one who provides mermaids with the magical ability to experience life on dry land once a year, the day of the highest tide, and is so mostly a beneficent goddess, but a goddess nonetheless who considers herself far above getting personally involved with the affairs of her worshipers.

And then there is the wonderful twist that the specific offer that “Ursula” has for Ariel to remain a human forever isn’t to give up her voice but to instead betray Snow, basically by swapping lower halves with her. Now, Regina cleverly frames it in such a way that Ariel could be convinced into thinking it isn’t a betrayal, that it’s for both of their own goods–after all, this way, Ariel gets her legs and her prince and Snow gets to escape from Regina for once and for all. But without asking Snow beforehand, it is of course a completely selfish act, claiming to know what’s best for Snow, without giving her a choice in how she wants to escape her own evil stepmother, in order for Ariel to get her own happy ending. This actually has a parallel in Andersen’s original story, albeit a much darker one in which, after the Little Mermaid’s prince marries another woman, the mermaid is given the choice to kill the prince in order to save her own life. In the original story, the mermaid won’t get her legs back if the prince doesn’t fall in love with her but will instead dissolve into sea foam, but murdering him will allow her to live out the rest of a human life. And although she considers it, having been heartbroken over his love of another woman, she ultimately decides she can’t do it and so instead dies, going to heaven, where she continues to watch over her beloved prince. Cheery, eh?