Depending on the day I’m asked, Thor might be my favorite Marvel film so far–though, to be honest, the same could be said for Iron Man, Captain America, or The Avengers, so it depends on my mood. But my first impulse is usually to say that it is my favorite, and it’s probably because of its flawless blend of high fantasy, mythology, grandiose Shakespearean epic, space opera–basically all of my favorite genres in one story. To be honest, I wasn’t hugely invested in the idea of the film when I first heard rumblings of it a few years ago–Thor is one of those comic book characters I never really got to know–but then I learned that Kenneth Branagh would be directing, and I was instantly sold. Kenneth Branagh? The Kenneth Branagh? Directing a comic book film. The juxtaposition is sheer insanity, and yet it also makes a bizarre, paradoxical sort of complete sense. 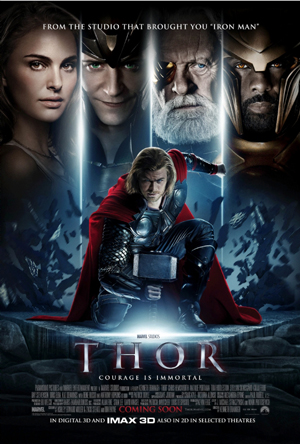 Thor is fairly unique in the comics world for being derived from actual mythology. Yes, he is that Thor–the Norse god of thunder–except that instead of floating in the clouds above us, like the popular conception of heaven, Asgard, the home of the gods, ruled by the almighty Odin All-father, is actually a different planet, in an entirely different solar system. Back when the superhuman rulers of Asgard were using their seemingly almighty magical power to save our “realm” from the mighty Frost Giants, the primitive Vikings naturally assumed them to be gods. And so, although, yes, Branagh is directing a comic book film, he is also directing one that has its roots in ancient mythology and specifically a story that focuses on the tumultuous relationship between a father and his sons. It has an operatic sweep, as well as an unexpected core of humanity and human emotion, comparable to Shakespeare, Branagh’s usual sandbox.

In short, with Thor, Branagh accomplishes the seemingly unaccomplishable, which is to produce a comic book film that manages to feel larger than its genre–the sections set on Asgard and Jotunheim are epic in a manner that feels like a cousin to Peter Jackson’s The Lord of the Rings rather than to Bryan Singer’s X-Men or Sam Raimi’s Spider-Man or even Jon Favreau’s Iron Man–while at the same time creating Earth-set scenes that fit comfortably in the Marvel Film Universe, stylistically, as well as characters who feel real–both those who derive from our planet and those who drive from another–which fits the Marvel Film Universe aesthetic, as well. Branagh directs at a brilliant pace that never flags, weaving in larger-than-life mythology befitting a fantasy epic, human drama, comic book and action film thrills, a love story, and a sharp sense of humor that manages to deflate any pomposity that might have otherwise threatened to rear its head, while also never going so far as to postmodernishly undercut the power of the story. But, come to think of it, this is what he achieves in his best Shakespeare productions–that blend of things that shouldn’t quite mesh but somehow do, the epic and the intensely insular. Branagh knows how to do grand that doesn’t descend into camp, as well as funny that enhances and underscores story and character rather than robbing from them.

The plot of the film centers around Thor being cast out by his father and sent to Earth, without his powers, as punishment for disobeying him. Naturally, there is a fair amount of fish-out-of-water comedy surrounding this Asgardian “god” having to cope with our modern-day world, technology, etc., and yet Branagh and head writer J. Michael Straczynski pull it off without making a crass mockery of him, which is a rather sizable achievement. The humor comes from the situation and the juxtaposition of the Asgardian and the Earthly, rather than at the complete cost of Thor’s dignity. Yes, he’s being knocked down a peg or two, but early on in the film, when he’s at his most pompous and hubristic, he deserves it. Meanwhile, Chris Hemsworth and Natalie Portman actually get us to care about their characters, the former superbly and convincingly portraying Thor’s delicate character arc from arrogant, impetuous youth and spurned son to humbler, worthier hero, and the latter also finding legitimacy and even a bit of depth in a role that could have been a simple love interest. Both of their character arcs–as well as their burgeoning romance–are actually quite subtly handled, which is saying a great deal for a comic book film that borrows liberally from Norse mythology–that least subtle of mythologies!–with a dash of Arthurian Legend thrown in for good measure.