In many ways, The Incredible Hulk is the  black sheep of the Marvel Cinematic Universe. Although it has a fun cameo ending appearance by Tony Stark and a few direct and oblique references to the other films in the series, it is certainly the slightest, narratively speaking. The film’s extremely thin plot, if you can even call it that, basically goes like this: Bruce Banner is in hiding, the American military finds him and attempts to hunt him down, Bruce Hulks out, Bruce eludes them, they continue to chase him, Bruce Hulks out, the military creates an even worse green creature with gamma radiation, Abomination, whilst in pursuit of Bruce, the military again captures Bruce, but then sets him free, allowing him to Hulk out and fight Abomination before running off himself. Oh, and there’s a bit about Bruce’s ex-girlfriend who’s still in love with him. That’s about it. 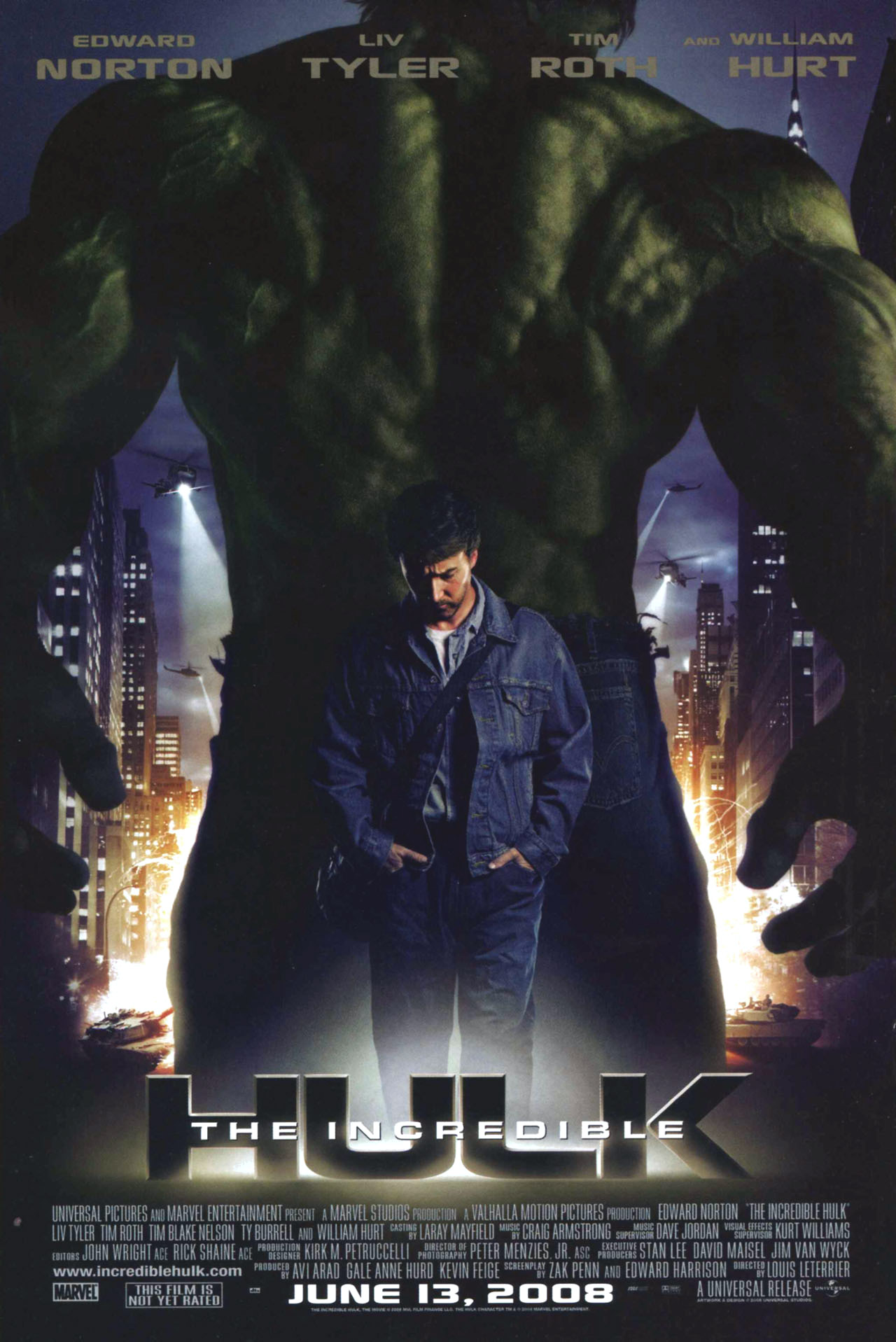 With that said, The Incredible Hulk is the best filmed version of the character up to that point–before, that is, this series’ own Avengers blew this film’s depiction out of the water. The old TV series was marred by the special effects of its time, and Ang Lee’s previous film by drawn-out melodrama and a seeming lack of interest on Lee’s part on the Hulk himself. This film, by comparison, is lean and tight, evidenced right off the bat by how, rather than rebooting from the beginning, it tells its origin story in the opening credits sequence, quick flashes of Banner’s first disastrous transformation telling us everything we need to know. The film is marked by that sort of briskness throughout. There may not be much to it, but, unlike the previous Hulk, it’s an entertaining ride that never gets bogged down in pop psychologizing. Unfortunately, it also never really concerns itself with any sort of meaningful character exploration. Ed Norton plays a character that he’s very good at playing from Fight Club–a seemingly low-key, innocuous individual who harbors a dangerous monster within him, constantly threatening to emerge. But, despite the fact that his girlfriend, Betty (Liv Tyler), asserts that some part of Bruce remains buried within the rage machine after he transforms, the film never goes that extra step in hinting that perhaps the rage machine isn’t only some sort of parasite that overwhelms and then takes over Bruce when his heart rate hits a certain level but is an intrinsic part of him, as well, like Tyler Durden was for Norton’s nameless protagonist in Fight Club.

The film does indicate that Bruce should learn to control the beast and his transformations but never goes so far as to indicate that, in many ways, Bruce Banner and the Hulk are essentially two sides of the same coin. And the problem with that is it leaves us with a fairly uninteresting protagonist who only gets interesting when he isn’t himself anymore. And even at that, he’s only interesting because he’s causing mindless mayhem, stomping around and smashing everything in sight. That’s the problem with an unintegrated Hulk, and also the problem with a film that focuses solely on the Hulk, because the actor playing him generally doesn’t get the character’s best moments, since during his best moments, he’s CGI, so you basically have a story driven by a protagonist who has to go away during the story’s climactic scenes. The Hulk works so well in The Avengers largely because the story doesn’t hinge on him or revolve around him, and Banner’s psychology can be explored through his relationships with the other superhero characters rather than as the central struggle at the heart of a film, because internal struggles are always difficult to dramatize, let alone internal struggles in what has to also be a comic book action extravaganza. Ang Lee’s Hulk tipped too far in the former direction; this one too far in the latter. Basically, Mark Ruffalo’s character in The Avengers is the Goldilocks of Bruce Banners, but more on that when we come to that film. It also helps that he has a sense of humor and genuine charisma. Norton has been charismatic in other films, but not so much here, where he’s basically a humorless victim.

Another problem with The Incredible Hulk is that, unlike all of the Marvel Cinematic Universe films that came after it, it didn’t seem to have been made with as definite a vision for the saga’s big picture, likely because that big picture hadn’t yet coalesced as it had by the time Iron Man 2 came out, which had the clear purpose of getting the puzzle pieces in place for the next three films. This is most clearly shown in the Tony Stark cameo, which in retrospect doesn’t make sense on its own. The first reason is that, as we see in Iron Man 2, Stark still hadn’t aligned himself with S.H.I.E.L.D. yet. This can be fixed by simply watching the film after Iron Man 2 and assuming that that is when the scene is meant to have taken place, and yet even with that, we have another problem, namely that it would seem that Tony Stark is trying to get Ross to enlist Abomination into the Avengers roster, which clearly doesn’t happen.