In keeping with this action-packed, 1940s-set pulp extravaganza, I’m going to cut right to the chase: Captain America: The First Avenger is a tightly and cleverly composed, superbly acted whiz-bang blast of old fashioned cinematic escapism that sits comfortably inside and takes full advantage of the Marvel filmverse canon while also managing to stand on its own as an enormously entertaining homage to both World War II films and the Golden Age of Comic Books. Having also directed Disney’s 1940s pop pastiche masterpiece, The Rocketeer, in 1991, director Joe Johnston is perfectly suited to the material, which demonstrates unending love for the cheesy, cheerfully jingoistic action-adventure serials of the time, even as it manages to surreptitiously tweak them, all whilst never losing its straight face. In the hands of the wrong writers and director, this film could have been irredeemably bad camp. Captain America succeeds because while its plot may be over-the-top, its characters and its meticulously realized world ring with authenticity and heart, something which it has in common with the majority of Marvel’s recent films, all of which are notable amongst the comic book film genre because each has its own distinct identity. Iron Man is a modern-day twist on superhero convention, Thor a fantasy epic, and Captain America a period piece.

And as a slice of history with fantastical elements, everything about Captain America is spot-on, from the World’s Fair-like Stark convention (just one of the beautifully handled links to the Marvel continuity) to the propagandalicious newsreels, advertisements, and USO shows (complete with a magnificent Alan Menken-penned theme song) to the styles and fashions of the day to the recreation of early-to-mid-twentieth century New York to the battle scenes to the occult Nazi pulpiness and retrofuturistic technology that seems practically steampunk today in its low-tech-high-tech awesomeness. Captain America, however, isn’t only an homage or a tribute to a simpler era when good and evil, right and wrong were more easily definable but a lovingly portrayed character study of a young man who refuses to let his weak, sickly physique get in the way of fighting for his beliefs. 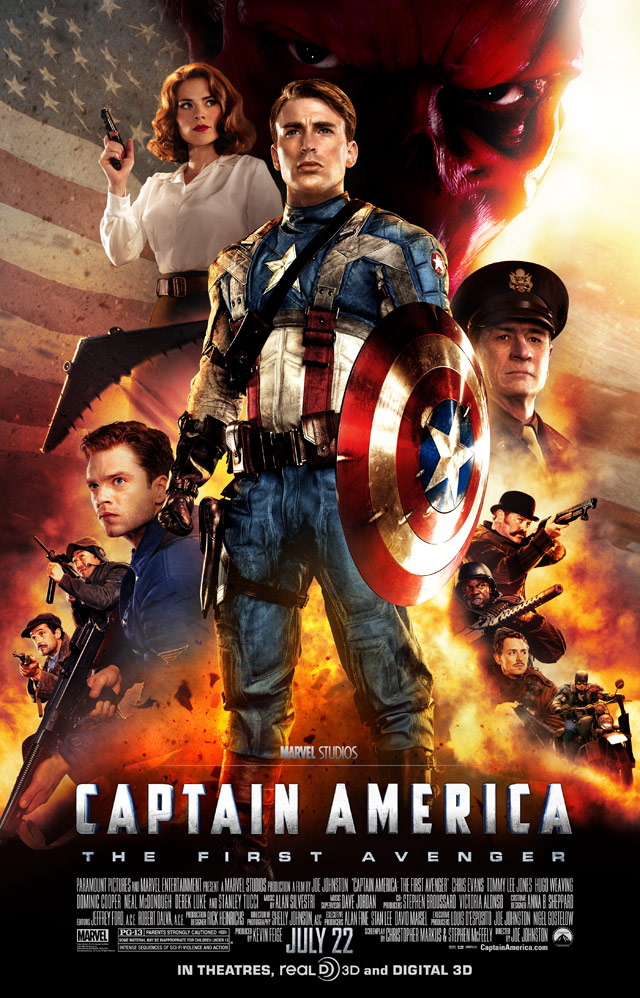 And what keeps the film from itself being American propaganda is that Steve Rogers (Chris Evans) doesn’t want to fight in order to spread the greatness that is America into Europe nor to take revenge on the Germans nor as a means of self-aggrandizement. Having spent his life being picked on and beaten up due to his small size and lack of physical prowess, he doesn’t see the Nazis as being any different than the bullies who have tormented him his entire life, and he simply wants to stop them from victimizing people as he has been victimized all of these years. Of note is that, even upon first meeting him, he shows no contempt for Dr. Abraham Erskine (Stanley Tucci), a German scientist who comes to grant him a new, unique lease on life and to be a mentor to him. The film makes a point of giving Erskine a line in which he says that most people forget that the first people the Nazis attacked were Germans. Again, Steve’s beef isn’t with Germany but with the small-minded bullies currently running that country.

In another smart move, Captain America self-deprecatingly pokes fun at the sort of jingoism that the character originally represented when he was first introduced in the 1940s. It does this by having the US government initially use him as a celebrity spokesperson to get people to buy war bonds and enlist in the armed forces. He appears in films and even a tie-in comic book (a wonderfully meta move). And although the crowds and kidlets love him to pieces, the guys actually fighting in the war consider him an empty-headed joke and mock him viciously, just as he has always been viciously mocked for different reasons, before he finally proves himself. We empathize with Steve throughout because underneath that newly muscled, smiling, confident, celebrity facade, we recognize the gawky underdog who was just as brave and headstrong when he was a scrawny runt. In American films, we’re usually taught to assume that people who look like Steve Rogers does at the start are cowards or wimps. Captain America is practically revolutionary in its refusal to accept that. The reason Steve’s transition into his new body seems mostly seamless (he doesn’t take a long time to acclimate and is instead off chasing bad guys immediately) is because once he becomes Captain America, he finally has the heroic musculature and frame he was always meant to have. In other words, his body finally matches his perception of himself. One could even read a metaphor for transgenderism in there, if one were so inclined.

Chris Evans does a truly phenomenal job navigating the role from his relatively meager beginnings to his ultimate climax, but throughout, always keeping him emotionally grounded. The film also accomplishes this through the relationships Steve forms with various people in his life, who continually remind him of where he came from: the aforementioned Erskine, who Stanley Tucci brings to life with warmth and wisdom, Bucky (Sebastian Stan), Steve’s best friend who at first is like a big brother to him, the dashing soldier he always wanted to emulate, and with whom he eventually swaps roles, taking on the role of big brother to Bucky himself, and Peggy Carter (Hayley Atwell), a charismatic, strong, young British officer who Steve meets shortly before being injected with the serum and with whom he falls in love.