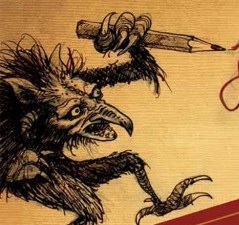 Labyrinth is one of my all-time favorite Jim Henson productions. I have gone on about it at length in the past. That is why I was particularly excited when I found out that the Archaia Company would be re-releasing a special edition of the novelization written by A. C. H. Smith that accompanied the film’s original release, along with subsequent new editions of the The Dark Crystal and The Storyteller novels.

Now, practically every film comes with these media tie-in books, and the majority of them probably aren’t worth reading, but what distinguishes these particular novelizations is that they were overseen by Jim Henson himself. He saw them as an opportunity to expand on the worlds of his fantasy films and show, adding further background worldbuilding details that he couldn’t convey on screen, as well as sequences that either he couldn’t quite get to work or for which he didn’t have the budgetary resources. And so, although the novel was technically written by Smith, Henson himself read every draft (a rarity among movie novelizations, if not completely unprecedented), sending him copious notes and suggestions in order to mold it into a definitive written adaptation of his film.

And even today, that love and attention to detail really shows. Much like the film itself, it has aged beautifully. Smith’s prose has a heightened, timeless, fairy tale feel, as does Henson’s film, which keeps it from feeling mired in the 1980s, as I’m sure many novelizations from the time are. Since Labyrinth is a dreamscape, Smith and Henson don’t try to overexplain the world, as that would decrease its sense of mystery and wonder (my guess is that The Dark Crystal novel–which is coming out in June and I’ll be reviewing then–allowed for much more mythology enhancement, much like Tolkien’s Lord of the Rings prologues and appendices), but the ability to be inside Sarah’s head (and, at times, Jareth’s) for nearly the entirety of the journey adds a new, rich layer to her character psychology and the proceedings.

We get to understand her even better, particularly through learning about her relationship with her mother, whose actress lifestyle has taken her away from Sarah, a detail only hinted at in the film via press clippings with which she has adorned her mirror. Sarah’s attitude towards her father, stepmother, and half-brother are drawn into even deeper relief, when we realize that Sarah hero-worships her glamourous mom, unknowingly turning her subconscious resentment of her mother’s emotional abandonment of her back on her dad and his new family, blaming them for something they didn’t cause.

In many ways, with her heightened sense of drama and theatrics, she is attempting to emulate her mother–who has become a figure of fantastical flawlessness to her–and distance herself further from her current life. And so Sarah’s journey of self-discovery and growing up becomes not just about putting aside her complete reliance on childhood things–though never fully abandoning them–but also about letting go of her tight grasp on a past that she can’t ever reclaim and which was never as perfect as she had remembered.

Smith also does a marvelous job of capturing the film’s best scenes in prose form. There were some that I was expecting to lack a certain power on the page, particularly the breathtaking ballroom sequence, which seemed to be so reliant on David Bowie’s mesmerizing music, the captivating masks and costumes, and all of the dreamy visuals, yet he manages to conjure it up beautifully, adding further details to the Gothic, decaying glory of the bubble/mirror palace, and particularly to the red-hot seductive allure of Jareth that runs through Sarah like an electric charge. Some of the prose in this section was so beautiful, I found myself reading it out loud.

But the text of the novel alone isn’t the only reason to purchase this collector’s edition, which also comes with pages upon pages of fantasy illustrator Brian Froud’s goblin sketches (he was the conceptual and costume designer for the film), and although many of his goblin drawings had made their way into a book called The Goblins of Labyrinth, none of the ones in this volume had been published before now, having been locked away in the Henson archives up to this point.

The most exciting part of the book, though, is probably the 50 pages of Jim Henson’s hand-written notes that he jotted down on paper while first brainstorming ideas that would eventually evolve into Labyrinth. Not only is it fascinating to see the what-if scenarios of what the film might have been had he pursued some of the different directions of which he had first conceived, but the quality of the printing makes it a truly stunning experience. The pencil and pen scratches on the paper look so real, rather than reproduced (as do the ones on Froud’s sketches), that your brain instantly tricks you into thinking that you’re holding Henson’s actual physical notebook in your hands and not just a copy. This isn’t a mere xerox. The faded yellow of the paper, the lighter brown of the pencil, the deeper blue of the pen marks are all so accurately rendered that it feels like clutching a historical document in your hands. And that level of tactile intimacy with the by-hand work of such an important, creative genius as Jim Henson creates a near-religious sense of awe, if you’re as huge a fan as I am.

And if you are, this book is a must-own.