[Note: The following review contains NO spoilers for How to Train Your Dragon 2, although it does have spoilers for the first film in the series.] 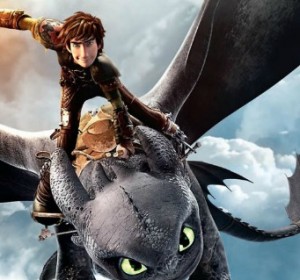 “How to Train Your Dragon 2”

When I first saw the original How to Train Your Dragon 4 years ago, it instantly became one of my favorite animated films of all time, and my admiration for it has only grown with each successive viewing. Based on a series of children’s novels by Cressida Cowell, it is the rare non-Disney/Pixar CGI film that I find deeply, even profoundly moving (I’ve yet to watch it without bursting into tears at least once), as well as truly exhilarating, funny, richly imagined and realized, and successful on every conceivable level.

On the surface, it’s guided by an absolutely magnificent and original concept of an alternate history–or, more likely, secondary world–in which goodly Vikings living in a small community called Berk find themselves under attack on a regular basis by dragons of all sorts, sizes, and shapes, this latter point being the best part. The world of this series is populated by more than a bestiary’s worth of dragons: large dragons of the more traditional design, two-headed dragons, smallish, fat dragons that resemble bumblebees, dragons enormous beyond reason, relatively tiny dragons that wing around like small birds or flies, dragons that shoot spikes, black dragons that look and behave like reptilian cats with wings, the major uniting factor being that they all begin the film as the Vikings’ mortal enemies, until one day when a scrawny kid unfortunately named Hiccup, who has never been able to live up to his warrior chieftain dad’s concept of powerful masculinity, attempts to shoot down a dragon in order to impress him but finds himself incapable of finishing it off, soon afterwards realizing that he had dreadfully injured the poor beast. In the fall, the dragon–who he names Toothless due to his retractable teeth–lost a crucial piece of his tail, rendering him incapable of flight. Soon afterwards, Hiccup compassionately constructs a new half-tail for him out of leather, and in the process forges a beautiful friendship that literally changes the world and how all of the other Vikings come to see dragons, forever.

And this is where the film’s deeper elements come into play. Like Jim Henson’s Fraggle Rock, How to Train Your Dragon is a truly empathetic story about how (seemingly) vastly divergent species living in the same environment come to learn about and relate to one another by seeing past their differences to their underlying commonalities. The reason Hiccup  becomes a “dragon whisperer” of sorts is because he is the first Viking who is able to put aside his initial prejudices against these outwardly monstrous creatures and attempt to understand them, coming as close as a human can to “speaking their language”. By doing so, he is eventually able to create peace between the species. Furthermore, the species come to enrich one another’s lives, Hiccup helping the dragons defeat their tyrannical ruler, and Toothless and the other dragons giving Hiccup and, later, the other Vikings the gift of flight.

The film’s most remarkable feat, however, might be how it manages to impart this lesson in such a deeply personal way. The major reason its message never feels overly simplistic or didactic is due to the genuinely touching relationship between Hiccup and Toothless, which gradually evolves from two very different creatures attempting to reach out to one another into a complex symbiotic partnership that is one of the most heartsearingly sublime portraits of friendship–not only between human and animal but between any two characters, period–I have ever seen on film, which makes this otherwise universal tale intimate and specific at the same time. And when Hiccup loses a leg in the ending battle, the two come to have even more in common, Hiccup’s new iron leg that interlocks with Toothless’ saddle and the gears that operate his tail a perfect symbol of their inextricable, empathetic friendship. It makes so much sense that it was written and directed by Chris Sanders and Dean DeBlois, the writing/directing team of Lilo and Stitch, another animated film with surprisingly complex emotions and richly depicted and lived-in relationships.

Needless to say, How to Train Your Dragon 2–which was written and directed by DeBlois alone–had a great deal to live up to. And even given that, it managed to exceed my expectations in every way that matters. It is everything that the first film was and more, drawing on the character threads, emotions, and world of How to Train Your Dragon, and seamlessly, marvelously expanding upon them. The scope is magnificently bigger this time around, not only in the sense of the battles, the breathtaking flying sequences, and other action set pieces of this film being even more epic and larger scale than in its predecessor but in terms of the worldbuilding, which is now even more complex. No longer are we narratively limited to Berk. Set 5 years after the events of 1, the outside world–which we learn has continued to be less friendly to dragons that the relatively newly enlightened citizens of Berk–starts to infringe on their sheltered, idyllic environment, and Hiccup begins to encounter people even less willing to listen to his wisdom and point-of-view than his dad, Stoick, initially was. Furthermore, through this adventure, Hiccup also comes to learn more about dragons, as well as his own past and family history, which intersects with dragons in ways he had never expected.

What is particularly impressive about how the film handles all of these revelations is that they manage to broaden the mythic scope of both Hicccup’s personal bildungsroman as well as the series’ universe while at the same time not undermining the power of the first film. For example, although it had initially seemed that Hiccup was the first person to ever ride a dragon, we learn that that’s actually not the case, and yet the sequel manages to not rob him of his achievements by using these reveals to further strengthen his affinity with dragons on multiple levels and additionally justifies these narrative decisions by thematically paralleling Hiccup with new characters, both evil and good, one of whom is a dark mirror to Hiccup, and the other of whom is a shining beacon of hope to him (while even explaining Stoick’s earlier fear of dragons even further). Hiccup’s journey of self-discovery reveals that the world may not be as simple as he had thought, and yet these new truths he learns over the course of this story help him grow into the leader his father desperately wants him to be.

As with the first film, this is a story of bravery, friendship, and sacrifice that contains triumphs as well as shattering personal losses, all of which forever change all of the characters–no concessions or condescensions are made for this technically being a children’s film; at times, this film hurts, and, yes, it can be scary–and just as with the first film, at its heart, it’s rooted in complex, completely naturalistic emotions. These characters feel more real than many non-fantasy characters in “grown-up films,” and their quiet moments together are no less thrilling than the film’s more sweeping action scenarios, and particularly in its blissful and awe-inspiring climax, its epic and intimate sides unite as one with an indescribably satisfying turn of events that pays off every thematic, character, and plot thread from the entire saga up to that point and sets the stage for what is sure to be a brilliant third entry in the trilogy. I was also impressed by how thoroughly unpredictable it is. I didn’t see any of the twists coming, nor how the characters would emerge from the very dire, high-stakes situation into which the plot thrusts them–which is much more than I can say for most action films, let alone family animated features–and yet in retrospect, it all makes perfect emotional sense.

Often when sequels attempt to “go bigger” than the originals, they fail by mindlessly adding MORE without care or thought. How to Train Your Dragon 2 demonstrates how to do more correctly, by returning to the source material, carefully examining all of the narrative threads, and working outwards from there so that none of the expansions feel gratuitous but are all instead the natural outgrowth both of the characters’ continued maturation and newly shared experiences. And no matter how big the saga gets, it is still primarily the sweet story of the remarkable, lasting friendship between a boy–well, a young man now–and his dragon, and that doesn’t seem likely to ever change. Toothless remains one of the most wonderful animated creations in film history, the often subtle visual and auditory work conveying so much personality that one can easily forget that he isn’t a real, living creature.

Speaking of which, I also must mention the superb voice actors–particularly Jay Baruchel, who continues to be the perfect Hiccup, making him a thoroughly unique fantasy hero, and Craig Ferguson as the delightfully eccentric Gobber–as well as the absolutely astounding 3D. Unlike many recent examples of the format, this film takes full advantage of the technology, using it both to add a stunning amount of visual depth to the picture, drawing attention to details that otherwise might have gone unnoticed, while also allowing the viewer to feel every swoop, lift, and drop of the dragons’ wings, making us feel momentarily as if we are up there, riding on their backs along with Hiccup and his friends. I can’t remember the last time that 3D has felt so magical and genuinely transporting, truly and significantly enhancing the cinematic experience.

Don’t wait for DVD or Blu-ray. This one really needs to be seen on the big screen.

Purchase How to Train Your Dragon on Blu-ray/DVD