The great Maggie Smith is simply superb as the aged Wendy (and it’s so strange to think of how long ago now she played this character, although she was also much younger than Wendy was supposed to be at the time; it’s also shocking to realize the sad fact that she ended up outliving her Peter Pan, Robin Williams). She manages to pack those two first words alone with so many layers of meaning. In her voice, you can sense yearning for who Peter once was, heartbreak that he no longer remembers, and, later, disappointment at how cold and hard he has become. When she hears about what a cutthroat lawyer he now is, she says, both stunned and wounded, and, again, with perfect delivery, “Peter, you’ve become a pirate.” The beauty of Granny Wendy, as a character, is that, although as a young girl, she had chosen to give up the chance at eternal youth in order to instead experience life naturally, in her old age, she has come to appreciate the wonders of Neverland in a way she never could when she was still a child herself. Although she would never have chosen to turn back time and stay a girl forever, she still holds onto her childhood memories, and the fact that Peter hasn’t truly pains her. In the Doctor Who episode, “Forest of the Dead,” River Song says of the Doctor, “You know when you see a photograph of someone you know, but it’s from years before you knew them, and it’s like they’re not quite finished? They’re not done yet. Well, yes, the Doctor’s here. He came when I called, just like he always does. But not my Doctor.” Wendy is experiencing that in reverse. She looks at Peter and sees the boy he was, but he can’t really recognize her.

But shortly thereafter, he is forced into confronting uncomfortable truths about himself when Captain Hook travels from Neverland to London and kidnaps Peter’s children in a bid to lure him back so that he can finally have one last confrontation with him. And although Peter doesn’t initially believe Wendy, it’s difficult to deny it when Tinkerbell (Julia Roberts, in a literal pixie cut) shortly thereafter appears in the nursery and whisks him off to his old stomping grounds. He still, however, feels no connection between who he is now and the wonderful boy everyone keeps telling him he once was. He’s even too timid and afraid to risk life and limb to save his kids. And so the arc of the film is basically about how middle-aged Peter eventually comes to get his groove back, detailing the gradual process by which Tink and the Lost Boys help to triumphantly reawaken the Pan within, and I don’t believe there is a person on the planet who was more perfectly suited to the role than Robin Williams. I don’t think he ever got enough credit for his dramatic range, which here enabled him to be completely convincing as a monumentally uncool, uptight, stuffed shirt of a lawyer, and to then slowly but surely begin to weave tentative echoes of the youthfulness his character had long since forgotten into his performance, so that by the time he finally reaches his epiphany and becomes Peter Pan, the spirit of childhood, once more, it feels like a cathartic burst of pure energy and life. That brilliant scene in which he finally remembers his past and literally takes flight, reveling in the wonder and the magic of it all is the major reason I felt drawn to the film that night. What better celebration of Robin Williams’ life than this joyful sequence in which a grown man puts aside his adultish things and plays?

The magic of Robin Williams is that he could tap into the manic, unfettered energy of a child, bouncing against the walls, but a moment later convey a sense of paternal warmth and reassurance. And in Hook, he does both at the same time, Peter eventually showing a side to his kids that they’ve never seen before, but also not losing his adult self within the Pan persona. The most ingenious part of his epiphany sequence is that, after the gorgeous, evocative, bittersweet, fantastical sequence of memories surrounding his original arrival in Neverland–the moment in which his carriage spins away from his mother in the park is storybook lovely, eerie, and sad all at once–and then the depiction of the circumstances that led to his choosing to return to Earth (all of which, up until that last decision, come straight out of the book; incidentally, younger adult Wendy is played by a young Gwyneth Paltrow), what actually restores his ability to fly isn’t any of those memories but instead that of the moment he became a father. That and not Neverland is his happy thought. Ironically, in what many people write off as one of Spielberg’s most childish, inconsequential films, he actually has his protagonist behave with greater maturity than in some of his earlier, more classic works. Close Encounters of the Third Kind culminates with a harangued father and husband escaping his wife and children, without a moment’s hesitation, when he’s given the opportunity to travel the stars with alien visitors to Earth. (Similarly, E.T. paints the majority of adults in an overwhelmingly dark, critical light.) Conversely, Peter Banning doesn’t want to escape his family. Instead, he draws on the experiences of his childhood, finally remembering all over again what it is to run and laugh and play, so that he can emerge from the experience a better father and husband. And that fits Robin Williams to a tee.

Meanwhile, Dustin Hoffman and Bob Hoskins (the latter of whom also sadly passed this year) also give pitch-perfect performances as the eponymous captain and his first mate, Mr. Smee, respectively. Of all of the Hooks and Smees I’ve seen on film, I actually consider them both to be the definitive performances of the characters. Hoffman gives Hook just the right mix of theatrical grandeur (with a generous dollop of camp), humor, and genuine menace, and Hoskins similarly makes Smee a hilarious, perfectly obsequious toady but also someone who we can believe truly delights in being nasty. And even if Julia Roberts’ Tinkerbell might be the relatively weakest link, I’ve always thought she got a bit of a bad rap for it. While she might be the closest thing the film comes to stunt casting (unless you count Glenn Close’s delightfully odd and dark cameo as a male, bearded pirate who gets thrown into a trunk with a bunch of scorpions as punishment for doubting Hook), she does a fairly good job, particularly in conveying Tink’s longing for Peter and her heartbreak at knowing he’ll never stay with her.

Furthermore, I have always loved the look of the film. I have read articles that compared it to Terry Gilliam, and I definitely agree with that. Visually and atmospherically, this Neverland could have easily appeared in The Adventures of Baron Munchausen or Time Bandits. And overall, due to that fairy tale atmosphere, the film has aged very well, but it does betray its early-90s-ness when it comes to the Lost Boys, none of whom feel like the sort of turn-of-the-20th-century English moppets you would expect from Peter Pan. They feel like American kids from the 90s, in terms of their overall spirit, their slang, and their dated skateboarding. Now, some of this could be explained by an influx of new children into Neverland. This is certainly the case with the new leader, Rufio, who seems to have brought with him some of these newer influences. However, the majority of kids–or at least the ones with speaking roles–remember Peter Pan from before and so probably shouldn’t feel quite so contemporary.

Some have pointed to the multiracial casting as feeling too “PC” or “United Colors of Benetton,” which I completely reject. There’s no reason that Neverland, even back then, should have been restricted to white children. The issue is that they don’t feel like immortal children but like kids who had just run away from their parents fairly recently. I understand the impulse to make the boys feel relatable to the early-90s child audience, but that is the one aspect that feels a bit jarring today, because it has dated where the rest of the film has managed to remain timeless. That issue aside, Robin Williams is so wonderful with the boys that he is able to convey a very real connection with some of the in only a few short scenes, particularly the smallest, a shy African-American boy who believes in Peter Pan more than anyone else and who melts my heart every time I see it.

In the end, Hook is the story of a man who learns how to really live, and given the legacy of laughter and humanity Williams has left us with, a film that ends with him changing Pan’s original line, “To die would be an awfully big adventure” to “To live would be an awfully big adventure…” and Tootles, an old man who was once a Lost Boy but who kept Neverland in his heart all of these years, flying back to that magical realm to live forever, proved to be the perfect balm to a very dark day. 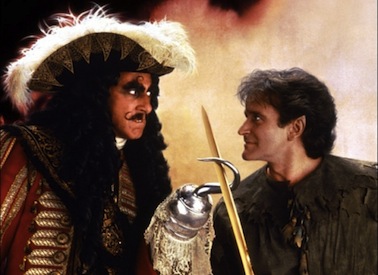