There are few things in life that delight me as much as a thoroughly, gleefully geeky project, carried out in that uniquely geeky manner whereby references to geek culture–particularly the films and comic books and television shows and games geeks grew up imbibing–are tweaked and satirized, even as one can tell that, at their heart, the jokes come from a place of love and even reverence. In many ways, Scott Pilgrim vs. the World is the ultimate geek film. Based on a series of graphic novels by Bryan Lee O’Malley, Scott Pilgrim is an indie rock/comic book/video game saga in which a young, Canadian bass player, while dating a teenage girl named Knives Chau, falls for Ramona Flowers, a cool American girl with funky hair, but discovers that in order to become her boyfriend, he will first have to vanquish her Seven Evil Exes™ in combat, each battle of which is presented in the style of a mid-1980s/early-1990s era console game. In classic Nintendo speak, she is Princess Toadstool and each of her exes a different Koopa that Scott has to defeat, leading up to the Boss Battle.

Although the plot itself is extremely fun–a sort of Hero’s Journey for Generation Y-ers who grew up glued to their television screens, plugged into their game systems, devouring their comic books, and blasting garage rock through the headphones of their Discmans–what makes the film truly electric is the manner in which that plot is presented. Scott Pilgrim exists in a universe that at first seems to be fairly mundane until the film proceeds and we learn that it is a place where a high school bad boy can literally punch a hole into the moon, or Veganism can give people superpowers, or the loser of a fight will always explode into a pile of coins, as if these characters have spent so much time living inside the inner worlds of their comic books and video games that it begins to alter the world around them. 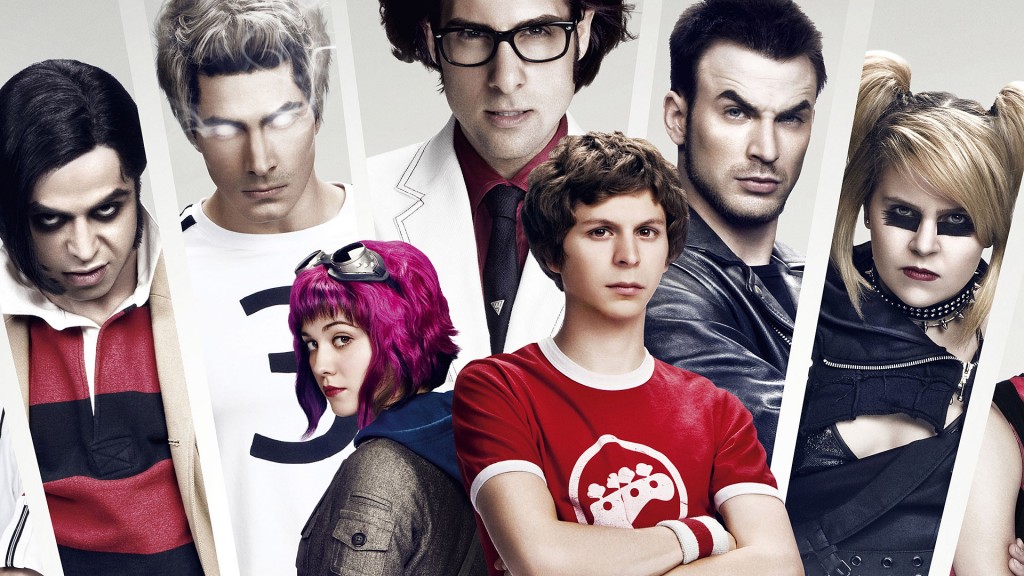 Many movies try to translate the aura and energy of a comic book into the filmic medium, and yet very few, if any, are as successful as Scott Pilgrim. It isn’t only the fact that director Edgar Wright frames most of the shots like the panels of a comic–although that helps a great deal, other films have done similar things–or that everything from a phone ringing to music playing to a fist punching is visually illustrated by text floating across the screen: “RIIIIIIING!,” “POW!,” “KAZAAM!” a la a comic book or the 1960s Batman TV series. It’s also the camera moves, the flawlessly fluid, often rapid-fire manner with which the film transitions from “panel” to “panel,” as if our eyes are scanning the page of a graphic novel, or as if all of the separate panels have been assembled into the world’s largest flipbook, and how different title cards and text bubbles frequently pop up on screen to do everything from providing exposition to listing character “stats.”

Additionally, the film doesn’t content itself with simply being a live-action comic book, but also a live-action video game, with many of the scenes specifically parodying and referencing various video game conventions, from Power-Ups to 1-Ups to magic swords to status bars to the aforementioned coins to electronic video game music and sounds to cut scenes (done in a wider screen ratio than the other scenes), as well as specific games, from Super Mario Bros. to Mortal Kombat to Donkey Kong. The film also experiments with various other styles, often copycatting famous movie shots, one time presenting a Bollywoodesque musical number, and in one extremely clever scene, temporarily transforming into an old-fashioned sitcom, complete with manic laugh track, all of which manages to imbue the film with a deliberately raw, anything-can-happen vibe perfectly suited to its status as a pseudo-indie production about indie rockers, based on an indie comic. This might be the most thrillingly, successfully experimental film I’ve seen since (500) Days of Summer. 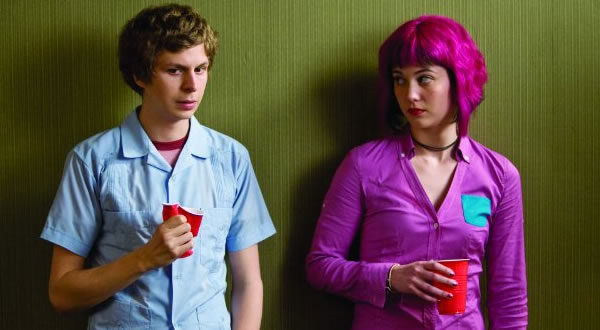 Michael Cera is basically just playing Michael Cera, the gawky, wide-eyed, emotionally immature Everyman, but his unique Michael Cera-ness is precisely suited to this part. The incredibly intelligent screenplay, written by Michael Bacall and Edgar Wright, is filled with dialogue (which I can only imagine is true to the spirit of the book) that rides a fine line between both capturing and mocking slacker-speak, liberally peppered with lots of unnecessary “and stuff”s, and Cera delivers these lines with simple grace, in a completely deadpan voice that never obviously winks at the audience even though we know he is in on the joke. This is because Scott, the character, is not, and Cera ensures that although Scott exists in a satirical world, the character is never anything less than fully authentic to himself. Meanwhile, Mary Elizabeth Winstead is wonderful as Ramona Flowers, rocking the disaffected, aloof girl with blue highlights in her hair thing. She has a mysterious, luminous quality that makes it clear why Scott is so intrigued by and then enamored of her, while also giving us the sense that he will never be able to grasp her completely.

The film, however, is practically stolen by Kieran Culkin as Wallace, Scott Pilgrim’s awesome gay roommate. What makes Wallace awesome? It could be his utter lack of a single stereotypically defining gay quality, either in the way he speaks, behaves, or dresses. It could be his straightforward cool, his ability to get practically any guy in bed he wants, whether gay or ostensibly straight, without any overt seduction tactics. He just simply exudes that irresistible, undefinable, effortless it factor. He knows he’s amazing, but at the same time, couldn’t care less. Culkin’s performance is awe-inspiring in how devoid it is of anything resembling the traits of any young “gay best friend” character we usually see in mainstream cinema. He’s just an awesome guy who’s into other guys (none of whom are as awesome as him, but who can be, really?). Also impressively, not only does Wallace get action, the film doesn’t shy away from showing us some of that action. No, not sex scenes, but he gets nearly as much make-out time on screen as Scott does. 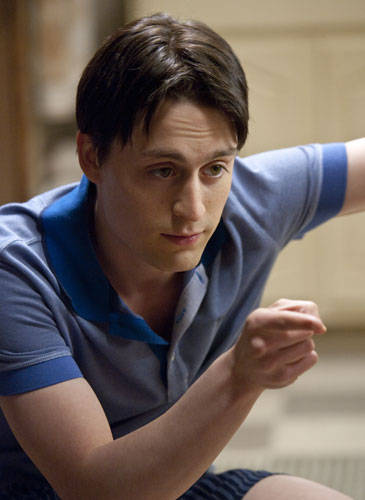 Incidentally, what with this film and Nick and Norah’s Infinite Playlist, Michael Cera is becoming possibly the most gay-friendly young actor in Hollywood. In that film, he was the only straight member of an otherwise all-queer band, and in Scott Pilgrim, he not only is roommate to a gay friend but non-euphemistically shares a literal bed with him. Michael Cera, Kieran Culkin, and everyone involved in this film, I salute you for promoting such a positive representation not only of gay people on film (and non-asexual gay people on film, to boot) but of straight people having gay-panicless friendships with gay people on film. Refreshing, indeed.

Scott Pilgrim vs. the World is basically the whole package–a movie for the geeky kid inside every one of us, a movie as outrageously funny as it is genuinely smart, a movie whose world is as meticulously crafted as it is freewheelingly inventive, and whose pacing remains smooth and brisk throughout, in large part helped by the seven goals that Scott must reach throughout the film.  In other words, the Seven Evil Exes™, all of whom bring delightfully demented panache to their roles, including Fantastic 4‘s Chris Evans, Superman Returns and Chuck’s Brandon Routh, Rushmore’s Jason Schwartzman, and Parenthood’s Mae Whitman, and all of whom get to deliver fiendishly hilarious lines that parody the stiffest of Golden Age comic book dialogue crossed with the silliest B-movie of all time. That’s just the way Scott Pilgrim rolls. It’s a deeply silly satire of some deeply silly material, that happens to be done with surprising wit, intelligence, and warmth. It’s not often that camp and sincerity are blended with such dexterity and style.