From the Earth to the Moon…by Train

Home » Present Future » From the Earth to the Moon…by Train

Hello! It is I, TomorrowLad! My mission–I have chosen to accept it already–is to bring you news of the Future. At least, the future that our present is building! Or could build. Or might build.

Aw, shucks. I’m just going to bring you cool news about what our future might be, based on the technological ideas and innovations of today.

To start things off, I thought we’d look at an invention that all sorts of science fiction writers have thought about, in various forms, from space elevator to railway to the moon! In this case, it’s StarTram, railway to space! 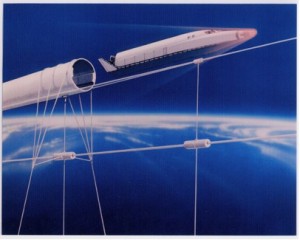 The train works by way of magnetic levitation. Magnetic. Levitation. How absolutely cool does that concept sound? In the words of the Great Wikipedia:

Magnetic levitation, maglev, or magnetic suspension is a method by which an object is suspended with no support other than magnetic fields.

Of course, there’s the small matter of engineering and several billion dollars to build the actual maglev launch system. But that’s a small price to pay for wicked cool, right?

So? Who’s up for hoppin’ on board the Space Train!?! Anyone? These guys seem ready…

You can read more about trains…in…spaaaaaaace here!