After continuing our journey with John Crichton last week with “Look at the Princess,” Part III and “Beware of Dog”, our Farscape re-watch continues this week with the fifteenth episode of Season 2. 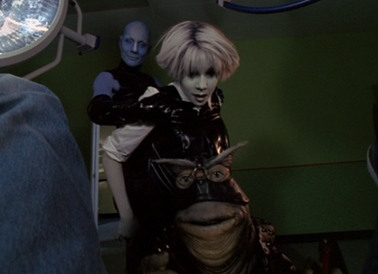 “Won’t Get Fooled Again” is one of my favorite episodes of Farscape. In fact, it might be my very favorite. No matter how many times I see it, there are always more details to notice and more layers to unpack. Farscape had the rare knack of being able to be both a commercial sci-fi property and a weird, arthouse project at the same time. The average episode would intertwine aspects of both so deftly that it was generally able to maintain a marketable, at least vaguely approachable exterior, but in certain, particularly bold episodes, the show would shed any interest in going for mass appeal and instead indulge in some of the most out-there, experimental filmmaking ever seen on a sci-fi show. It was able to do that sometimes because it didn’t do it all of the time.

What is also of crucial importance about an episode like “Won’t Get Fooled Again” is that it isn’t just weird for weirdness’ sake but fits perfectly into Crichton’s arc, specifically here delving into his rapidly deteriorating mental state and finally providing a solid answer–at least to the audience–as to its actual cause. It both takes stock of and advances the current state of John Crichton, and, like “Crackers Don’t Matter” alternates wacky humor with some deeply disturbing moments–sometimes both at the same time–for one of the most in-depth rides through a protagonist’s psyche/subconscious in television history. No other show could simultaneously pull off funny, freaky, whimsical, and dark quite like Farscape.

“Won’t Get Fooled Again,” like many other of Farscape‘s most brilliant, mindfrelling episodes, actually springs from a very basic concept: John Crichton wakes up in hospital on Earth and is told by the doctor that Farscape One had only recently crashed. He had sustained some injuries, and therefore everything that had happened to him in the Uncharted Territories were hallucinations brought on by his accident. Why, he had even incorporated his doctor, Bettina Fairchild–played by Claudia Black–into his “fantasy” of Aeryn Sun! Or so he is expected to believe. The trope of the character-from-a-seemingly-implausible-sci-fi/fantasy-universe-awakens-in-the-“real-world”-with-all-of-their-experiences-called-into-question has appeared on many genre shows, two of the most famous being Star Trek: The Next Generation‘s “Frame of Mind” and Buffy the Vampire Slayer‘s “Normal Again,” in which Commander William Riker and Slayer Buffy Summers, respectively, awaken in mental institutions. In each of these cases and many of the others, one of the most tantalizing aspects of the episode is that the protagonist actually starts to question the veracity of their memories. “Normal Again” even concludes with no definitive answer. Buffy chooses her life as a Slayer but, despite some clues, there’s no guarantee that this doesn’t mean she isn’t simply willfully succumbing to her delusions.

Farscape, on the other hand, cheekily turns the trope on its head by not only having John never question his Moya memories but by making it completely obvious to him from the start that this “reality” isn’t real, for soon after leaving the hospital, he begins to encounter each of his friends from the Uncharted Territories on “Earth,” each of them looking physically identical to how they do on Moya, albeit in Earth garb and acting as if they had never met him before and that everything about them is perfectly normal. Zhaan is a psychiatrist in a suit, but is still very much blue and bald. Rygel is in a business suit but is still the same slug he always was. Chiana is still grey, D’Argo is still tentacled, Scorpy still Nosferatuish and so on and so forth.

Just like the main arc of the series, “Won’t Get Fooled Again” references The Wizard of Oz, particularly the MGM film, numerous times, but here it is basically in reverse. Instead of Dorothy getting to Oz and finding analogue characters to all of her friends in Kansas, here “she” returns home and finds analogues of all of “her” friends from “Oz” (and here, of course, there’s also an embedded pun on the fact that just as John Crichton is a human in “Oz” aka the other end of the galaxy, so is Ben Browder an American in Oz, aka Australia), but looking the same as they did in the magical land–basically what would have happened if the Kansas farmhands in The Wizard of Oz had actually been dressed as the Scarecrow, Tin Man, and Cowardly Lion but acting as if they weren’t.

As the episode progresses, the situation also gets progressively crazier to the point that life aboard Moya seems more normal and stable than this, which is saying something. No, John never wonders whether this Earth might be real. He’s been fooled before in “A Human Reaction,” and the writers/directors wisely don’t bother trying to trick either him or us again in that regard. In fact, they immediately have Crichton reject the possibility by checking the women’s bathroom and the newspapers, in a direct callback to how he realized something was wrong the last time around. Instead, the mystery here surrounds what or who is creating this illusion, not whether or not it’s an illusion at all, which is the first aspect that allows them to get away with an “Earth fakeout” episode again–because unlike last time, both Crichton and we are on the same page from the start. “A Human Reaction” was all about being as real, naturalistic, and believable an illusion as possible, whereas “Won’t Get Fooled Again” is the opposite.

The second aspect surrounds how Crichton has altered as a person. Back at the start of “A Human Reaction,” John still considered Earth his real home, and it wasn’t until suffering through the events of that episode that he realized that he had fundamentally changed and that, if it came down to having to choose sides between his new friends/family and his home, he would choose his friends. That isn’t to say that he either came to reject Earth or didn’t still wish to find his way back there but that he realized that things weren’t so simple as just going home anymore, if that ever even became possible. He had made a new home aboard Moya and, furthermore, had had so many new experiences that his loved ones on Earth would never be able to identify with nor understand–in the exact same way that his Earth references always sound like gibberish to his space friends. Whereas in the past, Earth was the home he missed, now this fake Earth is making him miss Moya. “It’s strange,” he says. “I miss Moya. A ship full of aliens becomes so normal.” And the fact that he sees all of his friends surrounding him but none seem to recognize him makes him feel even more alienated and alone in this weird, false world.