After continuing our journey with John Crichton last week with “A Bug’s Life” and “Nerve,” our Farscape re-watch continues this week with the twentieth and twenty-first episodes of Season 1. 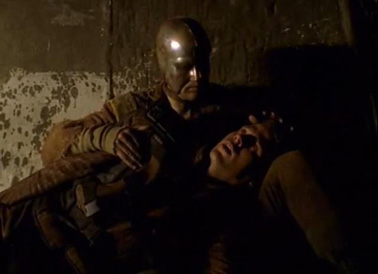 Last week, I discussed how neatly Farscape subverted the “damsel-in-distress” narrative in “Nerve” firstly by having John require the help of two women to save Aeryn’s life and then by having him captured and victimized himself, a weakened and submissive position in which a strapping, young, male sci-fi hero rarely finds himself, particularly to this horrific extent. “The Hidden Memory” goes even further in that regard, being centered on Aeryn mounting a rescue mission for John–Aeryn who has only just begun to recover from her organ transplant and is in no condition to be doing this, her hands still shaky, her body still exhausted and weak. Basically, this puts her in the role of countless male action heroes who butchly shake off serious injuries in the name of bravely doing what needs to be done. And in her case, as with John in the previous episode, she is really the only one on Moya who can actually infiltrate the base, being Sebacean. And also, as with John, she has alien back-up, this time by way of D’Argo and Zhaan, who remain outside, preparing weapons and explosives for the final escape. And although we’ve seen Zhaan be badass before, this is the first time we see fiercely using a gun in a firefight, all in the name of protecting her friends.

Meanwhile, all this time, John is still suffering from the effects of the Aurora Chair, the prolonged, repeated exposure already seeming to cause far more damage than before. Even after a session has been over for a while, he continues to spasm and even has trouble getting words out. This is the point when his cellmate, Stark, truly starts to reveal himself to Crichton and us, as viewers. We learn here that he largely feigns his madness by the chair as a self-defense mechanism, particularly in order to draw suspicion away from the possibility that he could plan an escape–interestingly, however, in later appearances, Stark will often come across as more than slightly loopy. While on the one hand, it’s very possible that this wasn’t planned from the start and was instead due to the writers and producers seeing how excellent Paul Goddard was at playing mad, and realizing that it was Stark’s most distinctive, memorable trait for when they brought him back, it doesn’t come across as inconsistent, because although Stark is certainly playing up the crazy here, it doesn’t mean that his many years of being a slave, and then tortured and isolated in this cell didn’t have some lasting damage on him, even if not as much as it could have been without his unique powers. It could also be read as Stark not revealing the full truth to John, not telling him here the information we later learn about how he absorb pieces of others’ souls when he helps them cross over upon death. Or he just might not realize how crazy he actually is.

For now, however, Stark manages to calm down Crichton’s maddened mind and spasming body by using his special gift. He lifts off his half-mask, revealing the side of his face composed of glowing, ethereal light to John, gently holding him in his arms, and sharing a peaceful memory with him, which proves to be very similar to Zhaan’s Pa’u ability to share another’s pain (and helps explain, at least in part, the kinship and love that builds between them). Rather than taking any of it on himself, though (as he does to an extent, at least pscyhologically, when helping someone cross over), he simply “lends” a piece of himself to John, which helps him temporarily recover. It is not the sort of moment we usually see between two heterosexual male characters on television, and it is beautiful. It also will come to mirror the episode’s final scene, in which he will sadly do the same for the dying Gilina, offering her comfort and easing her fears.

Incidentally, in both of these instances, his powers aren’t depicted in exactly the same way as they will eventually evolve into. The first time is closer, as he removes his mask, but his light doesn’t shine directly onto John’s face, as it would in later episodes, and the second time with Gilina, he doesn’t even take his mask off at all, simply holding a few fingers above her face to transmit the memory of a beautiful place he’d visited as a child, which he’d hidden from Scorpius all of that time. It’s not difficult to handwave this inconsistency, but it is an interesting look at how certain details will evolve over the course of a series. Interestingly, although I’ve seen this episode many times, I always forget that he doesn’t use his usual method here, because that imagery is so strong and indelible.

And speaking of that scene, which is beautiful and heartbreaking by equal measure, Gilina finally pays the price for having fallen in love with Crichton. It’s such an emotionally fraught situation, because John did have romantic feelings for her in the past and continues to care for her, however not only has he changed a great deal since they parted the first time but his emotions for Aeryn have continued to develop in her absence. At the same time, although Aeryn clearly has feelings for him as well, she isn’t anything-resembling-ready to be in any relationship or to even fully admit them. And so, in some ways, John is in the same position as Gilina is, in love with someone who he can’t be with, at least now, and yet he can’t carry on with her, knowing where his heart truly lies. The real tragedy of the situation is that it’s all a matter of timing. They had a potential moment and they just missed it. Who knows? Had she stayed aboard Moya at the end of “PK Tech Girl,” things could have gone very differently for all of them.

On paper, Gilina actually seems the better match. Like John, she’s a scientist, and perhaps more importantly, she is emotionally available for him, right now. In many ways, the writers actually parallel Gilina and Aeryn’s arcs, both being Peacekeeper women who John Crichton inspires to defy their training and “be more” and both of whom would do anything for him, including risking their very lives–Aeryn ignoring her body’s need to recover and charging into a heavily fortified PK base to free him, and Gilina repeatedly hacking into the system and even manipulating the Aurora Chair’s system to protect him–however, whereas the tougher Aeryn is more equipped to survive the upheaval, Gilina doesn’t necessarily have those skills. Unlike Aeryn would have done, she hesitates in shooting Scorpius, instead leaving herself open to being fatally wounded by him. Gilina is arguably the first person who is unintentionally screwed over simply by having crossed paths with John. She dies for the love of him, and he’s powerless to either stop it or force feelings for her that he doesn’t have. At the same time, I always found it very decent of him to not lie to her on her deathbed. He doesn’t pretend to love her, knowing she’ll be gone soon, but in the end gives her the dignity of treating her with honesty. And she doesn’t push the point, instead finally asking him if he could have loved her, if things were different, which he can answer positively, without any hesitation, along with a final kiss.