After continuing our journey with John Crichton last week with “Rhapsody in Blue” and “The Flax,” our Farscape re-watch continues this week with the fourteenth and fifteenth episodes of Season 1. 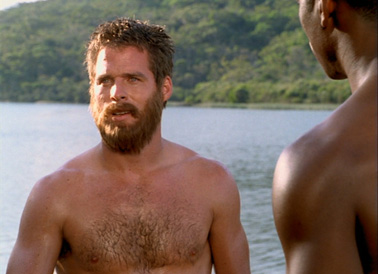 Among fandom, “Jeremiah Crichton” is probably the most maligned episode of Farscape‘s entire run, an episode so universally hated that the DVD commentary is actually subtitled, “When Bad Things Happen to Good Shows”. And it very well might be the worst Farscape ever. But here’s the thing: if this is the worst that your show could possibly do, you know it’s in very good shape overall, because, really, this episode isn’t that bad.

It is far from the strongest hour they ever produced, and sure, the quasi-Polynesian culture on the planet is a bit clunky and possibly a bit…I won’t go so far as to say racist, but poorly conceived in such a way that it can be read as a bit insensitive, even though that was clearly unintended, and yeah, the subplot of the native girl falling in love with Crichton, rather than the ripped man from her tribe who is, for all intents and purposes, her intended, is lifted from Disney’s Pocahontas, and YES, DEAR LORD, the fake beard they pasted on Crichton’s face is TEAR-INDUCINGLY AWFUL (although I was always amused that the Jim Henson Creature Shop could make the most awe-inspiring, lifelike creations but couldn’t produce a convincing face-merkin), but I also always found it completely watchable and even entertaining, with some genuinely good points. This isn’t the genre-busting slice of mad sci-fi genius that Farscape is at its best, but even in its worst scenes, it’s serviceable, and some of its better scenes are a lot of fun.

With that said, this certainly isn’t an episode that needs to be examined in any great depth, so instead, here are the good points:

–The teaser and the set-up are excellent. I love the idea that, after all of this time, John finally hits his alien weirdness threshold and loses all patience with everybody, causing him to go out for a little “drive” in his module to clear his head and get some alone space. He’s experienced more strange and new stimuli in the last few months than most people do in a lifetime and it makes sense that he’d eventually snap and throw a little tantrum like this.

And I like even more that he’s actually in the wrong. After Moya starbursts away, he spends approximately three months down on this electric-power-free-planet thinking that the rest of the crew were the biggest assholes in the universe, leaving him alone to die just to punish him for his snippy behavior, when in actuality, Moya initiated starburst on her own, and it was Crichton’s fault, due to a build-up of amnexus fluid caused by him firing off the last of his Earth chemicals from his module in Moya’s transport hangar.

He assumed the worst of them, because so often up to that point, on Moya, it had been every man for himself, and just when he started to think things were getting better between them, they abandon him, the irony being that, again, he caused the problem, and they never meant to leave him, spending months trying to locate him again (which also happens to foreshadow the start of season 2, and Zhaan, Rygel, and Chiana’s search for Crichton, D’Argo, and Aeryn). The real shame is that we never really get to see Crichton have to struggle on his own at all, due to the time jump, and then after a brief scene between Crichton and D’Argo, the emotions that led to all of this are never touched on again, when they likely should have been the emotional crux of the hour.

–Speaking of which, it’s also of huge significance that D’Argo is the one who demands that they continue to keep up the search, since in the past, he would be the first one to write John or any of the others off in this sort of situation. It shows how much their dynamic truly did change with that handshake in “Till the Blood Runs Clear,” as well as how after nearly letting John die and then feeling terribly ashamed of it in “The Flax,” he is now fully committed to this friendship, going above and beyond to try to find him, even knowing that it was John’s fault alone that he was left behind. This is honestly a landmark event.

I also find it interesting that Zhaan, by this point, is ready to give up the search, despite her own special bond with Crichton, but it’s important to note that it has been a quarter of a cycle, they have done a lot of looking by this point, and Zhaan is a very spiritual person who is probably generally more able to accept loss and the concept of things sometimes happening as they were meant to than a warrior like D’Argo. Now, this might not seem to jibe perfectly with her maddened grief in “Dream a Little Dream” over the loss of Crichton, D’Argo, and Aeryn, but that might also have been the shock of losing three friends at once, as well as the fact that, by that point, they’re all much closer. Also, those three friends had seemed to sacrifice themselves for them and seemed very likely dead, whereas she knew Crichton had a good chance here.

–The episode also affords us the rare opportunity of seeing Aeryn and Zhaan alone together on Moya, having to work together to solve a problem. In some ways, the two women aboard Moya at this point are the most diametrically opposed characters, who have arguably had the most trouble getting past their differences, so it’s nice to see them collaborating. I like that Aeryn gains even further respect for Zhaan when she stands up for herself against Aeryn, as bold as an Peacekeeper, showing her the same intimidating strength she showed the young Tavlek, as well as the fact that Aeryn again helps come up with the scientific solution to getting the message down to their friends on the planet.

–And then there’s the Rygel plot, which I find enormously entertaining. Now, there is the small problem of the uneducated-native-non-Caucasian-tribe-prostrating-themselves-before-a-supposed-god, but the writers also work in some nifty twists on the trope. For one, it affords Rygel an opportunity to feel truly regal again, the only other time being when he had the audience with the Drax Monarch, and in that case, he was basically speaking to an equal, whereas here, for a brief time, he has subjects again. The puppetry is particularly impressive, with his magnanimous little emperor-like hand gestures to the adoring crowd and the subtly imperial look on his face, and Jonathan Hardy–the voice of Rygel–seems to have had the time of his life giving Rygel this moment in the sun.