After beginning our journey with John Crichton last week with “Premiere“, our Farscape re-watch continues this week with the second and third episodes of Season 1. 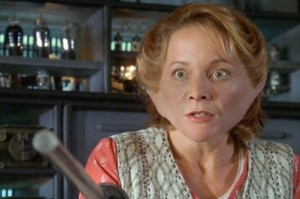 When this episode first debuted in the US, it actually aired far later in the season rather than in its proper chronological order, which makes no sense, given that its driving narrative force is a PK beacon that begins transmitting Moya’s position into deep space as a result of no longer receiving a signal from the control collar. Even as it is, one might question why the alarm didn’t go off as soon as the collar was originally detached, yet the fact that the thread is picked up in the very next episode makes it much more easily handwaveable than how SciFi originally placed it, as episode 7 or 8. The screwy original US airing order also messes with the character development a great deal. These early episodes of Farscape do a delicate, subtle job of very gradually evolving the characters and their relationships. How they relate to each other in this one simply wouldn’t make sense in any other position, as they are all still very much getting a feel for one another as people. For example, D’argo still has zero patience for Crichton at the start of the episode, something which just starts to change by the end. Zhaan and Aeryn–arguably the two most diametrically opposed characters–also get their first moments of understanding here.

Now, I do sympathize, to some extent, with the position that the plot of Crichton becoming the first alien life that the people of an isolated, Earth-like environment encounter might have made more logical sense later in the first season, after he had been away from Earth longer and become more accustomed to life in the Uncharted Territories, but as this is Farscape, I like that it doesn’t follow the general narrative rules. It’s jarring, and deliberately so. Just as in the previous episode, when Crichton stumbled upon Moya just as the people within her were becoming acquainted, here the scientist, Lyneea–with whom Crichton can identify on multiple levels, due to profession, cultural similarities, and from a recent-first-contact perspective–meets a man who she expects to have been an experienced space traveler from a far advanced culture when in actuality he’s just as out of his depth as she would be were she the one sucked through a wormhole.

In many ways, this episode is a Farscape twist on the plot of E.T., which is, of course, referenced in the title, as well as through a number of visual and thematic links, from the nighttime scene in which a group of obscured men search for the aliens, flashlights illuminating the dark–a very Spielberg scene that directly parallels the opening sequence of E.T.–to the fact that John first makes contact with a young boy. And then there is the story, about a “person” helping an “alien” “get home,” or at least as far as she knows. She doesn’t know that he is actually far from his home and not likely if ever to find his way back. But, like Crichton himself, she finds herself drawn to their similarities, as well as surprised by their differences. The gentle kiss he gives her at the end is a great moment where something that is such a typical human gesture to us seems so strange to her, which makes the viewer think about how odd kisses might be when viewed from an outside perspective. The show constantly challenges our perceptions of what is normal.

I also love how Lyneea reacts to John. For a large portion of the episode, although he fascinates her, he also frightens her. When he gets excited by finding the clorium, the anesthetic/healing agent Moya desperately needs, she is genuinely terrified of him. And this “clorium”? Is basically the equivalent of table salt. To her, a completely commonplace condiment (and one which looks a great deal like a completely commonplace condiment to John, too), but which is what Moya needs to survive this ordeal–such a powerful numbing agent to Leviathans that Peacekeepers ban them on board.

Speaking of which, the look of the people on the planet in “I, E.T.” feels like a direct response to Star Trek, because they are distinctly unlike the Farscape norm, being all but entirely humanoid with only a few basic facial structure alterations via prosthetics. In other words, Trek aliens. But it is done very deliberately here, to underline how similar the species are, and how yet even that amount of difference would be feared and probably hated by the people on this planet (and might be on ours, as well, as evidenced by the Earthlings’ treatment of John’s friends in the later season 1 episode, “A Human Reaction”). Furthermore, Lyneea’s first reaction to John isn’t so different from Crichton’s first reaction to Aeryn: “S/he looks so similar yet there’s such difference underneath the surface.” The progression from her first seeing an “alien” who looks a lot like her to finally seeing truly bizarre creatures like Pilot and D’argo (who are already starting to look more “normal” to John and us) is also wonderful.

And while we’re on the subject of coming to identify with creatures from different worlds, this episode also presents the first time that we really come to see Moya as a living being, capable of emotion and pain. While other scifi shows might talk about how their distinctive ship is really one of the characters, rarely is that idea as literal as with Moya. On Farscape, when the ship is in danger, it isn’t only the passengers who are in trouble but the ship itself, and here we see the poor girl in enormous agony. The dilemma is that the Paddac beacon must be cut out of her in order to save all of their lives, and yet it is woven into such a sensitive part of her neural network that the pain of the procedure could kill her. Additionally, the reason they have landed on this planet is to submerge her in a swamp and thus muffle the signal, and yet Leviathans aren’t designed for this and the immense weight of the planet’s gravity is slowing killing her, as well.