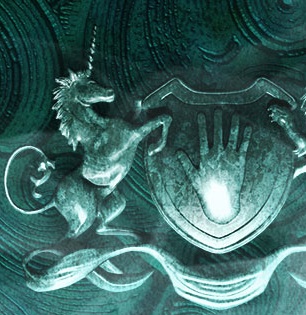 It all begins at nighttime on a dark, gaslit street in Victorian London, with a young woman who seems to only speak French, prone to screaming, bound and gagged in a sack, carried by a brutish-looking man called Ketch, who knocks on the door of a particular house on Wellclose Square that is owned by someone only referred to as “the Jew.” As Ketch tells the three figures who answer the door–one a mesmerizing young man, the second a striking young woman with prematurely shock-white hair, and the third a tall, imposing golem made entirely of clay–“Man in The Three Cripples said as how the Jew would pay for screaming girls.” Thus sets off Charlie Fletcher’s dark, rich, labyrinthine The Oversight, the first novel in what promises to be a brilliant supernatural saga filled with all sorts of hypnotic, magical, and surreal imagery such as terrifying Fae shadow creatures, characters walking through mirrors, an animate Hand of Glory, a formerly pirate cook, contests of sorcerous prowess, cruel Witchfinders turned lawyers, mindreaders, and vivid visions invoked by touching inanimate objects.

The eponymous Oversight is a secret society situated in London that has been bound for countless generations to protect the waking world from the most dangerous elements of the supernatural–here always referred to by the less common (at least currently) variant, “supranatural”–one, which exists outside of most peoples’ conscious purview. It is composed of liminal people whose blood contains both human and supranatural genetics and who thus straddle both worlds, and although there is no limit as to how many members can be in the group at any given time, the absolute minimum is five, which is why it is referred to as a Hand, with each person a separate “finger”. As long as there are five fingers, London and the outside world are safe. But as the ominous nursery rhyme tagline for the book goes, “When they fall, so do we all.”

Now, technically, the Oversight has all but fallen a few times without the world being irretrievably lost to darkness. In times of hopeless crisis, when there are only five members left and they are facing insurmountable odds, the Oversight encloses their most precious magical objects into waterproof coffins that they chain up and sink to the bottom of the Thames, and disbands, all of the fingers heading off in completely different directions, to keep the ember alive until such time that a new Hand can be formed to fight the evil, which is fascinating. The society’s cyclical nature, and the ebb and flow of good and evil in the world is built into its very workings. Rarely does one find a fantasy novel in which the temporary success of darkness is treated as an inevitability at times and that the best way to handle it when there are too few left to fight isn’t to attempt to go out in a blaze of glory but to instead accept defeat for the time being and retreat, living in order to maintain the traditions until the next opportunity to rise up and succeed against evil. The problem this time around, though, is that the rising darkness in the world seems to wants to play for keeps and completely wipe out the Oversight before it has a chance to either fight back or go into hiding.

The last Hand was headed by the historical Rabbi Samuel Falk, also known as the Ba’al Shem of London, who was famous for his studies into Jewish mysticism, such as the Kabbalah, and the occult and, according to Jewish legend, created the only golem to ever walk in London–the very golem who appears in this novel, Emmet (cleverly named for “emet,” Hebrew for “truth,” the word traditionally written on golems’ foreheads to give them life). The current one is run by his granddaughter, Sara, the aforementioned woman living in the house at Wellclose Square. This first novel in what is expected to be a trilogy charts the near-fall of the latest Hand due to a dark conspiracy between a pair of nefarious lawyers–the Templebane brothers–a sinister aristocrat, Mountfellon, Fae shadow creatures known as the Sluagh, and others, and the Oversight’s efforts to stop it from happening.

The Oversight is an absolutely ingenious read, instantly luring the reader from the very first page into a dark web of mystery, intrigue, and magic that only grows more and more complex as it goes along. Despite a dense, complicated plot with a sprawling cast of characters spread across numerous locations throughout England, however, Fletcher maintains remarkable control of his characters, plot threads, and world, introducing each new element with such immense clarity and narrative grace that I never once felt the need to flip back over previously read chapters or even to make use of the Dramatis Personae at the front of the book. He manages the enormously difficult task of imparting an enormous amount of information with the semblance of complete effortlessness, the story building steadily, with a masterful control of pacing and tone, conjuring up an eerie, storybook aura that beautifully complements this story of cryptic goings-on in the foggy, twisty roads and byways of London and the forests across the English countryside. This is a world in which it feels as if the ineffable is constantly lurking just past the corner of one’s eye, always brushing just past the mundane, only ever noticed by those with the power to do so. I don’t believe I’ve read a novel that has so successfully created this sort of darkly dreamy, fantastical atmosphere–part secret history, part steampunk urban fantasy, with elements of horror and wonder–since Susanna Clarke’s Jonathan Strange and Mr. Norrell, which has a similarly Dickensian sensibility, in terms of characters, environment, theme, and plot construction. At the same time, Fletcher’s voice is unique and distinct, simultaneously straightforward and alluringly surreal.

The characters are also all genuinely intriguing. All seem to have secrets within secrets, some of which they keep from one another, some of which they keep from themselves, either willfully or not. And they keep you guessing, one of the best examples being Lucy Harker, the screaming French girl I mentioned in the first paragraph. In some cases, such as Lucy’s, it takes a remarkable amount of time to realize whether any given one is a hero, a villain, or somewhere in between, and even at that, even once you think you have them figured out, they remain surprising and unpredictable, and yet none of the unexpected turns ever feel gratuitous or done for shock value. Each twist makes sense, enriching the characters and story in the process. This also makes it extremely difficult to discuss the story in depth whilst avoiding spoilers. The Oversight is a story that I would very much advise going into with as little advance knowledge of as possible, and just allowing it to wash over you, drawing you deeper and deeper into its powerful spell. It is a novel of vividly realized, strange, wonderful characters, including fully invented creations alongside people from history, legend, and both; of nightmares made flesh; of enchantments that range from the beautiful to the disturbing; and, in short, of enormous imagination.

This is also one of the few times a novel nearly inspired me to audibly cheer at one point as I lay reading it in bed. Speaking of which, the clarity of Fletcher’s plotting is mirrored in the deftness of his action sequences. In the climactic battle, I found myself able to easily visualize everything that was happening in the macro and the micro, tracking all of the characters’ movements within the larger fight, and furthermore finding it engaging, even thrilling, which is no mean feat, as fight scenes on the page tend to bore me.

I reached the final page, desperate for answers to the various dangling threads set up for later installments, but at the same time supremely satisfied at how all of the disparate pieces united in its final moments. The Oversight is a truly terrific novel and one that I can picture myself revisiting many times to come. It’s so good that, even if the saga were never continued or completed, I’d consider it a worthy read, and that does not happen too often.