Meanwhile, the historical allusions, as well as the episode’s embellishments to Andersen’s original tale–such as the aforementioned decree about the fashion shows and a terrific gag that the emperor’s army only has a single member, because the ornate armor that the emperor insisted upon and which is so heavy that the man can barely keep his balance, is so expensive that they can’t afford to clothe, let alone pay, more than one soldier–give the story an added punch, as well as make the emperor’s eventual comeuppance even more satisfying. 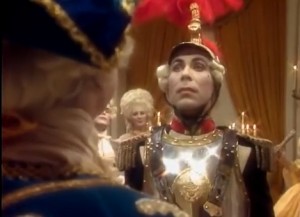 In Andersen’s tale, it may be amusing to see the two con men trick the emperor into parading around naked, believing himself to be clothed in fabric that can’t be seen by  anyone “unfit for office or unusually stupid,” from a schadenfreude level, but the fact that, in this episode, the emperor is actually causing suffering–albeit not intentionally, since he legitimately believes the populace to be thrilled by his attire and doesn’t understand why any subject wouldn’t want to come to his fashion shows–makes the actions of the “tailors” feel more just, particularly given they ultimately give a large portion of their earnings away to the emperor’s subjects, so their behavior doesn’t turn out to be purely selfish, either.

And, furthermore, in this version, the emperor actually learns his lesson. After the boy reveals that they’ve all been ooohing and aaaahing over clothing that doesn’t exist, he realizes how frivolous and selfish he’s been, and actually begins to give money back to the people as well. In the original story, the emperor simply kept marching along, as if nothing had happened, but given that this version had fleshed out the plight of the villagers more, this seems more fitting than simply letting that dangle. And  given how rarely the show actually gave “happy endings” to tales that didn’t have them originally–I mean, just look at how faithful they were to the dark ending of “The Pied Piper of Hamelin”–this feels more than earned. 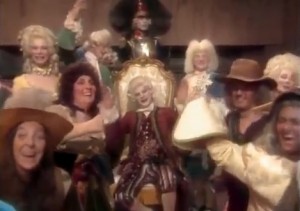 My only truly negative criticism of the entire episode is that as one of the con-men, Alan Arkin assumes a very stereotyped Yiddish accent, which came across as particularly problematic, given that his character is a thief. Now, this is mitigated somewhat by the fact that, by the end of the episode, the character has turned a new leaf, and is actually using his skills throughout to punish the emperor, but it still left a bit of a bad taste in my mouth.

Other than that, after a great establishing scene in which the emperor comes out seemingly entirely nude (we don’t see below the waist, but it’s heavily implied that he’s naked), the next scene, in which he marches in front of the people, we can clearly see he’s wearing underwear, which minimized the impact of the “nudity” a bit. I would have preferred if the camera had continued to simply show him from the waist up and perhaps the legs down, and allow the audience to fill in the blanks. 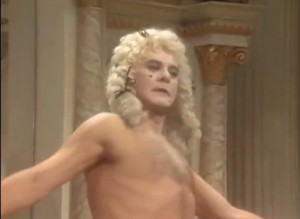 The Emperor, in his new clothes.

Overall, though, a truly terrific episode that is funny and surprisingly biting.

Next: Aladdin and His Wonderful Lamp