And now, years later, I’ve decided to finally revisit this cherished series from my childhood, in order, continuing with the twenty-second episode, The Emperor’s New Clothes, which first aired on October 5, 1985, when I was just over 4 1/2 years old… 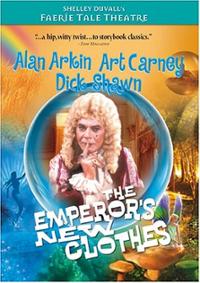 This is an exceedingly entertaining episode of Faerie Tale Theatre. I might even go so far as to say it’s one of the series’ overall best fairy tale adaptations, which is interesting, since it’s one of the rare ones that doesn’t feature any magic. In some ways, it features the opposite of magic, since it centers on two swindlers tricking a foolish, vain emperor into thinking he is getting a magical item when, in fact, he is paying them to give him–literally–nothing. And yet everything about it is practically perfect. One might think that this fairly simple story might have trouble filling out its running time, however the episode rides on the strength of its performances, beautifully tuned humor, with a pleasingly sharpened satirical edge, and elegant pacing.

The brilliant concept that ties this entire production together is the decision to set it in a country and historical period that is highly reminiscent of pre-Revolutionary France. The foppish, pampered emperor resides in a palace that is, for all intents and purposes, identical to Versailles, and prances around in all sorts of resplendent attire, complete with white wigs and powdered flesh, that calls to mind the styles of the French monarchy right up until the point that the peasants revolted, ultimately putting them on the chopping block. 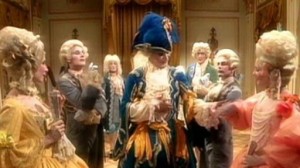 The Emperor in Blue

Even the peasants here bear a striking resemblance to the French peasants that we see in paintings and films about the time period, not to mention the fact that they are all suffering due to the emperor spending all of their tax dollars on constantly replenishing his wardrobe rather than their basic human needs. Anyone who doesn’t attend one of his weekly fashion shows is executed! One gets the sense that would only need a small spark to set off a revolution.

Dick Shawn’s performance is absolutely hilarious sublime, and the same can be said for his magnificent wardrobe, which would have left Liberace speechless.  Although it is never expressly stated, there are more than a few winks as to the emperor’s sexuality possibly being less than completely hetero, but never in a derogatory way. 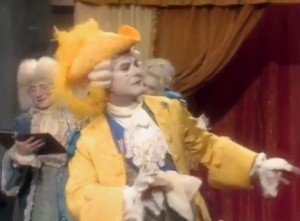 The Emperor in Yellow 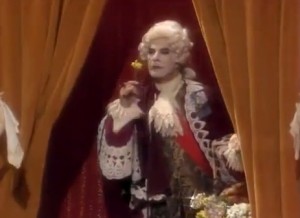 The Emperor and a Flower