And now, years later, I’ve decided to finally revisit this cherished series from my childhood, in order, continuing with the sixteenth episode, The Three Little Pigs, which first aired on February 12, 1985, when I was nearly 4 years old, and which might have been my absolute favorite, as a child… 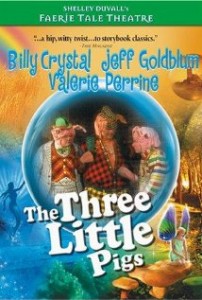 I can’t imagine how many times I must have watched this episode as a kid. I was obsessed. I’m pretty sure it was the first Faerie Tale Theatre I ever saw and I couldn’t get enough of it. I still have a great deal of affection for it and even on this watching continue to feel that it is possibly one of the series’ best, particularly in terms of successfully expanding a very slim story into nearly an hour of television.  While some episodes such as Goldilocks and the Three Bears now feel like they were being inorganically stretched past the point of endurance simply in order to pad out the running time, by the time they got to The Three Little Pigs, they had gotten better about that. As with better attempts such as The Princess and the Pea and Little Red Riding Hood, the adaptation works because it mainly uses character development to create the new material.

Sure, as with the original story, it’s still, at its heart, a cautionary tale against being lazy and sacrificing quality in order to finish a job sooner. The first two pigs lose their houses and nearly their lives to a Big Bad Wolf because they choose flimsy materials for their homes, which they put together quickly and without much thought (and in some versions of the story, though, not here, they are, in fact, eaten up) , whereas the third pig survives with no problem because he took his time and built his home with stronger material. Here, however, it feels less like a simple lesson, because the focus changes to the interpersonal relationship between the brothers and their distinctive personalities.

The oldest brother, Peter–played by Babylon 5‘s Stephen Furst–builds his house of straw specifically because he plans on being one very rich pig and doesn’t want to waste any money on his house. He furthermore plans to strike it big by swindling other people by selling them cheap homes. The middle brother, Paul–the always hilarious Fred Willard–is a bit of a player who stupidly gives away all his money for a pile of sticks, simply because he is dumb with finances and only cares about having an (in his mind) swinging bachelor pad to impress the lady pigs. The youngest, Larry–Billy Crystal, extremely sweet and boyish here–is the only one who actually thinks about his home. He is an artist, and cares about aesthetics, beauty, and structural integrity through careful planning. Ironically, he actually spends the least on his place, bargaining with the salesman to let him have the bricks for free–since they came from an old, collapsed building–as long as he buys a cheap frying pan off of him.