There are some adaptations of Snow White (as well as Cinderella, including the Rodgers & Hammerstein version and the Drew Barrymore film, Ever After) in which the Prince’s path crosses with Snow White’s before the end of the story, such as in the Disney version, to set up his discovery at the end. In the original story, however, this doesn’t happen. Faerie Tale Theatre meets both extremes in the middle. Snow White doesn’t meet the prince beforehand, but we do. He’s a dreamy, wandering minstrel of a man, who spends his days in the forest, singing sad songs about love he doesn’t have but hopes to find one day, which makes him a perfect, comedically overly dramatic candidate for being awestruck by Snow White in her coffin. For such a melodramatically inclined prince, a love he finally found too late would be excellent material for one of his heart-stirringly tragic songs! 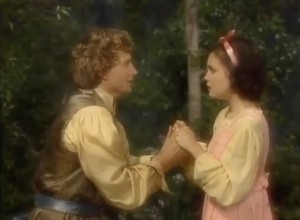 Rex Smith as the Prince and Elizabeth McGovern as Snow White

There is also a great running gag throughout of one of the dwarfs, Bubba (Tony Cox), wanting to tell the prince about the princess who is currently living with them in their cottage, while the other dwarfs selfishly hush him because they like having Snow White around and don’t want her to go. Which also leads to a bit of culpability on their part when she finds herself in harms’ way. Speaking of which, the dwarfs–all of whom are played by little people, which doesn’t always happen in live action versions, and one of whom is actually one of the original Munchkins from The Wizard of Oz!–are a fun, and in many cases, nicely defined bunch. They don’t bear the Disney names, and neither do their personalities match up with the Disney characters, which is a refreshing change from many post-Disney adaptations of the story. They also have a tendency to squabble with one another and to argue pedantically about minutiae, which makes for some good comedy.

As in any Snow White worth its salt, however, the true star of the show is the Evil Queen, here played by Vanessa Redgrave, who gives an ingenious performance. I’ve seen many takes on the role but perhaps none quite as vain as this one, which is saying something. Redgrave’s Queen is so enamored with herself that she has a tendency to not only rapturously gaze at her own reflection in the mirror, mesmerized by it, but spend time lovingly rhapsodizing about her own (in her mind) flawless physical features, hypnotically listing them and reciting practically Shakespearean odes to her own loveliness. 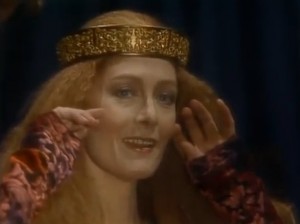 Vanessa Redgrave as the Queen

Being a classically trained actress, Redgrave does a sublime job with all of the queen’s various moods, whether it’s being fully enraptured by herself or furiously chewing the scenery in anger or hamming it up as one of the old crones. In one of my favorite scenes, she attempts to sidle up to the singing prince, outrageously flirting with him, and shocked that he doesn’t seem interested, having completely forgotten that she’s hideous at the moment–gray, wrinkled, and with bristly hair poking out of her nose.

Actually, in this version, the true star might actually be the great Vincent Price, who makes a marvelous magic mirror–certainly one with more snarky personality than most. In this version, the mirror is also the narrator of the story, who, although he works for the queen, seems to secretly be rooting for Snow White. Price gives him a nicely bitchy side. He seems to delight just a bit too much in cutting the queen down to size when Snow White’s beauty begins to outshine her own. There is even perhaps the slightest hint that he only told the queen that Snow White was prettier in the first place in order to spite her, and even though there are no direct lines to confirm it, Price also weaves into his performance some implied remorse for unintentionally siccing the queen on Snow White, as well as, again, amusement whenever the queen is thwarted. (Price was such a pro. At one point, the queen actually throws a ball that hits him in the face and he doesn’t even seem to flinch.) 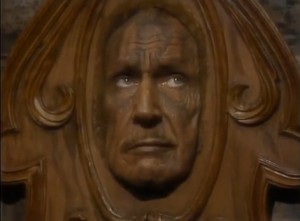 Vincent Price as the Mirror

And he shows particular elation in the queen’s final fate, which doesn’t make use of her original gruesome punishment in the Grimm version–in which she is forced to wear red-hot iron shoes at Snow White’s wedding and dance herself to death–but rather one that demonstrates far more apropos poetic justice and less medieval, Game of Thrones-style torture. It’s actually possibly my favorite ending to any version of Snow White I’ve ever seen or read, which is that the prince’s magician casts a curse on the vain queen that from that point forwards, she who had always adored gazing at her own reflection will never be able to see it again. Any reflective surface, whether it be a pool of water or one of her beloved mirrors will turn to black whenever she looks into it. She winds up on the floor, writhing in agony over the prospect. Now, that is how you truly “kill” the Evil Queen.

Next: Beauty and the Beast