And now, years later, I’ve decided to finally revisit this cherished series from my childhood, in order, continuing with the tenth episode, The Princess and the Pea, which first aired on April 16, 1984, when I was just over 3 years old… 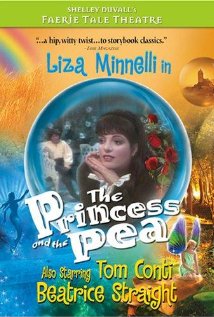 “The Princess and the Pea”

Faerie Tale Theatre‘s The Princess and the Pea is, hands-down, my favorite episode so far of this re-watch, or at least it’s my favorite episode now. I remember liking it well enough as a kid but it not having particularly stood out for me back then, which makes an interesting contrast to the episode before it, Goldilocks and the Three Bears, which I used to be practically obsessed with but I could barely get through this time around.

Unlike Goldilocks, which seemed to reach its natural narrative endpoint and then keep on going for the purpose of filling out the 45-minute running time, Princess and the Pea has been expanded more naturally, in a way that further develops the characters and their relationships from the original fairy tale, much as the series did with Little Red Riding Hood, but the pacing here might be even better, and the comedy sharper.

This is largely due to the central performance by Liza Minnelli, who is perfectly marvelous here (brownie points, if you got the reference). Minnelli’s place in pop culture history seems to often be dominated by the fact that her mother is Judy Garland and that she is kind of a kook, with a string of tabloid-ready addictions and failed marriages. Even in her day, she was known for being such a larger-than-life, brash, brassy sort of performer that some people completely overlooked just what an enormously talented actress she was. Best known on screen as the flamboyant Sally Bowles, one might’ve expected Liza to be playing a similar sort of flashy role here. After all, her character is a princess.

Instead, however, as Princess Alecia, she is warm, down-to-Earth, natural, and absolutely charming. She’s also hilarious and human, demonstrating a keen sense of comic timing (she’s funny throughout but her reaction to sleeping atop the pile of mattresses is truly inspired), as well as of deep empathy. She grounds the entire production in a way I was never expecting. It’s really a fantastic performance that I would point anyone towards to show what this woman could do in her prime, completely divorced from any hint of scandal or celebrity BS–and she doesn’t even sing a note!