And now, years later, I’ve decided to finally revisit this cherished series from my childhood, in order, continuing with the ninth episode, Goldilocks and the Three Bears, which first aired on January 9, 1984, when I was just over 2 3/4 years old, and which was a favorite of mine, when I was a kid… 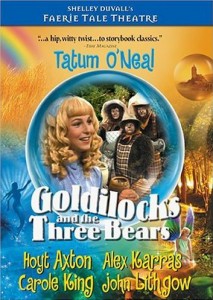 “Goldilocks and the Three Bears”

This one was a bit of a heartbreaker for me and finally completely dispels for me any worries that I’m being overly affected by nostalgia when it comes to which episodes I love and which I don’t this time around, because you guys, I might have rewatched it more times than any other when I was wee little. I absolutely adored this episode.

I’ve spoken before of how, as a kid, I tended to prefer the ones that veered further from the original story, usually due to the story requiring expansion in order to fill up an entire 45-50-minute episode. At the time, though, I just thought it was awesome to see new bits to familiar stories. And when Faerie Tale Theatre does this well, it does it very, very well–Little Red Riding Hood being an excellent example of that–but here, the additions to this admittedly slim story don’t do much more than add screentime. That doesn’t mean it’s necessarily unentertaining to watch–although it does drag a bit once the three bears catch Goldilocks in Baby (here called “Cubby”) Bear’s bed and you realize there’s still half a show left.

In Faerie Tale Theatre‘s version of Goldilocks, our blonde heroine of sorts, played by Tatum O’Neal, is a bit of a brat, chronic liar, and manipulator, and doesn’t really learn her lesson right away. Although she is initially scared away by the bears, later on, she comes to befriend them. Cubby follows her down to her secret hiding place one day, and although she’s initially hesitant to talk to him, she eventually lets her guard down, lying to him that both of her parents are dead, prompting him to take her home. Once there, the bears basically decide to adopt her and they have all sorts of fun together, with her continuing to be dishonest and/or greedy. For example, while they want to befriend other humans in the area by giving them honey for free, Goldilocks comes up with a scheme that will allow them to make a profit: they should simply have her sit at the table to sell it, so they won’t know who they’re really buying it from.

And then in the end, when the sheriff arrives to take her home, she initially lies that the bears had kidnapped her, which horrifies them, until at the last moment, she relents and admits the truth, and they all remain best friends and live happily ever after. Um, ok.

The episode’s problems are numerous. After the original story runs out, it just sort of meanders with no strong narrative drive or purpose. Goldilocks, at least to an adult, is pretty unlikable, and she only seems to get worse as it goes on. Furthermore, her 11th hour turnaround doesn’t seem earned, and does little to further ingratiate her to anyone but a child viewer. Usually, Faerie Tale Theatre did a superlative job of playing to all audiences, even pitching a lot of humor directly to the adult viewers. Here, that doesn’t happen too often, other than two fun gags near the beginning: the first being the bears’ seasonal alarm clock that awakens them from hibernation when “winter” turns into “spring,” and the second, only moments later, is when the mom goes to use the restroom after her long slumber…and only when she comes back to we realize that their “bathroom” is just a door to the outside, which is a great gag on anthropomorphism.

The thing is, I can still vividly remember why I loved this episode as a kid. I loved how imaginative Goldilocks was. I loved that she talked and sang to herself. I loved that she had a secret underground cave where she hid her treasures (I wanted one of my own so badly). I loved that she and the bears became friends. I even remember loving the very storybook sets. Unfortunately, watching it now, I can’t access those same emotions that it once inspired me as anything more than a memory. I can appreciate that it meant a lot to me when I was a kid. I can appreciate how nifty it is to see Tatum O’Neal as Goldilocks, John Lithgow and Carole King as Goldilocks’ parents, and Hoyt Axton–best known today as the dad from Gremlins–as the park ranger. But as far as pure entertainment? Sadly, a misfire.

Next: The Princess and the Pea